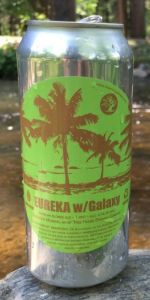 Notes: An elegant showcase for Australian Galaxy hops, this riff on our favorite blonde ale has just the pale malt bill in common with her sister beer, Eureka. Delicate and pleasantly hoppy, with aromatic and flavorful notes of pineapple, passionfruit, and citrus, you'll have a hard time believing this one is so sessionable. Refined and bright, this is the perfect beer for any occasion. We absolutely adore it.
View: More Beers | Place Reviews
Recent ratings and reviews. | Log in to view more ratings + sorting options.
Ratings by ddorsi924:

Only 4.2% but packed with aroma and flavor

Pours cloudy yellow with an inch of white fluff. Moderate retention and lacing. Unripe peach and white grape in the nose. Light bodied with a thinnish mouthfeel. Peach with grapefruit and orange pith on the palate. Finishes dry with lingering pithy citrus and zero malt.

Bought at the brewery yesterday. Canned 12/5/19. Only way to tell which hop was used is there is a little slogan on the bottom above the canning date. This one reads: "In a Galaxy far, far away."

a: Opaque orange with a finger thick white head which receded slowly to thick surface foam and dense lacing.

o: One of the most substantial "session" pales/blondes out there, especially if you are comparing only those called "blonde ale," which tend to be more like a sweetish pilsner. This oe is more like a hoppy American pale or IPA. Tasty enough but the net effect of the hops is not quite in the optimal NEIPA wheelhouse, and it becomes rather unpleasantly bitter as it warms.

poured from a 16oz can into a willi becher pint glass. pours a cloudy yellow with two fingers worth of fluffy white head. smells of oranges, lemons, mangoes, papaya and even a hint of lime. this is a citrusy tropical fruit bomb on the nose. taste is dominated by oranges with a noticeable bitterness to the finish. there’s some of that dank element i typically get with galaxy hops but not as much. this is is extremely fruit forward. like straight orange juice. mouthfeel is quite full for such a small beer. decently thick and beyond easy drinking. this is an incredible blonde ale. so flavorful for a 4% ale. this has been my favorite of the eureka series thus far having tried everything but nelson. this is something you could reach for again and again and not tire of it.

16 oz can poured into a tulip pint glass. Murky yellow with an off-white head and decent lacing. Aroma and flavor a tropical fruit with a light malt backbone. Almost watery, but what do you expect at 4.1% abv? Impressive amount of flavor and mouthfeel for such a light beer.

Eureka is a perfect beer to end my night, easy to drink and so smooth; surprisingly to my taste buds, the Galaxy version does not stand out as much as the other variants I have tried

Picked-up two cans at the Tree House Brewery in Charlton for $2.80 a can, a bahgain. Canned-on date of 10/8, my fifty ninth brew from these guys. Perfect beach beer (working well with college football), like slightly less than the citra version.