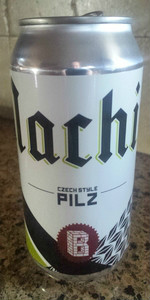 Poured from a 16 oz can; born some time in May '21. A solid czech pilsner - pours straw yellow with plenty of effervescent bubbles and great (initial) foamy head that rapidly recedes. Great subtle hops bitterness with a touch of malt backbone. Very refreshing and crushable. Nicely done.

16oz. can served in my FF dimpled mug. Pours a straw gold with a fizzy, 1/8th inch head that quickly sizzles and pops as it disperses into a thin, consistent dollop. There's a slight haze to the complexion. Nose is grassy and herbal with notes of lemon. Taste follows nose with a slight, herbal bite at the finish. Mouthfeel is light in body with a lively carbonation. Overall, a decent example of the style, but missing some clean, bready qualities I've come to appreciate in the style.

Nothing special, yet solid. I usually shy away for CZECH Pilsners in favor or Germans, but this one drank well without that typical czech pilsner taste.

Nose: Bready, biscuity malt sets the foundation, with a hint of lighter dusty grain notes. Tons of grassy, floral, almost vegetal hops notes, and this earthy, almost sharp funky thing that gives it an almost crude, raw, even savoury aroma to it. I'm sure this is a yeast thing, but it makes for a loud, bold, very strong aroma.

Palate: The malt loses much of the biscuit element, buy remains a bit breast, which lends a base sweetness. Some grainy wheat helps to lighten the malt load. No real minerality to speak of. It remains grassy, floral, green and slightly herbaceous thanks to the hops, which also lend some restrained resinous bitterness. The beer finishes slightly dry, resinous, and bold, with residual breast sweetness, and a siggestion of lemon.

Mouthfeel/Body: Certainly a bit more bold and weighted than some other offerings, particularly in the ABV range - the breast malt adds a fullness, putting this in medium-bodied territory. Still quite crisp and drinkable, the drying hops and fairly lively effervescence help to give this some lift. All together, it remains crisp.

Overall: There are some incredible Czech-style pilsners out there. Is this one of the greats? Far from it. Is it badly flawed? The bold yeasty note in the aroma is a bit off, but it drinks nicely. It will ultimately check the box it needs to, and while it's a bit heavy for the style, the hop balance is quite nice, and it's a very easy drinking, refreshing pilsner.

Can to lager glass.
The appearance was a semi-bronzed yellow color with a subtle transparency about it. A two finger white foamy head sat atop in a rocky sort of way.
The aroma had a smooth semi-sweet biscuity malt flowing into some grassy hops (ever so slight spicy whiff) even further underneath was a touch of floral.
The flavor leaned towards a semi-sweet biscuity maltiness in the same respect as the aroma. Mild aftertaste of some grassy hops and biscuity malts.
The mouthfeel was between light and medium bodied with a superb sessionability about it. I could pound this all day if I wanted to. Nice carbonation. Finishes semi-crisp with a refined semi-sweet malty tone.
Overall, nice lager, could be construed as a German pilsner due to the higher maltiness levels and not enough Saaz hops. Still, it's one I would come back to.

16 oz. can.
Canned 03/18/20.
Moderate to vigorous yields a one inch white head over a nearly bright straw colored body with some sticky lacing. Nose of biscuit, cracker, and slight hops. Taste is slightly sweet with pilsner malt and finishing with the tiniest bit of spice. Good feel and overall, very refreshing, smooth, and well balanced Bohemian Pilsner and worthy of a recommendation. Cheers to the Boys of Bunker Brewing Co.!

16 oz Can poured into a pint glass

Pale gold and good clarity with a slight haze. Lively carbonation forms a firm, creamy, white head. Well-balanced pils malt and herbal hops in both the aroma and flavor. Big and biscuity with a touch of spice at the end. Bitter finish with a solid malt backbone.

A really nice drinking Pils that I could easily have more than one of.

The appearance is a cloudy looking straw yellow with a modest white head that dissolves to a ring. Busy carbonation.

The aroma is clean with a bit of toasted white bread, lemonzest, and grass and floral characters.

Overall a sweet and toasty flavor with a mild to moderate, yet clean and crisp bitterness at the finish. I found it pleasant.

Poured into glass from can. Slight hazey pale gold with decent foam that fades quickly. Smells of straw and toast with a hint of hoppy earthiness. Lots of the hops come through in the flavor. Balance is excellent with prominent bitterness. Very crisp. Overall a stellar local take on a classic continental style. The kind of beer you don't get tired of, would gladly have another.

I was really excited to find this for The CANQuest (tm) while attending their 6th anniversary celebration recently at Hunger-n-Thirst! I CAN always get behind a Czech Pils, no matter what time of day or night.

I was VERY excited to try this one, so once I Crack!ed the vent, I went with a quick C-Line Glug to get things rolling. This action resulted in the formation of two-plus fingers of dense, foamy, rocky, bone-white head with excellent retention. Color was a slightly hazy Pale-Straw (SRM = 1 - 2). Nose had a very pleasant lemony, biscuity quality, like liquefied lemon biscotti. Yum! Mouthfeel was medium. The taste was very crisp, dry, lemony, biscuity & highly refreshing. It was not going to supplant my beloved Pilsner Urquell, but this was quite tasty. Finish was crisp & dry & very refreshing. It was a real bargain at the price point so it might be a worthy Summer cooler CANdidate. I reCANmend trying this one of you see it. Mmm.

This was the best Pilsner I have tasted outside of the Czech Republic what a treat !! Just wish it was priced like beer in Prague were water is more $ than beer !

Pours a slightly hazy golden color, nice frothy off white head with good retention and lacing.
Aroma is peculiar in that it has a slightly barnyard, hay and musky grass scent. There is also a light but acceptable amount of sulfur.
The taste is quite different from the aroma in that it highlights more the subtle but clean, crackery and dry sweetness of the malts. Beyond that, the hops are also well represented in that they provide a moderate grassy prickle, more in flavoring than in bitterness. The palate is dry overall with a slightly sweet and citrusy finish.
More medium bodied than light. There is a fullness of flavor while still retaining some lager like cleanness. The flavors are bright with a fine malt to hops balance. The moderate to gentle carbonation is just right.
Very fine example of an American made Pilsner. I will have again.

A: The beer is relatively clear light yellow in color and has a light amount of visible carbonation. It poured with a half finger high bright white head that died down, leaving only a collar around the edge of the glass.
S: Light to moderate aromas of biscuit hops are present in the nose along with hints of grassy hops.
T: The taste follows the smell, but has somewhat stronger flavors of grassy hops, which contribute a moderate amount of bitterness and mask most of the underlying biscuit malts. The grassiness lingers into the finish.
M: It feels nearly medium-bodied and clean on the palate with a moderate amount of carbonation.
O: This pilsener seems to be a little hoppier compared to other beers in the style and is easy to drink.

Grabbed a sixer on a whim at the packie, was reasonably priced, fresh - & im a sucker for lagers.

In the 1st smell & sip - Diacetyl city. Frankly was a chore to get this one down. Perhaps an isolated event, but IMO thus beer should've never left the brewery.

Enjoyed a couple cans - one poured into a glass and the other straight from the can. So drinkable. Familiar pilsner look - clear, straw gold body with a light fluffy head. Clean and crisp are the prevalent themes - light spicy and floral hops layer atop the toasted bread-body. Crackery-malt goodness. Crisp pop after every sip. Perfect companion beer.

Pours a faintly hazy golden orange color with a finger of bright white head. Not much retention but leaves a ton of lacing.

The aroma brings a good amount of bread and crackers, with a light touch of spicy hops on the back end. Very clean and slightly floral aroma.

The taste is quite doughy and sweet. Has plenty of roasted grains and wheat bread, with some spicy, floral hops lingering on the finish.

The feel is lighter in body with good carbonation. Incredibly crisp and refreshing, with just enough dryness to keep me wanting another sip.

Overall, a damn good Pils that is about as refreshing as it gets. Could drink this one all day.

Crisp, Pops, Clean, Quaffable
You’d never think a Czech Pils would be brewed in Maine, but times are a changin’, and this one is a tasty one at that. Machine Czech is big on the whole crispness thing, and that really quenches the thirst. There’s just enough spicy hopping to go around, and it’s clean across the board while showing off a bit of body. This Pils dries up nicely in the finish; with each sip I’m wondering why the hell it came in a 12 ounce can, I would have prefered a 32 ounce crowler. [Jason]

Dark honey amber color with scant retention. Smells like apple juice caramel. Tastes much sweeter than I'd like. Lots of caramel and nary a hint of saaz. Better than Miller.

Thanks to JLindros for hooking me up with a can.

A - Poured into my Duvel tulip a slightly hazy dark golden hue with a thin half finger head that faded quickly to leave a light blanket and creamy halo.

M - Mouthfeel is a bit thin and watery. Rather light.

O - Overall this was a solid representation of the style. Would pair great with food.

Tap at duck fat in Portland.

Overall this was a nice Czech Pils. I really think people don't understand the style, and since it's not super hoppy and not watery pilsner, they don't like it. I think it was well done.

Pint on draft at Hunt & Alpine in Portland, Maine.

Appearance: Pours a cloudy golden straw with a white head that recedes to film pretty quickly. Lots of lacing.

Aroma: Smells of grass and hops.

Taste: Tasty, dry pilsner with appealing grassiness and a little spice kick. Some lemon and hops, too.

Lighter malt, naturally, but there's a definitive toastiness. No graininess which I like.

Machine Czech Pilz from Bunker Brewing Co.
Beer rating: 86 out of 100 with 109 ratings