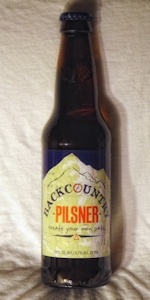 S - NOT A WHOLE LOT THERE. NOTHING HIT ME!

T - FLAT OUT UNIMPRESSED, I DON'T KNOW IF THIS WAS A BAD BATCH BUT TERRIBLE.

This one pours from 22oz bottle a clear straw gold with a large head of foam that settles down but stays for the entire session and has good lacing.

The smell is of malt and it's very sweet on the nose.

The taste on first sip is strong on the sweet malt with some earthiness and a touch of bitterness near and through the finish.
I think that it's similar to a lot of American Pilsners I've had in the past(New Belgium Blue Paddle comes to mind) but it lacks a certain oomph that would make it stand out.

A few more sips in and I'm getting a "salty" flavour that I'm not really enjoying all that much. Hmm....pretty ordinary; I note that the best by date has March notched and a pen mark where 2007 would be so maybe I'll have to try again with a fresher bottle if I can find one. As is, it's pretty ordinary.

Appearance: slear, bright golden color, large, fluffy bone-white cap of foam.
Aroma: floral, honeyish, mildly hoppy, but for the most part, dry. Hits the mark for the style.
Sweetly greets the palate, all softness and smooth. Light bodied, but never lacking in pleasin'ly tasty flavor. Strats bright and sweet, dries out neatly at the end. Exquisite drinkability. I'd like to have this around on a regular basis, to quench thirst at every oppurtunity.

The beer pours a pale gold color with a thick frothy white head that fades to lacing. The aroma is good. It has a grainy pale malt scent along with a dry lager yeast aroma and Czech hops. The taste is good also. It has a smooth malty flavor that boasts of pale malts. It goes down easy and finishes dry and bitter. The mouthfeel is fine. It is a low/medium bodied beer with adequate carbonation. This is a good drinking pilsner. It's got malt presence along with a bitter hop flavor; a good drinker.

Review of the revised Pilsner from Backcountry Brewing. I've left my original review from 2006 below, but the scores posted represent my current tasting, here in June of 2013.

Pours a thin layer of fine white head over a crystal clear pale straw liquid. Nice streams of bubbles feed the head. Smells of noble earthy and spicy hops. Saaz zippy and a bit of lemon. Tastes bold earthy and spicy hops with nice lemony tart and sweet. The ferment was clean with no esters or fusels. At the start, the hops take the beer toward a Bohemian Pils, but they decrease in intensity and zip at the same time a gluten flatness rises. The beer finishes crisp with fine sharp carbonation and leaves lingering earthy hop floral on a dry tongue. Great summer quencher. Perhaps a bit more zippy on the hops for the style, if you are picky about style guidelines.

Review from 2006:
Bottle was a 2006 GABF left-over that was given to me as a reward for my volunteer efforts. Thanks a million to GABF and to backcountry for the opportunity.

Tastes wet sweet. A touch grassy and some oranges. Some sour tang. The sweet becomes a bit much. Aftertaste show a mild and drying hop bitter.

Md body for the style and modest carbonation.

On tap at the Backcountry Brew Pub.

Picked this up at the source, Had this over turkey day weekend, BBD Jan 06

T: Grassy with cirus hops up front Lemon notes & some malts in the crisp finish

Drinks fairly easy, not a bad pils at all

had this in denver, picked it up at davidsons south of downtown. looked like a find and ended up being average at best.

has the saaz hop profile but it ends up subdued. wheaty/grainy and adjunct tasting especially at the finish. I broke this open at a party and most of them thought it was a budweiser. nuff said.

A pleasant surprise. Clear, pale gold with tenacious head and gorgeous lacing, aroma leaves something to be desired, a bit sweet, although a nice pepper note presents. On the palate this is clean, cracker and pilsner malt with a drying, earthy finish. A touch of sweetness and thinness keep this in the substantially better than your avg pale lager but safely out of great. Would buy regularly if available locally.

A - Pours a very traditional straw color that is slightly hazy. Head is nice and thick and about 1 inch. Lacing is stick and sticky. Looks good all over.

S - Slightly muted noble hops with a bit of a citrus-like zest.

T - Very nice and clean noble hop flavor with a good deal of herbal spice thrown in the mix. Gets slightly grainy in the middle of the tongue, but finish is still clean and drying.

M - Creamy mouthfeel that dries well in the finish. Nice amount of carbonation sets this on off on the tongue.

D - A solid and seemingly well crafted pilsner. Give it a try if you can find it.

Medium yellow in color with a soapy white head coating the sides of the glass. It smells hoppy and slightly malty. Mouthfeel is light and easy but dangerously close to watery, taste is a little earthy and not much else. This would be decent for shotgunning outside the ballgame, not that I do that sort of thing.

Served cold from a pig to a pint.

Golden yellow color with good clarity. The really stiking thing about this beer is the lace. I've never seen such perfect lace on a pilsner. It leaves a thin sheet of the stuff all down the side of the glass.

Aroma is pleasant but my nose is so stuffed up it's hard to enjoy. Even so, it's a good pils aroma.

Flavor is also very good. It has a really nice hop bitterness but it's well balanced from start to finish. Smooth and crisp, the spicy German hops are excellent.

Mouthfeel is light in body and moderate carbonation.

Overall it's just about right for the style.

A pretty good pilsner. If you're in the mood for one, this will do just fine. It's not trying to be flavorful and complex, it's just being a really good flavored standard of the type. Good idea really as having something on tap like this, where people only drink miller/bud, they could have this and be really really happy with it. More so of course.

A - Light yellow, nice lacing
S - lagery nose, touch of skunk. Reminds me of miller light, but not in a bad way.
T - Grassy, bitter, grain
M - dry
D - Yep, pretty easy to drink if you're in the mood for a pilsner.

A real nice one, My first try of this brewery I think. It was certainly fresh, as would be expected/hoped buying a sixer just a few miles from where it's brewed. Colorado has some stand-out breweries and after the usual caveats for n=1 and all, this one probably is going to stand out too. I think I'll try another sixer of something else from them in the next day or two while I'm in the state. Good job on this one.