Wolfie Smith
By The Horns 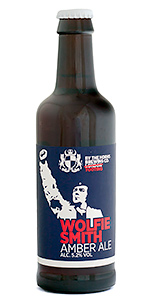 L- Genuinely explosive. This has been sitting in the fridge for a week or two, so no rough handling. Started to open it just now (carefully, as usual) and the bottle blew spraying half the contents over me, my desk , floor, and laptop. WTH caused that! By the time I was back from rinsing out my shirt and cleaning up the floor, the bottle with the cap still on it was still foaming over. That aside - pale bronze, slightly cloudy, thin white head> lacing.
S- [Possible congestion means I struggle to smell anything from this = neutral/2.5]
T- There's a fruit element, mostly slightly citrus/mandarin orange. Quite solid hopping in the middle, and a dry finish.
M- Crisp, dry, refreshing.
O- This beer, or what was left of it, was OK. But given half was lost it was expensive for the half that was left. Plus, rather than a moment of relaxtion it gave me a clean-up job.
I noticed as I was about to pour another beer, that at the bottom of the glass were dark-brown specks, almost course sand-like grit, although they had no texture. They were different to the usual smooth tan sludge you can get in bottle conditioned beers. I don't know if that's linked to this one blowing, but if the brewers follow reviews here the BBE is 08/2018, there is no visible lot/batch number. The mark-down for blowing it's lid is reflected in the Overall rating, rather than the 4 elements above.
Bought from either WholeFoods, Tesco or Waitrose in West London. The lable has changed [due to copyright?] from an image of TV character 'Alfie Smith', to a gorilla striking the same pose. The background is also no longer plain blue, but likely some kind of artistic play on the Union Jack flag.

Sampled at THT June tasting. Pale amber-orange with no head. Hoppy and bitter, leaning towards an English IPA, with notes of grapefruit, pine and some plastic.

Amber coloured.
Smells malty.
Tastes malty, with hops in the background. More like a non-complex bitter than a red ale.
More reverend than revolutionary.

The colour is gold-amber-red (30 EBC), the liquid is clear. The three finger head is off-white, it sinks slowly leaving some thick lacing on the glass.

The smell is hoppy and bitter with notes of biscuits/cookies and alcohol. Some wax/stearine hints, too.

The taste is very bitter at first, the flavours are hoppy and floral. It is soon replaced by herbal notes and biscuits. Medium sweetness, medium body. The aftertaste is bitter, too, with bitter oranges and Digestive biscuits and bitter herbs. The finish is bitter with some alcohol.

The carbonation is strong, the large bubbles long-lived. The liquid is a bit light.

A pleasant and bitter amber ale.

Wolfie Smith from By The Horns
Beer rating: 3.28 out of 5 with 6 ratings