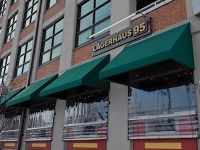 went there on a sabers game night and used a livingsocial deal they posted. The layout is pretty open to accommodate crowds and there is a beer garden located in a separate, but attached room. The specials and regular menu lineup were great and I ended up getting the turducken panini accompanied by a 12oz goblet of Brooklyn Sorachi aces (which was on special for a great game-night price). The muscles were also tasty.
The place had mainly german beer's and imports on tap... duh it's a Lagerhaus... and it filled up quickly after the game let out. Parking is ridiculous on game nights... BE WARNED.

The place was a little pricey, but I can't say the beer's were overpriced... especially not with a livingsocial deal.