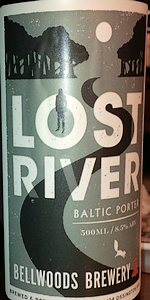 Notes: Aside from the impressive accolade of being awarded a gold medal at the Canadian Brewing Awards in 2012, the Lost River Baltic Porter is still down to earth. I would even go as far as to say that it's like the comfort food of our beer selection. Chocolatey, roasty, and slightly sweet rather than bitter, this beer packs tons of flavour without being cloying or overpowering. Enjoy this well-balanced brew all year round. Don't let those patio police tell you what to do.
View: Beers | Place Reviews
Reviews: 22 | Ratings: 74 | Log in to view all ratings and sort
Reviews by LanceH:

Poured from a ~one month old bottle into a wine glass.

A- dark brown, almost black, with a quickly dissipating dark-ivory head. High carbonation evident, but with the head would have stuck around.

S- milk chocolate, with a bit more roast than is appropriate for style. As it warms, I get the faintest hint of chocolate covered cherries-- I do love Baltic Porter more when it's an ale.

T- again, more sharp roasted malt notes than I like in the style, but the balance is still toward the sweet, chocolatey side of the equation, where it should be. Long, semisweet finish.

M- a bit on the thin side, with enough carbonation to keep it interesting.

O- an enjoyable offering. Perhaps not the perfect, by-the-books exemplar of style, but a tasty beer all the same

Really good brew ($$). Picked up a 500 ml bottle from Hafis rd. locale. This porter is really smooth despite the higher alcohol level. Pitch black in colour with good head, lacing and retention. Would drink again.

A solid porter, though not the sour edge I would expect from a Baltic porter. Very dark brown and a thick pour. Cream chocolaty aroma, and that's what it delivers: a roasty chocolate,licorice, creamy beverage. Above average mouthfeel. Very good drinkability.On tap at The Only Cafe. Sorry mates, they would only serve me half a pint. Satisfying aftertaste.

Had this on tap at the brewpub. The liquid in the goblet is pure black with the slightest edges of amber. The tan head recedes pretty quickly but musters up a lot of lace. Chocolate, berries, roasted malt and leather show in the nose. The taste dominated by malts with lots of fresh cacao, dark roast coffee beans, fruit compote and marmalade showing. Herbal hops provide a bit of bitterness and aroma but otherwise don't distract from the malt onslaught. The mouthfeel is full bodied and veering on slick with a rather light carbonation. Alcohol is well hidden throughout.

I'd recommend this beer to any porter/stout fan or malty beer lover. Very complex and heady.

Lost River is black as a stout and has a head almost as dark as a brown ale, all this despite being labeled a Baltic Porter. I know what they say about not judging books by their covers but there's no way a porter this opaque won't be more substantial than normal.

Both the aroma and taste combine chocolate-fudge brownies and black coffee. Despite these strong flavours, however, the porter is distinguished by a huge splash of bourbon vanilla - there's enough of it to bake a cake with. This is an incredibly rich rendition of the style.

Indeed, while chocolate ganache and espresso are delicious flavours, they are more reminiscent of Imperial Stout and aren't necessarily inherent to traditional Baltic Porters (certainly not in this quantity). This, I suppose, is why some have taken to calling beers like this "Imperial Porters". Whatever the inspiration, this 7% beer is rich enough to pass for a 9% stout.

It does, however, maintain traces of the port-like fruitiness (blackberry especially), dark caramel-like sweetness and black licorice notes that brewing judges would look for. Two other features that meet the criteria: the beer feels oily and sleek over the palate and its smoky roast falls just short of burnt. Makes for an entertaining mouthfeel.

Bellwoods Brewing brought brazen character to a fairly bridled Ontario craft beer scene. They weren't the first to revamp traditional styles with bold, modern interpretations but few (if any) were making beers good enough to make people in states like California, Michigan and Illinois jealous. Any Ontario trader in need of trade bait need look no further than Ossington Avenue.

Bottle from the brewery. Served in my Bellwoods teku.

A - Generous tan foam settles to a solid cap, thicker collar, and splotchy lacing. Near black body with some mahogany at the edges of the glass.

T - A bit more charry and acrid than the aroma. Lots of coffee bean, smoke, and bitter dark chocolate. Very bitter in the finish, with a touch of estery alcohol. Well-attenuated and with an acidity that is evocative of authentic Scandinavian Baltic Porters.

D - It is spot on for a Baltic Porter and reminds me of something I'd have from Norway or Finland. Wish the flavor had some of the sweetness of the aroma, as it gets a bit fatiguing near the end of the 500ml bottle. Also seems stronger than the listed ABV.

Thanks to jrenihan for this one.

Appearance: Pours a really opaque body, thick but barely gives a millimeter or two of foam before disappearing with barely a trace.

Smell: Wood, some smoke, roasted, a coal-like aroma with some coffee.

Taste: Roasted flavors mix with a bit of coal, cold coffee, chocolate and some smoky wood. A bit chalky though.

Mouthfeel: Carbonation is annoying and too high at first though it calms after awhile. Robust with some bittering and a nice lasting impression.

Overall: Uneven, especially in the feel of the body. Good but not great for me.

Picked up by my brother nwfodder at the brewery. (I heard it was quite the trek)
650mL bottle into Bellwoods tulip.

Sweet dark chocolate, fresh ground coffee, and a touch of peanuts or cashews... Coffee cake with some vanilla and brown sugar. Touch of molasses.


Lost River Baltic Porter from Bellwoods Brewery
Beer rating: 89 out of 100 with 74 ratings