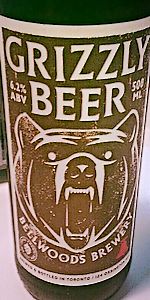 Notes: This sessionable ale falls somewhere between a porter and a black IPA, with a nice interplay of robust and bitter characteristics. Named after a ferocious beast, this beer is every bit as fierce. Appealing to those who can’t quite decide between pleasing carmelized malt flavours, and pungent hoppy bitterness. Do not underestimate the power of the Grizzly!
View: Beers | Place Reviews
Reviews: 14 | Ratings: 55 | Log in to view all ratings and sort

Bottle: Poured a medium brown color ale with a large off-white foamy head with good retention and some lacing. Aroma of caramelized malt with light citrus notes is quite pleasant. Taste is also dominated by caramelized malt with light citrus notes. Light nutty notes are also discernable. Body is light with good carbonation. Good drinkability with just the right amount of complexity. Nicely done for the style.

Bottle from Bellwoods. Served in a wine glass.

A - Dark brown body with a reddish transparency to it when held to the light. A finger of tan foam settles to a near-complete cap, thick collar, and splotches of lace.

S - Mix of piney hops, a kiss of grapefruit rind, nutty and roasted malts, a touch of baker's chocolate. Pretty nice and spot on for the style.

T - Taste is a little less exciting. More brown malt, less hop flavor. Roasted nuts and milk chocolate dominate, with a high of caramel in there for good measure. Hops show up late, lending a moderate bitterness that feels like a tad too much.

M - Medium body, with pleasant, active carbonation, and a dry toasty finish. Texture is soft, with a touch of grain to it. Not perceptible alcohol.

D - It's a well-crafted American Brown Ale. Not the sexiest of styles, but an enjoyable take nonetheless. Would drink this on occasion as a change of pace, but not something I'd crave.

S- 4. Very good. Lots and lots of malt. Hints of herbs and yeast

O- 4- Pretty good. Nice break and refreshing. A bit too expensive though at $7.00 or so for a 500ml bottle at their shop

This was just a little 2oz sample before a Bring Out Your Dead because after a sip of that RIS all flavours change.

Sweet, yet roasty. Liquid has a cold pressed coffee tone to it.

In my opinion one of the best brown ales you can get. Thank goodness this is semi regular at bellwoods.

Ages extremely well. Cracked a year old bottle not too long ago and was wonderfully surprised. Can't recommend enough.

Appearance: It has a nice dark brown (cola like) color to it. It has a nice frothy tan head that dies down moderately and leaves some nice lacing.

Smell: The aromas definitely give out hints of citrus, pine resins, roasted malts, chocolate and a slight nuttiness.

Taste: Like the aromas, it has a some citrus, bitter pine resins, roasted malts, chocolate/coffee, a slight earthiness and some nuttiness.

Mouthfeel: It has a low/medium carbonation with a nice overall balance and feel.

Had on tap at the brewery, then this review from the bottle a few days later. Poured a solid dense tan head, a really dark body, dark brown nearing black. Great lacing and film retention.

T - robust dark malts with a coffee and breadiness. Pine resins but tempered by a robust malty character, bready, with grapefruit, lots of nice hops, some lemony florals, overall it offers a satisfying tasty take on the style, some coffee notes with a northwest hop mix. Finish is dry, piney.

M - smooth, with a robust body and balanced with a strong hop character and an intense coffee/espresso bitterness. Full bodied and satisfying. Finish is dry, bitterness is restrained.

Overall, it is a well-made robustly hoppy brown ale. One I would certainly recommend. Definitely very nice, good dose of hops and the malty body stands up very nicely, this brewery is great in general and I highly recommend them, this maybe isn't their best beer, though it offers a really nice robust hoppy brown that is mighty tasty.

A. Poured into a standard pint glass. Deep mahogany color., so dense that even when the glass is held to the light it maintains the density of color. Light foam head that quickly dissipates, leaving quite a bit of lacing on the glass

S. Aromas of rye bread, ovaltine and a hint of cat pee.

T. An initial hit of spice and caraway with a lingering hint of tangerine and lychee, but leaves an aftertastes as if you just licked a penny.

M. Very light carbonation and despite the dark appearance, a very light body.

O. Overall I find this beer a bit too spiced for my taste. Tastes more like a piece of pumpernickel soaked in orange juice than beer. Probably would not buy again, given the plethora of other better Bellwoods brews.

Pours a bright deep red color with glowing edges - looks great. Huge off white head quickly recedes to a few patches blanketing the glass with lace. The aroma is of grapefruit and lemon hops mixed with a doughy maltiness. The taste is juicy grapefruit hops mingling with a dry roasty malt profile. Bitterness builds with warmth, as does a dark fruit sweetness and roasty maltiness. The mouthfeel is quite light bodied with a light to moderate carbonation. The finish is moderately bitter with hop aromatics and malty roastyness lingering for a while.

Amazing take at the Brown Ale style. I highly recommend this benchmark example of a 'new world' take on the style. Seek this out.

Poured on-tap and served in a shaker pint, the beer is a dark brown coloring with ruby highlights and a filmy, clingy, light tan colored head. Nose of roasted nut and chocolate, with earthy highlights. Flavors are roasty forward, with rich chocolate and nut sweetness to follow. Subtle hops bitterness at the tail end, which helps clean the palate. The aftertaste is roasty and sweet, with nut and coffee characteristics. Lingering finish of bittersweet flavors. Smooth and robust in mouth. Very tasty!

Grizzly Beer, probably not coincidentally, has a similarly coarse, brown exterior to that of a grizzly bear. Mind you, it is not nearly as intimidating (though as we're soon to find out it is almost every bit as weighty). Gemstone highlights don't exactly lighten the beer but do reveal a bit of translucence. Its head is buttermilk coloured and the lacing as clingy as a little brother.

If you've ever cracked a tree stem in half and exposed its resinous, green interior then you can easily catch the drift of this Brown Ale. It smells strongly of flower buds, tree roots and bark, dark green leaves and conifer cones so big you can imagine kicking them across the sidewalk. It is extremely fragrant and the kind of aroma that could make even the forest jealous.

The mouthfeel has a tree bark-like texture: dry and pithy. There are also similarly dry and pithy notes like those of citrus peel. Though it is underscored by a very raspy and 'green' plant-like note, the hoppiness is wrapped in enough roastiness and chocolate sweetness to keep it from tasting too acidic or juicy. It has the malt depth one wants in a Brown Ale.

Like seemingly every single one of their offerings regardless of style, Bellwoods Grizzly Beer is far too serious to be an entry-level offering. It's as if these guys went from kindergarten straight to Stanford. Then graduated with honours. This is a solid Brown Ale with extroverted hoppiness and toasty, bittersweet maltiness - it is a beer designed to impress and, indeed, it has.

(4.25) A: Deep and dark brown with a reddish tinge around the edges. Good height of creamy tan coloured foam head that stays put for a good length of time and very good lacing.

(4.25) S: Pine, grapefruit, raisins, plums, caramel, and roasted malt notes as this warms. Variety of aromas that work well together. Definitely hop forward but some appealing dark fruit elements poke through along with a smooth chocolaty nose. Very nice.

(4.25) T: Mellow pine, juicy tart citrus fruits, licorice, herbal qualities, and a probing roasted malt taste in the form of cocoa and lightly roasted coffee bean. This is very smooth and velvety. Everything comes together very well here, similar to the aroma.

(4.25) D: This is one of my favourites from Bellwood’s that I’ve had to date. Full and robust taste with a great variety of flavours. Would definitely pick a couple more bottles of this up.

A - Medium brown; opaque. Half a finger of light brown head.

S -A big nose of citrus and piney hops with some chocolate, roast and sweet brown sugar.

T - Bitter up front with pine and grapefruit flavours. The hopping doesn't overpower the malt bill, and some nice roast and chocolate flavours are present in a good balance.

Deep brown colour with some ruby in the light, one finger of dense off white head, good lace down the glass. Smell is loaded with pine, hop heavy with some dank citrus fruits, some darker malts, subtle sweet bready notes but this is a big hoppy brown beer. Taste is similar to the nose, lots of sharp pine flavours, malt is a little more pronounced, lightly roasted in the finish with some chocolate, lots of hop bitterness throughout, citrus hop aftertaste. Lightly carbonated, medium body, easy drinking as this went fairly quick. Quite the good beer here and easily mistaken for a Black IPA, supper hoppy and quite drinkable, would certainly entertain this again.

Beer is dark brown in colour, with a small beige head. Decent lace.

Nose is quite hoppy, but with a nice malt backbone. Bright citrus fruit, some pine. The malt contains chocolate and roasted nuts. Nice mix, the malts and hops complement each other well.

Taste is similar to the nose. Malt perhaps a bit more upfront. Nuts. chocolate, a bit of roast malt, citrus and some pine. A hint of vanilla. Nicely balanced, a strong hop flavour but still lots of malt. A touch of sweetness, though balanced against the bitterness of the hops.


Grizzly Beer from Bellwoods Brewery
Beer rating: 87 out of 100 with 55 ratings