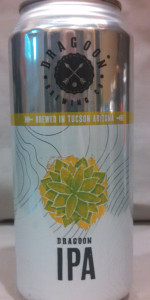 Notes: This is a true West Coast IPA–it is pale in color, with with bracing bitterness, high alcohol content (about 7.4% abv) and a fruity/floral/citrus hop aroma. It is made from a simple malt bill: North American base and pale caramel malt. We use copious amounts of Northwest hops (Summit, Columbus, Magnum and Zythos) all throughout the boil, with most of it going in within the last 15 minutes. After fermentation is complete, we dry hop it with approximately 1 boatload of each of the same hop varieties.
View: Beers | Place Reviews
Reviews: 63 | Ratings: 277 | Log in to view all ratings and sort
Reviews by AzIpaGuy:

The appearance was a nice looking hazy orange to amber color with a one finger white foamy head that dissipated within about a minute leaving some light lacing trickling along the glass. The smell had a floral and citrus hoppiness up front letting some light caramel malts try to balance but still the hops are on the main stage. The taste was a very nice bittersweet floral to citrus flavoring with a delicate light extra fruitiness. On the palate, this one sat about a light to medium on the body with a fairly decent sessionability about it. The carbonation was somewhat sharp but placed itself on the harshness as it rolled over my tongue. Overall, I say this was a pretty good AIPA well worthy of having again.

A fresh can brought back by Jay from Ameristop. Thank you Sir!

L: a very clear, copper color with a thin off white head.

A: Wow, fresh earthy, dank hops punch you right in the nose. Earthy, spicy and a little floral with a small amount of sweet honey-like malt come through.

T: pretty amazing IPA. Puts me in mind of classics like Sucks and Bodhi. Hops hit you then some sweetness followed by a blast of hop bitterness.

F: A bit thin is my only complaint. I wish it had a little more malt to stand up to the hoppiness. Very astringent,dry finish.

O: Really great beer. If I didn't live near Columbus and have Bodhi so close at hand I might seek it out more. A standout in a sea of average IPAs. I definitely enjoyed it though.

Poured a clear amber body with abundant bubbles and a foamy white head that receded to a foamy cap of lace. Overall impression of appearance is of a very nice IPA, quite enticing. Scents of grapefruit, earthy, vegetal hops with an onion quality, tropical fruit particularly guava and mango, spicy hop aromas, a hint of sweet malt backbone and notes of pine resin. Overall impression of aroma is of the perfect West Coast IPA, I have found few that can touch the balance and depth on display. Flavor begins wonderfully hoppy, with notes of earthy, dank, vegetal hops, imparting that nice oniony flavor, along with abundant notes of grapefruit rind, pine resin and light notes of tropical fruit. Middle continues these flavors but increases hop bitterness from medium-high to high and increases the intensity of grapefruit and pine resin. Finish is dry with notes of pine resin, earthy, dank, vegetal hops, grapefruit peel and pith, pine resin and a nice hop spiciness and a very light balancing caramel malt backbone. Aftertaste is nicely bitter with notes of pine resin, grapefruit peel and earthy, dank, vegetal hops. Overall impression of taste is of a fantastic West Coast IPA. Again a perfect balance of hop flavors is reached, creating a wonderful whole and one of the finest examples of the style I have tasted. Mouthfeel is medium-light bodied with medium carbonation and a sticky, resinous mouthfeel. Again, near perfect for the style, nothing at all to fault. Overall this is one of the finest West Cost-style American IPAs I have had. It has a near perfect aroma, flavor and mouthfeel, representing the best of the style and showing that the best Arizona breweries can easily compete with the California big boys.

Great, well-attenuated West Coast-style IPA, good and bitter, and with a punch of citrusy and savory, almost weedy (or, if you prefer, cat piss) hops. I know the latter aren't everyone's favorite, but I think they work well here. Tasty stuff.

(Edit: this is now in cans, and I think my appreciation of it grows with each popped tab. This is like über-fresh Torpedo with a splash of Blind Pig and maybe some Hop Stoopid too, piney, grapefruity, herbal/savory, floral even and with enough bitterness to make you cry uncle. Clearly, in this age of tropical smoothie IPAs and the like, this sort of brew probably won't win any popularity contests, but for those of us who enjoy them good, pungent, bright, and bitter, this is the bees knees.)

(Latest update 4.4.16: I'm just gonna keep updating, because my opinion of this beer continues to evolve, and in the best possible way. 3.10.16 canning, almost a month in the can now, and this beer hasn't let off the gas one lick. Still dank, pungent hops, grapefruit and pine, like someone grabbed a handful of hop cones and squeezed their nectary oils into the can. Utterly tremendous, to the point that, outside of a few staples like Union Jack and the like, I'm not sure I need to drink any other IPAs.)

Great all around IPA. Strong hop presence but not too bitter. This one would be great to drink with just about anything. If you like west coast style IPAs this is a must try!

Deliciously bitter IPA. Tons of hops and tons of bitterness. Also a good balance of sweetness in there which makes it stand out. Love when I can find a great local beer.

Appearance: hazy yellow in color with a 1/2" head that falls quickly. Some lace develops.

Smell: some dank bitterness is detectable by the nose.

Taste: caramel, tropical fruit sweetness, some dank bitterness and a hint of alcohol.

Mouthfeel: medium bodied beer. Lightly crisp throughout. A bit dry at the finish.

Not a bad brew

Sampled Time Market, Tucson AZ; April 2012
Arrives from the tap with a one-finger thick, pale tan colored head, nice and creamy; the head leaves some nice, layered lacing on the sides of my pint glass. The beer is a brilliantly clear, light copper color that has gold highlights to it. The aroma has a huge tropical fruit note to it; lychee, pineapple, and kumquat zest plays a huge role. After taking a couple sips, I can notice some touches of cracker like malt, and perhaps a hint of biscuit character. Surprisingly the herbal side of the hop character is quite muted here (as opposed to the flavor). I really like the super-hop-fruit character / focus that the nose has.

A lightly biting bitterness as it first hits the palate, the beer soon gets more aggressively bitter as if flows across the palate, even picking up some green, hop astringency that melds into a lingering long lasting bitterness in the fininsh. The fruity hop notes play a secondary role in the first sip, and the beer is a bit cold as well, which likely down-plays the fruit character. Quite herbal, with notes of woody pepper, tobacco and a definitely dank, “hemp” like hoppiness plays a bigger role than the fruit in the flavor. There is just a touch of pine character here, most of the flavor is definitely herbal in character. The body has a medium’ish heft to its lightness; this is most definitely a quaffable IPA; in fact the fruity hop flavors are likely sacrificed a bit to the alter of drinkability. There is a nice level of prickly carbonation to this beer, not overly gassy, and definitely lively enough, and just about perfectly carbonated for a kegged IPA. After my palate has adjusted to the hop onslaught the malt character starts to peak through just a bit with notes of whole grain (though not brown) crackers, and perhaps a touch of biscuit / crystal malt character; this last is fairly subtle and I really like that this is kept focused on the hops. Fruit character really starts to come out as the beer warms up (just as I expected); there is an explosion of lychee, pineapple, candied kumquat zest, and a really big floral sort of fruitiness.

This is most certainly a west coast, hop focused, interpretation of the IPA style. At one point in my beer journey, I would likely have labeled this as scathingly bitter, especially given that this beer, the first batch ever from the brewery I might add, is only in its second day of being out in the world, my hop-head / saturated palate though now finds this pleasingly biting in its bitterness. An incredible first offering from this brewery. Get it fresh to enjoy the aggressive hop focus. I can’t say I am surprised, but damn, it is nice to see a brand new brewery nail their first beer ever right out of the gate. Consider me a full on happy homer. My biggest complaint is that this beer is being served out of a pint glass; this is a huge disservice to this beer (and any IPA), as much of the hop nuances are quite lost in this format, I can’t wait to have this fresh out of something that helps focus the aroma. The fact that the hop fruitiness starts to come out, in a big expressive manner, as the beer warms up, makes this that much better; the dank herbal and fruit become evenly matched & the flavor achieves a purely hop focused balance that the best IPAs need to achieve to approach perfection.

Solid ipa. On tap at ohso. Very fresh and very drinkable. Orange colour. Medium mouthfeel. On cask dry hopped with dr rudy and 721 at the source is even better.

On draft at a local brewpub, this is one seriously bitter hop forward beer right here. Wow...

Beer is amber / orangish with a little haze, a nice stiff white head that is fed from aggressive carbonation, lots of retention.

Aroma is fruity and sweet with a lot of hops.

Beer is medium in body and chewy from the hop resin, earthy and floral with a lot of bitterness at the back, a very nice IPA and I'd have it again.