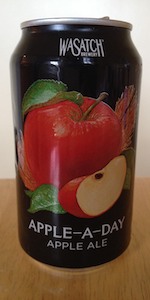 Bought this June 2015 in Utah. That was a fun trip. Yes I aged it like I do with my ciders, even though it’s still a beer. I imagine it does taste different fresh but this was still surprisingly good, for a Fruit Beer, and for something not generally intended to be aged.

Golden yellow, just hazy enough to seem milky and amber-tinted. Light, fine, frothy, uniform off-white head of mediocre retention with curvy patches of interconnected lace. Almost looks like a filtered Hefeweizen. Smells like a mix of wilting red apple core, a hint of fresh cider, and yeast, actually pretty good. Taste is less sweet and more tart than expected though still closer to red apple than green, very natural and delicious flavors. Plenty of yeast character right after initial fruity sharpness, almost warms the mouth on its own, not the same as alcoholic heat, gaseous, aerated, but not so much fumey. Finishes just as apple-like as initial sip. Light-bodied, appropriately acidic but still evidently a beer, with fine, medium-carbonation ranging from crushable suds to tingly spritz. Compare to any number of other apple ales, it is less sweet, more natural, more dry, more thin, more vinous/yeasty, but still closer in some ways to one in terms of flavor and carbonation than your average cider. Ciders are what I would call smoother and more robust in flavor.

12 oz can pours a hazed gold with a modest white head. Not much for retention or lace.

Nose is straight up Green Jolly Rancher candy. That is all. Though as it warms a little bit of apple pie and cinnamon discs come out.

Taste is not as sweet, but this weird, astringent fruit skin apple flavor is just not very good. This is like the anti-New Glarus Apple Ale. Its better than some of those overly sweet versions by Redd's, etc...but I cant find myself wanting to revisit this one again.

Wasatch Apple-A-Day has the thinnest little white head, a clear, pale golden appearance, no bubbles, no lacing, and a few tan chunks suspended in it. Aroma is of stinging, sweet, and slightly spiced apple cider, with a back note of malt, and the flavor is of green apples, apple skins, some bread, and no bitterness. Mouthfeel is thin and prickly, and Wasatch Apple-A-Day finishes crisp, fruity, and easy going.

Smell--Apples and more apples. Maybe a light bit of bread or maybe wheat.

Taste--Apple up front, though not as sour I was expecting, which isn't necessarily a bad thing. The back has more of a bread taste to match what I thought was bread or wheat on the nose.

Overall--To me this definitely more of a beer than something like Redd's Apple Ale, and tastes less like a cider than some of these do. Not the best fruit beer or ale that I've ever had, and not the best Wasatch offering, but very solid.

Smells of apples and that is about it.

Starts out slightly sour with a strong apple flavor. Distinct taste of soda cracker to this that makes me think of wheat malt.

Overall another of these beers that wants to be both a beer and a cider.

Poured into a pint glass a very nice clean/clear golden light yellow color, very nice carbonation, very nice one-finger plus white foamy head, which leaves some sticky lacing. The nose is not bad, mostly apples, but some floral notes thrown in, slightly malty. The taste is not bad either, I really was expecting more, but apple notes are most abundant. Light-Medium body, slightly dry finish. Overall not too bad, but I was expecting more from this one. There are better out here, but not with the higher ABV.

Sampled last night on 11/5/14. Can chilled down to 36 degrees F in my beer cooler and poured in to a handled glass stein.

Pours a crystal clear lighter yellow in color with a very thin white head that doesn't last. No lacing to speak of either. The aroma is green apples for the most part with a hint of malt. The taste is on the light side actually for the apple taste with more ale for the finish. Also tasted a bit 'soapy' for some reason. Light-bodied with good carbonation. Overall, not really pleased with this one. I would rate it a '5.5 to a'6'.

A-Clear as day light light yellow in the glass, no carbonation or head.

S-Crisp green apples and not much else.

T-Taste is a light green apple flavor but not much else. No wheat, grass, just a pleasant apple flavor.

M-Light, kinda watery, not much carbonation.

O-As it warms it doesn't taste as good but it is better than few reviews indicate. It isn't anything special but it is acceptable. The apple is natural so it avoids the artificial fruit flavor.

Wasatch Apple-A-Day from Utah Brewers Cooperative
Beer rating: 76 out of 100 with 26 ratings