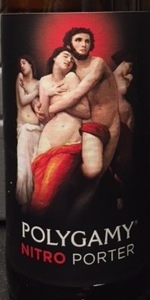 Rated by MadMadMike from Florida

Pours a very dark brown with a head of foam that you expect from a Nitro.

I get chocolate, roasted malt in the smell, as well as some notes of tartness?? That can't be right.

Chocolate and roasted malt taste but it has some fruitiness that does seem to add a light tartness and I don't welcome that.

Creamy mouthfeel, no surprise there, I feel something has gone wrong with whatever batch this is. Tartness is not wanted. I keep drinking and that tartness doesn't go away. Damn it.

4.01/5  rDev +7.5%
look: 4 | smell: 3.5 | taste: 4 | feel: 4.75 | overall: 4.25
Pours very smooth, initially only about an 1/8 inch head that slowly grows to about 1/4 inch of very fine, light bubbles that persists throughout the entirety of the drink. Adds a creamy, richer texture to the beer when in your mouth. However, the feel of the beer itself is not nearly as rich in texture or flavor. Very subtle aroma and taste of chocolate, and toffee, with a bit of nuttiness. It isn’t very rich, but it also isn’t highly refreshing either, it’s somewhere in the middle, and that’s just fine by me. Overall, it’s a great beer to relax with a the end of the night, pretty slow sipping, and easy drinking for almost anyone.
Jul 24, 2021

Reviewed by CalebSipeMN from Minnesota

Aroma: Mild aromas, but of rich chocolate, dark chocolate, some espresso roast with some light dark fruit and malts underneath. (3.50)

Flavor: The flavor follows with more rich chocolate, cream, espresso roast, and dark fruit. The flavor is actually quite complex, but it's short-lasted and fades quickly. (3.75)

Feel: Lighter bodied. Soft. Lower carbonation. Actually drinks quite flat. For a nitro, I didn't detect really any nitro in here and found the Founders Porter far more creamy and with a better body. (3.25)

Compared to Founders' Porter 4/4/21: Pours a similar color with but a much milder and lighter color head. Milder aromas and flavors. Leans to have more dark fruits, but overall less of everything. Even less creamy, despite being a nitro.

Overall: This beer had some redeeming attributes. Hard to review when compared to Founders Porter, so I suppose this one may have been decent in it's own light. However, I was underwhelmed with this beer. I found it to have mild aromas. The flavors were nice and complex of rich cholate, cream, espresso roast, with a dark fruit character. Complex, but the body was lacking and so the flavor didn't hold around long. The mouthfeel was flat and I don't think the nitro provided much here, even straight out of the can. Clean and drinkable, but flat and short-sighted. Decent, but probably wouldn't seek out. (Final Rating: 3.58)

Reviewed by Limazulu from Idaho

The beer pours a blackish brown color with excellent head retention and considerable lacing. Alas, this was to be as good as things would get. On the nose I pick up a burnt toast and coffee aroma, with a hint of vinegar. It's not bad, what there is of it. The flavor profile replicates the nose, but the body and mouthfeel are very thin, and there's not a lot of flavor. Alcohol is well integrated into the flavor profile I guess; it's barely discernable, which I guess is a good thing.

Mehhh... There are worse beers for sure, but this is pretty unimpressive. One and done.

I really like this drink though it doesn't make me feel like I'm "drinking". It has a mild dark chocolate / bitter coffee and VERY mild creamy feel to it but, I really do like it. I bought a sixer of cans a few weeks ago and the past few days I was craving it again so I bought another sixer because it was on sale for $6.99 (previously $8.99) and was very pleasant and happy with the purchase.

I think there's better beers out there for a nine dollar price tag but, this one's worth trying at least once if not twice. I'll definitely grad another sixer in the future if it's in the $7 range but, nothing more. It's a nice beer with a difference beer but, not worth much more than a dollar+cents a can.

S: caramel and chocolate, with some lovely bready notes.

T: bready with tons of caramel, milk chocolate, and grain.

O: overall, good enough to share with the wives.

Reviewed by HoodviewBrew from Texas

Nice charred grain / woodiness and caramel. Coffee notes and a bit of chocolate as well.

Slight hop bite up front - very light. Goes right into heavy roasted grains, coffee, and some Chocolate. Starts of pretty sweet but seems to get a bit drier.

Feels pretty thin for a porter. Could be a lot Fuller. I'd say it's a lower end of medium.

This is a pretty good beer. Not so fond of the nitro in this one. Needs to be Fuller on the chocolate/coffee roastey flavors.

Reviewed by moonman1994 from Wisconsin

4.86/5  rDev +30.3%
look: 4.5 | smell: 4.75 | taste: 5 | feel: 5 | overall: 4.75
Perfectly chocolatey and really smooth. A solid porter that is flavorful and refreshing while not feeling at all heavy. Much better than the standard Polygamy Porter or the Barrel Aged Polygamy Porter in my opinion. Personally one of my favorite porters but I like them on the chocolatey/coffee flavor side.
Dec 09, 2018
Rated: 3.78 by chossboss from Oregon

Reviewed by lordofthewiens from New Mexico