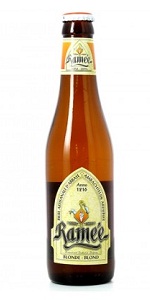 Notes:
View: Beers
Reviews: 17 | Ratings: 38 | Log in to view all ratings and sort
Reviews by IchLiebeBier:

Remarks: Did not score A, T, S, M at that time; disregard those scores

Good golden colour, with a beautiful head, creamy and compact.
There is a fountain of thinbubbles rising from the centre of the glass.
Fresh smell, of fresh flowers, white fruit, peach. Lightly spiced. And notes of hop.
At the taste: a good bitter taste, sweet of malt. Freshness, dry flowers. Good.
Medium body, some alcoholic in the aftertaste, bitter, and pleasant. Good beer.

A winsome and nebulous lemon gold color on the pour with a modest head that is white in color, frothy in consistency but it dissipates much too quickly, leaving a fine thin sheet to almost cover the glass. Malt is the dominant aroma, hints of yeast, and a bit musty but still pleasing enough to this old schnozzle. Ambrosial start that is nicely malted, top is skimpy in feel, the finish stingingly acidic, delightful in its hop spicy bite with a slightly bitter and long lasting aftertaste, quite drinkable, not great but a satisfying drink nonetheless.

I picked up a bottle of this in Antwerp Belgium at a fast food take out restaurant after hitting up the Kulminator. I was a bit too drunk to drink it right there so it made a good souvenir to bring back home and taste.

This beer poured a golden yellow body with a big fluffy white head.

The nose was a nice mix of wheat, fruit, banana, spice and a touch of that classic subtle Belgian farmhouse scent.

The beer was medium to full bodied with a huge spice bite. Rather bitter and dry. Creamy and very smooth from start to finish. A nice tart fruitiness flows with a the big yeasty phenolic malt touch. Soft herb and a heft spice compliment the big fruity malt taste.

Simply a classic belgian blonde. Nothing to go crazy over, but still, a damn fine beer that I wouldnt hesitate having again.

pretty good beer. Poured with large foamy frothy off white head that settled down to a thin cover wiht some lace. color is a slightly hazy amber. Aroma is a belgian golden ale - malty, candy sugar, yeast, hops. Flavor brings out some sweetness & bitterness with some piquancy in the back. great body and carbonation. Very good finish. Super easy drinking beer. pick up a little alcohol warming at the end too. Dangerous session beer. too easy to take a big swallow. Really like it.

This beer is golden and hazy in appearance. A rather hard pour produced a huge pillowy head that faded into a nice ring of foam rather quickly.

The smell is fruity, spicy with some floral notes and almonds. There's also an aithentic stable-like aroma traceable.
the taste is malty and floral with some 'smoky' aspects and a nice spicy hop bite. Some honey and nuts near the end & a slightly bitter finish. The mouthfeel is very good: good carbonation and a medium body. The drinkabillity is good as well.

This is a nice Belgian blonde. Not the best beer available in the style but a classic example and a very solid brew overall. Recommended!

Beer poured a clear, bright golden color with a thick head that lasted for about a minute and ran quickly. The nose had some solid citrus and earthy qualities. The taste was also citrus, pineapple and a bit of grapefruit. The taste had a nice balance of sweetness and a touch of bitterness on the back end. Easy drinking beer.

A great tripel from Brasserie De Brunehaut. Poured on a Duvel-like glass for a "full-headed" visual. Pale yellow, a little hazy (but not as much as a witbier). Medium-sized fluffy head, leaving a small lacing effect.
Aromas are complex, going from beer ingredients such as yeast and malt to fruits and some spices (mainly pepper) in the end. Can't smell any presence of alcohol.
Now for the taste. For me, this is where this beer shines. Sweet tastes of wheat malt combined with refreshing citrus fruits. Really interesting. A little bitterness in the end, making me feel like having another quick sip...
The intense carbonation makes this beer full and intense, with a greatly refreshing mouthfeel. A little acidic on finish, making me feel this beer has a lower pH than other tripels (du konink and karmeliet come to mind).
Overall a very good example of the belgian style. I wouldn't hesitate on having another one.

The head started its way out of the well-chilled bottle upon opening. Poured a slightly cloudy honey-golden-yellow, with a huge foamy sturdy head despite pouring down the side of the glass.

The smell has an interesting scent, some unusual possibly herb-scent that I can't quite identify.

Taste-- less than I'd expected after seeing how it had poured and checking the smell. A bit flat-tasting and not much that excites me. It's not bad, but just not up to what I had expected.

Mouthfeel-- after drinking each sip or gulp, there's a bit of a tinny alum-taste, so to speak. It's not overly so, but you get the idea-- not what I would prefer in an aftertaste-mouthfeel.

Drinkability-- at 8 percent and given the overall experience, if this is all they were serving, sure I could make a night of it. I'd probably prefer other Belgian's or various beer in this category, however. I still gave it a 3.0 on drinkability, so I'm not totally knocking this stuff.

Keep in mind, however, that I'm drinking this from a bottle. After I opened it and the head began to emerge, I licked it off-- and found a very tinny metallic taste. Possibly (hopefully!) my experience was less favorable than I would have had, on-tap or maybe a different bottle.

Has quite a bit of delicious hop aroma in the nose combined with a backing sweetness that reminds me of Triple Karmeliet, maybe some wheat in the malt bill? One of the most interesting smelling Belgians I've ever encountered.

Taste is similar yet not nearly as strong, though appealing. Some lemon coming through which seems related to the hops (styrian goldings?). Very drinkable, but I'm a fool for this style in general. Body got a little flat as it warmed, but some more hops came out of hiding, reminding me a bit of Poperings Hommel Bier. There are not many Belgians with more hop character than this brew. My bottle states 7.5% abv not the 8.0% listed here. If it were available in the U.S. I would 'check back on it' fairly often.

Very tasty burps, as to be expected I suspect from the great hoppy aroma.

I tried this beer at some little cafe right on the Grand Place in Brussels. My first belgian beer in Belgium. Never heard of it before, but I was quite impressed.

Pours a light golden color with a clear, filtered look to it. There's an appearance of light carbonation. A small head and little head retention with trace amounts of lacing. Overall it looks very appealing.

The smell is very yeasty. Lots of fruity aromas. Little to no hop aromas.

As the smell indicates, the carbonation as the beer touches your tongue is very mild. There is a lingering hop bitterness in the back of the tongue, which I found to be quite unexpected, although enjoyable, for a blonde, but the overall flavor is swirlign with sweetness.

Upon further inspection, the beer opens up to flavors more along the hefeweizen and saison styles than most blondes I've had. The overall sweet, fruitiness of the beer brings the taste of peaches to mind, and it exhibits a very intriguing spicy characteristic, with notes of nutmeg and coriander (which I learned on this trip was initially used to help prevent hangovers).

These fruit and spice flavors were unexpected, but turned what I thought would be just a decent beer into a highly enjoyable one. Overall, I'd say the Ramee Blonde was a very drinkable beer, and I'd be happy to have another one.

There is something uniquelly Belgian about this style of beer and when you haven't had one for a while the small and taste takes your breath away.

This version is as good as any, full of those Belgian yeast esters and hop flavours others can only hope to achieve. The beer is crisp, tangy and full of life, the 7.5% ABV sits nicely and only comes to the fore in the aftertaste as the mouth dries.

A good example of this wonderful Belgian style of beer.

Poured into a tulip from a 33cL bottle that I got at a Delhaize grocery store, of all places.

The first thing I noticed was that it's filtered; not really used to seeing that in a Belgian Tripel. It does look good though; a clean, clear gool with a huge head and a lot of bubbling. The head is very persistent and leaves good lacing.

Smell is typical tripel, with fruity/sweet esters and light hoppiness hitting at the same time.

The first sip brings a sweet sensation, but not overpoweringly so. Light fruits back it up. A fair amount of carbonation. No hops at first, but they make their presence known after sitting on the tongue for a few seconds.

Mouthfeel is a bit on the watery side compared to its Tripel brethren, but not terribly. This, along with the fairly high carbonation, are all that really hinder it's drinkability.

Overall a good solid beer, but probably not one I'll really try and seek out.

Overll: a drinkable beer. not the best. Smell is best part of this beer.

A yellow gold beer that is just short of clear. A thin head doesn't cover much and dissipates to a spiderweb island of suds in the middle of the glass.

Smell is of apricot and apples. It's fruity notes are subtle but it is definitely the dominating factor of the nose.

Taste is apricot jam thinly spread on top warmed light sweet bread. A thin collection of flavors that works well with a peppery spice and bitterness.