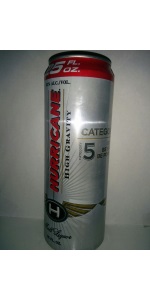 Overall: Classic cheap malt liquor. Not outright disgusting (at least when cold), but extremely boring so you can chug a tallboy.

It is foamy but very pale. It straw and the head dissapears quickly. It smells metallic. The taste isn't strong but is sweet with a bad aftertaste. The feel is light and not bubbly enuf but bubbly. overall, good hurricane prerp.

Back in college, my friend and I would call this beer "hobo drink." Simply because a homeless man squatting at the Sunoco across the street from our dorm recommended it to us one fine evening. In the homeless man's own words: It's a cheap'n but it'll sure as hell get the job done. And it sure does. The beer has a smooth, full body, flavor which is nice considering all the other cheap beers' flavors taste unbearable. Smells disgusting and hints toward being something quite poisonous which it should in my opinion. No need to pretend like it ain't poison going into your body. It looks like any other lager though, and I like drinking it out of a glass since the sight of the can depresses the hell out of me. I only recommend the beer to people as a way to appease my morbid sense of humor. If I drink it, I drink it alone and in the dark. Regardless, I've had worse tasting beer that cost way more than Hurricane Category 5. So, if you're looking for a cheap buzz that's shameful and degrading, yet full of charm and character, why not buy a pack of four?

Considering I paid less than $3 for 4, 16oz tall boys at over 8% alcohol by volume, it ain't half bad. Sure, its no black and tan hand drawn from the Guinness/ Bass Ale taps, but served in a cold glass on a hot day, it's a damn refreshing lager. But don't tell anyone, they'll raise the price. I'd rather drink this swill than a bud light or miller light anyday. At least it is a real full bodied, full flavor, full alcohol, full calorie beer. It's kind of like riding a honda or fucking a fat chick, it will get you where you want to be, but it's better your friends didn't know. It is indeed bottom shelf, and that is exactly where I found this little 4 pack of even though its the day before payday my ass is getting drunk tonight. In high school my french teacher told us that American beer is just an excuse to get drunk, and this exemplifies that remark. Thank you Madame Smith.

this is like the prole prostitute in 1984 - it's way worse once you get it home.

it didn't look too bad in the store, even for the ridiculously low price. once i got it home and cracked the can into a glass, it's not horrid - yellow topaz with soapy lacing. mild activity in the glass.

but then you find out the whore has no teeth. man, this is not the high class shit i'm used to. smell is musty like an old sponge. taste is bubble gum, cereal, and sweetness. mouth is fine. overall, not as bad as some folks below have made it out to be, but not something you should consider buying, even at the $3.99 price point for 4 tall boys.

i'm not really sure i can finish 4 of these and i can't give them to anyone else.

this is my go-to cheap get drunk without going broke beer. at 3.40 a 4 pack I will buy it over the other cheap beers if available. it is like most cheap beer taste better when it is cold. I am indiffrent about the smell of this beer.

by far thugh this is my faverate ghettho beer. at 8.1% alcohal per volume it is a good price. the look is so and so, I would prefer if amasher bush did not use artaficial cancer-casuing colorings in the beer to simply increase its look, as the majority of those who buy cheap beer drink it stight from the can and will probaly never see it unless you spill it.

Bright straw gold with sharp clarity, racing streams of carbonation. A finger of foam initially, then a thin unbroken skim after the first sip. No lace.

Taste is bland, feels watery and lightly astringent. Slight apple, wet cereal grain, corn.
It's not overcarbonated, surprisingly. Kind of mellow and numbing from the alcohol which is somewhat noticeable. Overall it's not awful, but nothing special for a malt liquor. Even regular grade Hurricane is better (which I'm not convinced this isn't just a repackaging of).

Color and clarity are fine. They look about like any other American Pale Lager or Adjunct Lager. Head is white, even, thin, and soon gone. Aroma favors "liquor"/alcohol and esters over "malt", and may be influenced by adjunct (corn I presume). Hops are non-existent or maybe masked in this brew. Perhaps the faintest presence in the aftertaste. Alcoholic sweetness carries the day. Feel is pretty standard and benign. Fairly smooth and crisp, decent carbonation, warming. I wouldn't recommend drinking more than one of these in a sitting, and that has nothing to do with its high ABV. It's just too sweet and lacking in beer character that I've come to expect from even the most basic adjunct lagers. 16 ounces was a struggle. I can only imagine what 25 would be like. I had a headache before halfway through, and I suspect the sugar more than I do the alcohol.

Appearance: Clear deep golden in color, with a robust, coarse white head, which slowly collapses to a ring of foam about the glass wall, and a largely unbroken thin sheet across the surface. The lacing is elegant and resembles abstract art. Abundant minute bubbles drift lazily upward.

Aroma: Sweet alcohol is out front in the aroma, although it isn't harsh at all. Cooked vegetables are evident in the aroma as well, along with some metallic hops.

Drinkability/notes: Its malt liquor, its cheap, and its readily available. That's about all there is to say. My fiancee, who appreciates craft beer, said its like "an empty canvas". Brevity is the soul of wit.

Presentation: Packaged in a twenty-five ounce aluminum can (with the "extra" ounce), served in a New Belgium Brewing chalice.

Hurricane Category 5 Malt Liquor from Anheuser-Busch
Beer rating: 63 out of 100 with 25 ratings