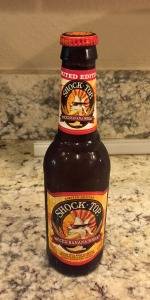 Got a single bottle of this in one of Safeway's mix and match sixers. Glad I didn't get more of this.

Taste: Nearly nothing. Some note of banana, very light wheat, no hops. Juice a banana, mix that with a Budweiser, and essentially this is what you get.

Feel: So thin as to be insubstantial. Watery and bland.

Overall: Do not waste your palate or your money.

Very opaque amber, with small amount of some sort of chunks clinging to one side of glass. Large, but quickly dissipating lemon-white (banana-white?) head. In bottle, smells not like rotting banana, but like fake banana and just general rot. That said, I'm not even complaining, just describing. In glass, something familiar and strange, but I'm not sure if I'd call it unpleasant. Can't quite figure it out, unfortunately. Some specific big name candy perhaps? I still don't think that's right. Could be influenced by the spices in it as well, but still I hesitate. Oh well. Vaguely reminiscent of bananas and candy is what I'll put down for aroma. And the taste is more of the same. Except now I amy be onto something. Reminds me more of a number of pumpkin (spice) ales I've had than anything much to do with bananas, only far less intense, and perhaps more tart. And yet, the banana, whether real or fake, can not be denied, and at least there's not really a rot component. Over-ripe maybe, but not outright rot. Medium feel, sudsy, and smooth. Flavor oddity aside, I'm actually not inclined to call this just another try-hard beer. Definitely not my favorite, and yet it has grown on me.

Being a porter and stout fan, I was pleasantly surprised by how much I like this. Took a swig out of the bottle, then had to run and get a glass so I could more fully enjoy the sweet, round, slightly spicy scent. Not outright banana, just enough softly sweet notes to nicely juxtapose the beery tang. A pretty autumn orange, too.

If taken for what it really is and not considering the brand, this isn't that bad of a fruit beer. Pretty close to what you get from Well's Banana Bread Beer.

It smells pretty good. Not super sweet or anything, but a nice tame banana bread smell.

Spiced Banana Wheat Shock Top tastes like a cheap beer trying to be a interesting. It's not bad, but it isn't great. It still tastes like beer, but the banana is definitely not subtle.

I wouldn't buy it again, but I don't regret trying it. I'll probably just let my girlfriend have the rest.

I've had this a few times before but now it's time for an official pour-n-review.

A : The color is darker than I remember, somewhat of a dirty orange glow (90% opaque) with a massive head on top. The head eventually reveals itself to be a bit of a masquerade, giving out within a minute's time to a small, creamy ring. The lace is non-existent. Still a pretty beer.

S : Lots of candy-sweet aromas, much like candy corn and gummi worm. A bit of that spiced banana runt going on, with some Certs, and some very spicy clove. Roasted malts and wheat can be faintly nosed. This beer's aroma is extremely candy-like and very saccharine but I honestly could smell this all day.

T : Thankfully the beer isn't as sweet as it's nose would dictate. It's mostly got that Belgian White flavor going with a bit of cinnamon and banana. Some slight sweetness accompanies the flavor but not enough to turn it into a trendy malt liquor. A bit of clove on the finish. It's obvious they've built on the Belgian White instead of incorporating a new recipe altogether. I don't mind either way - just an observation.

F : This is where the beer falls flat (figuratively and literally). A very watery, light mouthfeel with some slight creaminess accompanied by lively carbonation. The feel is very underwhelming. The dryness it tries to emulate ends up being pasty in the end.

O : Wow, I really thought I enjoyed this beer more than I realized. Now that I've sat down to analyze it, I'm noticing the blatant flaws. This is a beer you don't really give much thought to - you drink it and don't think about it...it's much more enjoyable that way. Not for the connoisseur, but more for the beer lover.

Pours nice/bubbles for long time. Smell was pretty good small hint of banana. Wasn't the best feel. Sort of fell flat with carbonation. I did not really taste much banana at all here. I don't want it too sweet but at the same time this didn't have any hint of sweet banana in the flavor at all. Probably wouldn't buy this if it wasn't in the variety pack I bought.

A: Pours a dark orange with a bright white head, very hazy, lots of stuff floating in it, looks very unappealing, no head retention.

A: Intense, artificial sugar aroma, caramel, not much else, no alcohol.

O: Very sweet, too sweet for me, didn't get any spice, drain pour.

Poured into a nonic pint...rich golden color with rich head; aroma was nice--like banana bread and not artificial; banana taste was, again, more like banana bread vs. artificially flavored candies; also a bit of citrus and biscuit with the wheat evident. Minimal carbonation and good mouthfeel...more of a dessert beer, but not overpowering, but also not a session beer. Worth a try for something different but not really an everyday go-to beer for me.

Thanks Nick for this one!
Dark orange, murky with a thin frothy ring around the edges.
Smells artificial, butterscotch and banana candy.
Taste is sweet, overripe banana, candyish.
Not good, definitely artificially flavored.

A- First thing you notice when pouring this beer is the vibrant color. The beer is a bright, almost almost artificial orange and even the head has an orange tint. The head is decent sized and hangs around a decent while. Lacing is also adequate.

S- The scent of the beer is surprisingly hard to describe. There is definitely a sweet banana component at first, and then it adds a creamy sweetness as well. Past that initial banana flavor in the smell, the sweetness really ramps up and some spices also kick in. It has a very slight resemblance to the taste of Runts candy bananas.

T- Starts of with the same banana and sweetness that the scent has. The flavor does resemble the Runts banana candy a little bit. After the initial sweetness, the flavor moves a little toward a spicy, clove flavor. A touch of bitter malt with a hint of pepper spice ends the drinks.

M- Smooth and high carbonated, like most wheat ales. It drinks pretty easily as well.

Overall, this is an interesting, and not entirely disgusting, flavored beer. The flavor is different, but after the initial banana flavor, it kind of tastes like a normal Shock Top. I don't love it, but I don't hate it.

Aroma is the best thing and it's extract. Appearance is a sickly, gray tinged, hazy apricot with a bit of head. Flavor is putrid mix of banana, butterscotch, apricot, salt. Body's ok. Can't drink anymore and dumping it.

This was really a surprising beer to me. Many times these fruit/veggie types are mostly sweet with no taste of hops or malts - but this particular brew has a great mix of both. A strong scent of citrus and banana to go with a thick feel that's crisp. I wasn't too impressed with how it pours little to no head, no lacing, and your standard wheat beer look. Again, I was surprised and impressed - this really is what I consider a good "dessert beer."

This beer is like the answer to a question that nobody asked. Just why? I have had banana flavored beers, but how far are they going to stretch the Shock Top name? Trust me, I am a huge Shock Top fan, and love the Honeycrisp Apple and the Lemon Wheat versions as well; but this one is pointless. This one is one of the least pleasant banana flavored beers I have had. Mainly because it tastes fake. There is nothing natural about this, it tastes like a wheat beer with artificial banana flavored syrup poured in.

Hits you with an extreme amount of flavored vanilla extract and cloves, then the disgusting rush of artificial banana flavor hits you and washes away with a stomach full of regret.

Get past the idea that you are about to drink a banana beer and this beer is great. I was very surprised how much I like it. It was my favorite out of the 4 beer sampler pack.

Another poor example from A-B on how NOT to brew "craft" beer. Good wheat beers don't need additional help to be somewhat spicy or have banana characteristics.

I love bananas so I thought I'd give this a try, even though it's an AB product. On the initial pour, the smell was great. After that ... it was all downhill. There is nothing natural about this beer at all. I should have known better!

Everything about this beer tasted fake. It looked just like any other Shock Top - cloudy, golden yellow with a white head. The aroma is just banana - but fake. Like cheap baby food banana. Tasted just as bad as it smelled.

I get the smell of wheat and bananas though their aromas are anything but assertive.

The taste is a tad better. The banana takes on an accompaniment of bread which almost brings banana bread to mind.

Not a horrible experience drinking this but having it again is doubtful.

Draft. The seasonal Shock Top offering, seemed a bit unusual but had to give it a try.
Slightly hazy, orange color with a bubbly head. Foam quickly settles to a floating film, thin strings of lace.
Smell is of wheat and some yeast, but lots of artificial banana aromas.
Taste is much the same, some caramel, and banana flavors on the finish. Some mild spice gives a hint of bitterness, but not really enough to cut the cloying sweetness.
Not overly carbonated, with a slightly crisp mouthfeel.
Couldn't get past the sugary and artificial bananas, pretty gimmicky to me.

On tap at Brew At The Zoo held at the Los Angles Zoo in Los Angeles, CA.

Pours a hazy orange with a foamy beige head that settles to a partial film on top of the beer. Foamy swaths of lace form around the glass on the drink down. Smell is of wheat, grain, caramel, spice, and artificial banana aromas. Taste is much the same with grain, caramel, and artificial banana flavors on the finish. There is a mild amount of spice bitterness on the palate with each sip. This beer has a lower level of carbonation with a slightly crisp mouthfeel. Overall, this is a pretty poor beer with fake banana characteristics all around.

Shock Top Spiced Banana Wheat from Anheuser-Busch
Beer rating: 73 out of 100 with 106 ratings