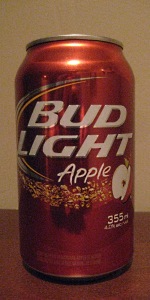 Reviewed by LocalBeerGuy from Canada (SK)

1.53/5  rDev -42%
look: 2 | smell: 1.5 | taste: 1.5 | feel: 1.5 | overall: 1.5
Can: Poured a light golden color lager with a medium foamy head with limited retention and no lacing. Aroma of fake apple notes with some adjunct notes also perceptible. Taste is also a mix of sweet adjunct notes with apple syrupy notes and bland aftertaste. Body is about average with good level of carbonation. Closer to Breezer then actual beer.
Jul 16, 2019

This beverage pours a brilliant golden color. It is topped with an inch of fleeting white head that leaves no lacing.

The smell is sweet apple all day long. I get a biscuit aroma after a bit. It kind of smells like an apple dumpling.

The taste is sweet apple up front. The finish is somewhat dry.

It is not as sweet as Redd's. It reminds me of a cider more than a beer.

Reviewed by Rock_Glenn from New York

Rated by TLogan from Ohio

Tastes... like apple juice. Not like a well-made hard cider, nor like an unnecessarily sweet American hard cider, but also not like beer. Just like a very, very light beer with some mild apple flavoring added, and my cider pallet isn't developed enough for me to say whether it's natural or artificial.

It's not bad, really. Unlike Redd's Apple Ale, this doesn't have a horrendous aroma that weighs down an otherwise drinkable alcopop. I will never understand where BA draws the line between malternative and beer, and if this counts as beer I think Zima probably should as well, but for what it is it's really surprisingly okay.

Reviewed by Danny_Brewstein from Georgia

Reviewed by Zach136 from Georgia

Clear piss water appearance, smells like green apple and cotton cigarette filters. Actually doesn't taste that bad as a drier cider alternative. But the finish is almost as bad as the aroma.

On a week long work trip to Canada, I found a tall boy of this in one of the convenience stores sitting right over the border through Detroit. Honestly didn't even know this stuff exists so I figured fuck it, let's give it a shot.

Look - Pours a typical see through golden with a frothy white head that brims to the top and overflows a bit on the pint glass. Carbonation appears to be about moderate and there is no lacing left to mention.

Smell - Initially hit by the usual adjunctyness that regular Bud Light is known for with a moderate grain bill and just a touch of apple peel. I usually pick up apple peel in some adjuncts anyway so..

Taste - The apple becomes more pronounced here though it is met oddly by the malt and makes it a bit weird tasting. Like imagine taking cardboard and wrapping it around an apple and taking a bite.

Feel - Body is sweet, watery and chock full of carbonation though not cloyingly sweet and easily drinkable.

Overall - It was easy drinking and didn't have much flavor to mention, like the original. Not too bad, But nothing worth going out of the way for as expected.

Reviewed by jcubz from Canada (SK)

So the look of it. Yellow golden color. No head at all. Medium carbonation.

The smell of it: Apple. Very strong on the nose.Sweetness, and sour. Smell good tho.

The taste of it: Apple sour. This is completely different from the smell. Its just the corn and the apple doesn't mix well and the finish it's just a bad sour.

So overall would I recommend it ? Absolutely not ! Last time that I am drinking it ....

Reviewed by Borbly from Canada ()

3.26/5  rDev +23.5%
look: 3.5 | smell: 3 | taste: 3.5 | feel: 3.25 | overall: 3
A: Considering it's a Bud Light Base, this at least looks like beer. Surprisingly thick, foamy head and straw-golden colouring.
S: Almost entirely cider. Would be excellent if this were a true cider, however, that is not the case.
T: Cider up front, then a lightly beery aftertaste on the end.
F: Enjoyable, carbonation is well balanced and aftertaste not too strong.
O: Might as well be Bud Light with apple juice mixed in. Was hoping for something a little more interesting from the combination of the two. That being said, it is still enjoyable, and a possible buy-again for me should I ever feel like indulging in a cider with less sweetness.

Reviewed by Svingjo from Canada (BC)

2.85/5  rDev +8%
look: 3.75 | smell: 2.5 | taste: 3 | feel: 2.75 | overall: 2.75
Pours a crystal clear straw colour with a finger thick white head. The nose is apple juice, not even Apple cider but apple juice. There is almost a chemically concentrated sweet apple smell as I go to take a sip. Surprisingly it's not as sweet as I was expecting and I actually can taste some malt (crystal??) behind the apple. I don't think a hop has been within a kilometer of this though. The carbonation isn't overpowering like you usually get with this style of beverage. Recently I've had the opportunity to try both Madjack and Redd from the competition and this one toned down sweetness brings it forward. Still something about that chemical smell though.
May 23, 2015

Pours a bright golden-yellow colour - not unlike a glass of apple juice, although this beer is much more effervescent than that. At the surface, one finger of bone-white head is generated, proceeding to fizzle away over the next sixty seconds or so. A modest collar survives, but that's it. The aroma is overwhelmingly dominated by tart Granny Smith apples... smells like a Somersby crossed with a green Jolly Rancher.

This one pretty much tastes the same way it smells - green Jolly Rancher sweetness and Granny Smith apple tartness are the only facets of any real significance. It finishes with that dull, grainy corn husk flavour that is featured in most Bud Light products; just enough to convince me that I am drinking a beer, and not a mere malt beverage. Leaves a weird, green apple flavour behind on the palate; if it finished more cleanly (like a typical light beer) I'd be inclined to bump the score a little. Light-bodied; the carbonation is lively and fizzy, giving this beer a crisp, mostly refreshing mouthfeel.

Final Grade: 2.88, a C grade. Bud Light Apple delivers on all of its promises - that is to say, it's a light beer with apple flavouring, I guess. While I doubt I'll ever purchase this again, I will bestow upon it some faint praise by saying that I'd probably take this over regular Bud Light, as well as over Molson's Mad Jack Apple Lager - which is the closest competitor I can think of for this also-unnecessary product. The question for me remains the same - why would I want to drink any of these pseudo-beers when I could just go get some cider instead?

This beer pours a clear, pale golden straw colour, with two fingers of puffy, loosely foamy, and bubbly bone-white head, which leaves a few minor instances of sea plume lace around the glass as it quickly blows off.

It smells of reduced, yet sharp apple juice, a subtle pale graininess, a hint of nail polish remover, and faint earthy, untethered bitter notes. The taste is again dominated by the almost real boy seeming pressed apple fruitiness, with a still wan and gritty, um, sweetness, I guess, as this is Bud Light, after all, and a soft, cheap perfumed floral bitterness.

The carbonation is rather involved in its airy, mouth-expanding frothiness, the body on the light side, duh, that convincing fruity essence not really aiding and/or abetting here, but it's smooth enough. It finishes mostly sweet, the mushy apple persisting, because, well, there's much more of it than anything else in this offering.

Well, if Molson/Coors runs off of a cliff, then you can be certain that A-B/Inbev will only be a few aping steps behind. That said, I think I like this more than Mad Jack, which was more like a crappy cider, where Bud Light Apple is all apple, pretty much all the time, like you still tried to eat that slice of Wonderbread after having soaked it in Sun-Rype.