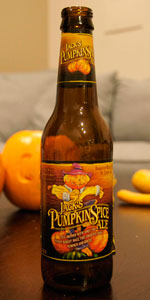 Ah the ol' Jack's series of beers. They always used to show up at the shitty dive bar named Jack's. I wonder if this one is a fall season away from coming back as Shocktop Pumpkin or something similar. Anyways, golden pour, small white head that gets its ass beat and goes home. Aroma of pumpkin kind of.

The taste definitely drops those pumpkin, nutmeg and cinnamon feels on you. It definitely went for the pumpkin pie vibe. The mouth feel though makes it more challenging, instead of a lower amount of carbonation, this one goes to 11. Too spritzy, should have been significantly less in the carbonation department on this one. The pumpkin extract is probably the best thing about this beer. The base is underhopped and instead drops something excessively alpha acidicc, then the base of the beer is or might as well just be Bud Light wits excessive carbonation.

2009 backlog. 12 oz bottle. I’m comparing this to Blue Moon’s Harvest Pumpkin Ale, which I just drank. Here’s AB’s answer to that beer. Aroma is much better, more pumpkin pie-ish than Blue Moon’s. Appearance is much worse. It doesn’t have that nice amber hue that Blue Moon had. Also, very little head, and not as good lacing. Flavor is more like pumpkin pie, so it gets the upper hand there. Still a little watery. Overall, it surpasses Blue Moon’s, surprisingly. I wasn’t expecting that.

Remember as being very average