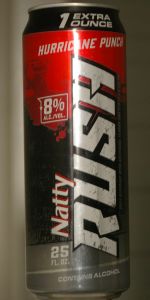 The first sip of Hurricane Punch is a gentle reminder of childhood nostalgia, the soothing taste of a half melted cherry Fla-Vor-Ice on a summer afternoon — until my taste buds come to their senses. What’s left is a lingering flavor; something not quite like beer, certainly not punch, at least 60% sugar with what might be a tinge of alcohol. The container assures me Hurricane Punch does in fact contain alcohol (and 1 extra ounce!) but it’s hard to tell. I add some Tito’s to be in the safe side. Truthfully, after a few swigs, my traumatized taste buds surrender and it’s off to the races.

Poured from a 25 OZ can into a pint glass. The appearance is a neon red color with a huge pink head. The aroma is sugary fruit punch. The taste follows the nose with some mild beer in the way back. This is a "gas station beer" and I judge it for this class of Beer. BA should consider it as a new style. Olde E, Hurricane & 4 Loco are it's competitors.

This is a grossly artificial taste. It pours with a head that quickly diminishes to nothing. The smell is artificial punch flavor, and the taste is artificial punch. There is no redeeming factor to this beer other than the alcohol content.. Perhaps on a hot summer day when one needs a thirst quenching alcohol beverage this might fill the need.

Natty Rush Hurricane Punch brewed by Anheuser-Busch, with an ABV of 8.00% This American Malt Liquor Pours out a Reddish / Pink color with a thin pink colored head. The head to this brew goes away fast. This brew has the look of fruit punch, not saying that is a bad thing. The smell is rich with fruit punch flavors, sugar, and alcohol. You can definitely pick up on the 8.00% ABV in this brew. Now for the taste, it is what to be expected. It is Sweet, Lots of sugars and fruit punch. Really reminds me of Gatorade more than a fruit punch. This brew is refreshing, if you enjoy fruit punch and lots of sweetness. There is nothing overpowering about this brew, it has a decent balance to it. The mouth feel is Bold, Sweet, Clean, Smooth and Refreshing. This brew would go nice on a hot summer day. Or drink it when you don't want a "Real" brew. Overall I am going to give Natty Rush Hurricane Punch a 3 out of 5. I would look this brew up again giving the opportunity to, but not something I would drink on the everyday. Once in awhile sure why not.

I am so confused as to when Beer Advocate started allowing ratings of flavored malt beverages (FMBs?) So much Beer Karma not earned from the 10+ years that I've been drinking this style. I swear that Four Lokos were never allowed to be reviewed here, and were even verboten.

I'm well aware of and a fan of A-B's Natural line. Natty Ice is outstanding. Natty Daddy is a solid entry in the high gravity malt liquor style. Natty Rush's entry as a competitor in the FMB category is welcomed due to Four Loko's willingness to roll over and die on top of neglecting the brand. Even better is Natty Rush's less-than-premium price point.

This can was purchased in the Big Sky Country of Libby, MT, and is from the Los Angeles brewery having been canned on the 291st day of 2017. This is my first encounter with Natty Rush, although I was aware it existed. Thanks to Town Pump for having this on sale.

Reviewed within the style of flavored malt beverage.

A: Poured into a 16 oz. glass. Color is an opaque bright red. Think Hawaiian Punch. Extremely thin and almost nonexistent ring on top. No head. Some lacing on the drink down but it disappears quickly. Appears to be still. Can't complain but no extra points here.

S: First thing that hits is a bright and sugary smell. Next is sour. Fruits follow with lime being prominent, and strawberry and pineapple are there too. Not boozy (although the 8% ABV probably helps) and only slightly medicinal. Definitely a win here for "punch" FMBs. Surprisingly inviting.

T: Oh, THERE is the harsh medicine flavor that I expected and which is present in all "punch" FMBs. Smell doesn't translate as the fruit flavors just meld into one. Sweet up front but changes quickly to a nasty bitterness that lingers. Think NyQuil here. Blah.

M: Less carbonation than I was hoping for. Medium to low-medium carbonation which doesn't help to scrub the flavor between drinks. Finishes tart and puckering and does not ask you to drink again. Slight warming on the drink down.

O: Fruit punch (or just punch) is ALWAYS the worst flavor when it comes to flavored malt beverages. Always has been, always will be. I'm amazed that brands continue to produce this variety. Natty Rush isn't nearly as bad as other FMBs punch flavors but is still to be avoided. Keep in mind that we're at 8.0% here, a full 1/3 less alcohol than the big boys at 12.0%.

I would love to see a "lime" version of Natty Rush that is flavored as A-B's Tilt "green" was. I would drink the Hell out of that!

Pours an eyebrow-raising pale red body with a pink head atop. Looks off-puttingly artificial, but it's true to its name in the sense that it looks like punch. Or rather like I'd sooner be punched in the nuts than take my first sip...

Smells of Hawaiian punch, cloying sugary sweetness, and sticky artificial fruit syrup. Pungent and rank. Lacks any yeasty, hoppy, malty, or alcoholic aromatics, which is all to say it just doesn't smell like a beer at all. Ugh...

Has a sticky mouthfeel paired with a saccharine artificial fruit-emphatic flavour, making it more an alcopop-redolent beverage than an actual beer - the kind of disgusting filth you'd lift out of a 7-11 while ditching class in middle school. And I feel like a middle schooler drinking it in the sense that I'm at high risk of vomiting at any moment.

Credit where it's due: its ABV is decently concealed. Tastes like carbonated Hawaiian punch. And it's not medicinal, which is a plus. I've had worse, and there aren't any off-flavours, but it's rather sweet to the point of obvious imbalance.

It's not undrinkable (though it's close), but it's just not beer-like in any respect. Leave this swill to the teenyboppers.

Sidebar: what does "Hurricane Punch" even mean?

Appearance: Deep, glowing red in color, like a Hollywood special effect. Fat bubbles cling to the glass walls. The head is a dusting of pink foam on the surface, while fine, broken rings of lacing adorn the glass walls.

Taste: Full-on Hawaiian Punch, with booze. If you want to know what I mean, its like Hawaiian Punch with vodka, The alcohol, at 8%, surely punches through with both taste and warming notes. Finishes with a lingering, sweet cherry, orange, pineapple, and alcohol flavor.

Drinkability/notes: Somehow I think that this an homage to childhood, now that we are all grown-up, we can have our Hawaiian Punch with alcohol. Not bad, for the price.

Presentation: Packaged in a twenty-five ounce aluminum can, served in a standard Pilsener glass.

I was in a Rush earlier to make my #WatermelonWednesday entry & having CANmitted to nonsense, I decided to follow up with this gem as a part of The CANQuest (tm).

From the CAN: "Malt Beverage with Artificial Flavor and Certified Color"; "1 Extra Ounce".

Y'know, I am coming to realize that unlike Hedwig & his angry inch, it is the extra ounce that really turns this into a party. I Crack!ed this 25-fl. oz. bad boy open & attempted an inverted Glug since I had a large glass in standby. I sat in rapt fascination as this Glugged forth since it was not only the color of red Hawai'ian Punch, but it actually formed two fingers of dense, deep-pink/light-red head that evinced good retention! Color was Imperial to Spanish Red, not quite as bright as Scarlet (SRM = N/A). I just had to laugh. It was gorgeous, if you have a fondness for fruit punch. I have been subbing in this week as a Kindergarten teacher & this brought back memories of punch & cookies in the afternoon at Story Time! Nose was super sweet, again very evocative of fruit punch. Mouthfeel was medium, which was kind of big & unexpected for the style. The taste was actually not as sweet as the nose had led me to expect, but it was still like fruit punch. I just found myself amused by this whole CANcept. Finish was semi-sweet, not as totally over-the-top sweet as I had girded myself against. Having subjected myself to so many really bad Minhas variations on this CANcept, this was actually not too bad. I could see myself in the back alley with some of my neighbors in the summer, drinking CAN of this from paper bags. YMMV.

Natty Rush Hurricane Punch from Anheuser-Busch
Beer rating: 65 out of 100 with 15 ratings