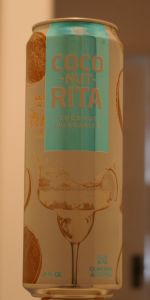 Great for a summer hot days. This drink is blended just right with no bitter after taste. You could smell and taste the coconuts after you open the beer. Just like the others with the exception of mango that don't mix with beer that leaves a bitter taste in your mouth. From the start to the end it's even can't complain no more about it. I just like it compare with lime strawberry and blueberries/raspberry drink.

Bud Light Lime Coco-Nut-Rita brewed by Anheuser-Busch, with an ABV of 8.00% This American Malt Like to pours from a 24oz can into a pint beer glass. The color of this so called brew is hazy whitish color. Kinda reminds me of the color of Squirt or 50/50. There was a slight small white head, the head goes away fast , no lacing to this brew to speak of. The smell is rich with sweetness an alcohol. Kinda reminds me of cheap bottom shelf coconut rum. No beer notes, just coconut an alcohol. Now for the taste, it is sweet real sweet. It like a mix of lemon lime soda mixed with coconut water, then add alcohol. The body of Bud Light Lime Coco-Nut-Rita is a solid medium. There is nothing overpowering about this brew, it has a nice balance to it. If you are a fan of coconut you should look this one up. For what it worth it not a bad drinking brew. It is really hard to pick up on the 8.00% ABV in this brew, it is just that smooth. This brew would go nice on a hot summer day. The mouth feel is Sweet, Coconut, Smooth, and Refreshing. Overall I am going to give Bud Light Lime Coco-Nut-Rita a soild 3 out of 5. I would look this brew up again giving the opportunity to. However not something I would run out an get on a daily basis. Anheuser-Busch, did a decent job with this one.

A: The beer is quite hazy white in color and looks like someone poured a bit of milk into water. It has a light amount of visible carbonation. If there was any traces of a head, it disappeared almost instantly after pouring out the beer into a glass.
S: Moderate aromas of coconuts are present in the nose.
T: The taste follows the smell and has flavors of coconuts and carbonated coconut water along with a touch of sweetness.
M: It feels light-bodied on the palate and has a moderate amount of carbonation.
O: This beer has nice aromas and flavors of coconuts, although you need to drink it quickly before it starts becoming very sweet.

Appearance: Very light in color, with some haze, resembling pear juice. The head is snow-white, and very small; what there is of it soon collapses. Minimal fine lacing is noted on the glass walls.

Aroma: The aroma is very much like coconut water and very pungent, vodka-like alcohol.

Taste: The taste begins with strong flavors of coconut, and alcohol. As the taste progresses, this doesn't change much, with the alcohol contributing a mild spiciness, and some warmth. Hop flavors are utterly absent. Finishes with a lingering, slightly spicy and bitter coconut, and the ubiquitous alcohol.

Mouth feel: Thin, but with little carbonation seen or felt.

Drinkability/notes: Its certainly alright, especially at the price: less than three dollars for a twenty-five ounce can. As well, Bud Light Lime Coco-Nut-Rita could serve as the basis for tropical-themed cocktails. Its certainly well-crafted and inexpensive, so its hard to complain.

Presentation: Packaged in a twenty-five ounce aluminum can, served in a South American-style Pilsener glass.

Notes via stream of consciousness: Wow, this is an interesting one. It's clear like water but very hazy. It looks like coconut water. It smell like coconut water as well. Well, at least lie sweetened coconut water anyway. I'm thinking I'm getting some alcohol too but I can't say for sure. It's not clear at least. The flavor - you guessed it - like sweetened coconut water. The interesting thing is that it doesn't seem overly artificial. Yes, you can tell it's not authentic, but it's not extract-like. What I'm missing though is the margarita side. Or is that just the sweetness? There's no discernible lime to me. Ahh, maybe a touch, but coconut rules the roost here. In the mouth it's medium bodied and lightly dextrinous, and just gently crisp. I should point out that it pours like a soda pop with a short head of white rising quickly and then fading immediately. As such, no lacing is left behind. How to rate that, I don't know. I mean, really, it's not even a beer is it? It's a malternative. There's nothing about it that says beer to me. No malt flavor. No hops. No yeast esters. Of course it's really good at what it is. On the other hand, why not just have a coconut rum drink? You might even come out ahead on calories, but I'm not sure about that. Ahh, I see why, this is already mixed and in a can. Perfect. The only question now is how to rate it. As a beer it's a complete failure, but otherwise it's very well done.
Review# 6,032

At some point today, New Beer Sunday (Week 680) will open up & this will be my seCANd entry in New Bud Light Lime Beer-A-Rita Sunday (Week 680) & more fodder for The CANQuest (tm). The impetus comes from a discussion yesterday at the FGBS in which I was queried as to having drank all of the new Ritas. I knew that I had a stash in abeyance, so I declined any new purchases until I could get home & see what I already had. I get the add & approved pic photo credit for this one, BTW. In addition, I am elated that my local, in-person trader, tone77, was the only other reviewer thus far.

The day will be dedicated to my late-Great Aunt Rita, one of my favorite relatives. She lived in a suburb of Kleveland with late-Great Uncle Max & was my late-maternal grandmother's sister. As a kid, they would come to visit my teetotaling, religiously morally upright grandmother with Max at the helm of his Caddy, its trunk laden with smokes & booze of every stripe. Y'see, PA has the State Store system & until recently wine & distilled spirits could only be purchased at a State Store & beer could only be bought at a distributor at a minimum of a case. Nothing was available on Sundays, a product of our Blue Laws, which is why NFL games start at 1300 - to be finished by sunset. Legend has it that on one visit, Max awoke early, was having a Vodka & Grapefruit, scandalizing my grandmother and offhandedly remarked that it was the last of his stash so following church, he would need to stop off & reload. Her response caused his mouth to fly open & his lit cigarette to fall into his lap & he began to weep. He informed Rita that right after church, they would be westbound for Ahia, toot sweet! Haha. Even better, as soon as he passed through the PA/OH Turnpike's tollbooth, he would shimmy the steering wheel, flash the high beams, toot the horn & lean out the window, proclaiming that he had returned to sanity. I remain unsure since they lived in Kleveland, but it was his gig. After that, he was like a Boy Scout - fully prepared. I loved those two & I don't know if it was a tic or that Max knew that I got it, but he would always punctualize his conversations with me with a wink. Man, when they showed up, the Vice Squad wasn't far behind - alcohol, tobacco, playing cards & dice. Hoo boy, was it a great time with them!

From the CAN: "Coconut Margarita"; "Contains Alcohol"; "Malt Beverage with Natural Flavors".

I have recently gotten hip to truly reviewing/rating to style, not to taste, following some jagov's taking another user to task for reviewing/rating to taste, something that you are NOT supposed to do & which I reported. Mine will probably be an outlier as a result, but at least you know the justification.

First of all, this was one of those massive new 25-fl.oz. CANs, as if they were doing anyone a favor with the added volume. They tend to fight me on the Crack! & this one was no exception. The other drawback of which to be aware (& it also happens with Crowlers) is that the vent sits further from the lip of the seam than in regular CANs, so dribbling (or worse) CAN occur during the Glug if you do not position the CAN right into the glass. My initial Glug produced two fingers of fizzy, foamy head that acted like pop & quickly dissipated into wisps. Color was a deeply-hazy/lightly-cloudy Fog White (SRM = N/A). 8=O Nose smelled like fresh coconut & I know from my seven (7) months on Camp Moscrip, Naval Station Roosevelt Roads, Puerto Rico, where we built our own still & used coconuts & bananas as the mash. We cut down coconuts left, right & center & shelled them for both the meat & the water & I CAN still smell & taste them on occasion. The style's taste is wide open to interpretation & since it is highly evocative of coconut, I am going big. Where the earlier Orange-A-Rita was too close to pop to be enjoyable, this was like coconut water. Mmm. Which leads me to mouthfeel - thin & watery. C'mon, you CAN't put any effort into making it have a presence?!? Finish was dry, but not breathtakingly bone dry as many AMLs are wont to be. I have been playing (Ha!) with hard seltzers of late, mixing them with vodka for a tasty treat. If they deigned to put this one in smaller packages (CANs), it would make a great rum mixer. That, or get some friends together, Crack! one open & then mix with rum for a party, but in its current format & its ABV, one of these would be enough on its own, let alone introducing rum. Still, props for one of the most enjoyable in this series.

I didn't add this beer, my homeboy woody did, but I'll be the first to review it. Poured from a 25 oz. can. Has a hazy, whitish color with a 1/2 inch head. Smell is is of sweet coconut. Taste is coconut, sweet enough to kick my diabetes into shock levels, a touch of alcohol as it warms.Feels medium/light bodied in the mouth and overall, it ain't bad, but will be just to sweet for many.