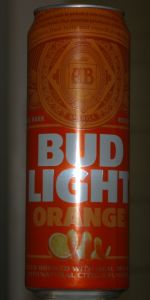 Notes: Brewed with real orange peels for a clean and crisp taste that highlights natural citrus flavors.
View: Beers
Reviews: 67 | Ratings: 172 | Log in to view all ratings and sort
Reviews by basaywhat:

25 oz can. Pours a clear golden color. Little to no head with no lacing. Nose is orange and corn. Taste is artificial orange, corn and citrus. Might not be too bad on a hot summer afternoon.

As a long-time craft beer aficionado, one who's never one to turn down a double IPA or giant, Russian stout, my palate is obviously far too sophisticated to...to...

Oh, wait, this is actually kind of tasty. Lots of orange in the smell and the taste. Huh, where did that can go? I just poured it a minute ago. And why do I keep picking up six packs of this stuff every time I'm at the store? I'm a BEER SNOB DAD GUMMIT! I'll not have the likes of this mass-produced swill befouling my refrigerator!

So why do I keep buying it? Answer me?! Why did I ever try it to begin with?

Why is it so gooooood??

Bud Light Orange brewed by Anheuser-Busch, with an ABV of 4.20% This Light Brew pours out a nice light amber color with a small white head. The head goes away fast, an there is thin mirror lacing to this brew. The smell is rich with orange and other citrus flavors. Kinda reminds me of Sunny D, not saying that is a bad thing. You also pick up on grains and malts in the smell as well. Now for the taste, it is sweet with orange/Sunny D flavors. I will give it this , it is refreshing. This brew would go nice on a hot summer day. There is nothing overpowering about this brew it has a super nice balance to it. Really easy drinking brew. The body of Bud Light Orange is a light medium. This Bud light is more enjoyable than the Bud Light Lime. If you are a fan of orange or Sunny D you should look this brew up. The mouth feel of Bud Light Orange is Light, Clean, Smooth, Orange, and Refreshing. For what it worth, we know what we are getting into when you pop a top on one of these. Overall I'm going to give this brew a 3.25 out of 5. I would look this brew up again giving the opportunity to. Not the best but not the worst. Something different to change it up.

Aroma is of fresh oranges. Mostly fresh oranges. Impressive. Faint bready malt aromas trailing behind it. The highest aroma score I think I've ever given a Bud product.

Flavor, well I laughed out loud. I hope that doesn't make me a snob. It's mostly orange MiO/sport drink flavoring. Following that is a note of bready 2-row and slight beer skunk.

Feel is syrupy to start, then the carbonation takes action and develops a crisp feel with a crisper finish, but what's odd is the coating it leaves on the tip of my tongue, like chemical.

Overall, it's marginally drinkable, bordering on disgusting. Nothing I would ever return to. It's a good float down the river beer.

The look and feel is what you would expect from this mass produced “wow our beer is orange now” marketing gimmick. The danger comes from its strong chemical taste and smell. My true, genuine attempt at describing this to a friend was “imagine you’ve run out of an orange scented shampoo and to get one last wash out of the bottle you filled it up with water and shook it (we’ve all been there, right?) - now imagine you drank it”. That’s what this vile brew tastes and smells like: watered down orange shampoo. I drank half the can and felt nauseous for an hour. I tried dumping it down the drain and gagged from the smell. The fact that it’s hitting every store is a testament to the macro brew’s ability to throw money and influence around.

Not very good at all , I can drink bud light but this tastes like orange soda , only reason I got it was because I found a 12 pk of bottles for 6.99 but I regret buying it.

Someone brought these to our office holiday party and after already having a few other choice beers, I decided to branch out and give it a try. I should have trusted my gut and skipped it. I made this account so I could tell everyone how awful it is. It's like someone decided to mix orange soda and bud light. The orange flavor, although they claim comes from real orange peel, tastes chemical and cheap. Not refreshing at all. Stay away from this.

Tatse: can taste the strong orange flavor. Cant really taste the alchool which i rather have a slight alchoool taste. But i over loked it beacsue i still liked the flavor.

Ugh...where do I begin with this?? This stuff is just gross. Should have known just by looking at the bottle. The bottle looks like orange soda. And it tastes like someone mixed Sunkist and Bud Light. Not good at all. Not even a good hot summer day beer. One of the worst I've tried in a while.

Pours a clear straw yellow colour, generating nearly one finger of foamy white head that dissipates in less than a minute. A narrow collar and filmy-thin cap are the only remnants. Smells like orange Crush to me - almost as sugary as a soda, with barely any semblance of the underlying cereal grain.

It doesn't taste awful, but I can't say I'm a fan. Its orange flavour and sugary sweetness are the spitting image of an orange soda - albeit a slightly undercarbonated one, with faint notes of cereal grains hovering along the edge of perceptibility. Light in body, with middling carbonation levels (for a beer) that gently prickle the palate; feels a little too slick, which makes it a bit less refreshing than it might otherwise be.

Final Grade: 2.8, a disappointing C grade. Bud Light Orange isn't much better than Bud Light Lime... in fact, it's worse IMO, and frankly I'm surprised it took 10 years for them to come up with this variant. It's a sugary soda-pop beer for people who don't like the taste of beer. I think Coors' orange-flavoured swill wins this round by a Leno chin's length - but in all honesty (and assuming that no one hands me a free can), I doubt I'll return to either one in the future. I give this beer two more summers (max) before AB pulls the plug and moves onto Raspberry Bud Light, or Lady Bud Light, or Tartar Control Bud Light...

The orange aroma and flavor is definitely present. The orange flavor comes through as artificial although not unpleasant. Lacking in depth of flavor but far better than I expected.

Have drank a twelve or so of this and I don't much care for it.
It does taste like bud light with strong orange tones. It just did not do it for me. Not poor but not average either, about midway between

The Bud Knight has blessed his people with an elixir crafted by the Gods.

Sad to see so many hate this beer. I myself love a great IPA but after working out, I'm looking for something fresh and with a great taste and this is it. I love it. I hope it's not limited and that it sells everywhere. So many beers taste the same and this one stands out with refreshing change.

Clear light orange with one finger of white head. No lace.
Smell is orange.
Taste is mostly orange some malt.
Mouthfeel is light with good carbonation. Finish is lightly dry and somewhat sweet.
Good Summer weather beer. From a tall can.