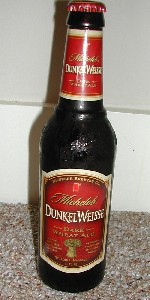 Pours out a dark reddish brown amber that allows a decent amount of light to get through, and a small bit of a haze to it.

Smell. Clove and bubblegum are the dominant characteristics to this one. There is a little banana as well, but not too much to me. The aroma certainly seems to be quite sweet...not to say other dunkelweizens arent sweet, but this one has a candy-like smell to it.

Taste. Flavor is sweet too. The cloves stay potent, but the banana flavor comes in stronger than in the aroma. the maltiness in it is nice, but a bit tame. Aftertaste is sweet and still reminds me of a sweet candy flavor.

Mouthfeel. Body is just a little thinner than i like, as it has just a little bit of a watery feeling to it. not to say it is very watery, I just would have liked a little more body. Carbonation is ok as well, but i like this style to have more than this one has.

Overall, a pretty decent dunkelweizen. I like this style as it seems to be a rather consistent style as far as getting good tasting beers within it, no matter who makes it (well, perhaps not really...but i think it should :). I do wish it was a little fuller of a mouthfeel, but i cant complain with the price.

Michelob Dunkel Weisse has a medium, creamy, beige head and a clear, copper color with lots of bubbles streaming up and nice lacing. The swirl & pour did not cloud it up, surprisingly. The aroma is strong on banana and light on wheat and clove. Taste is banana, some wheat, and a wonderful hop spice. Hops show up as well, and this really gives it a tasty balance. Lots of ticklish carbonation with this, and there’s also a smokey aspect. Mouthfeel is light to medium, and Michelob Dunkel Weiss finishes clean, refreshing, and super-drinkable. Too bad it’s gone, because it’s really outstanding.

I'll have you know, the only reason I chose to do a review on this particular beer is because I was so blown away by how much better it tastes than I expected. Being Michelob, I didn't have too high of hopes - Michelob is better than most of those everyday brews, but you know what I'm saying.

A - Pours a dark reddish brown color - not very appetizing. Zero head, no lacing. But that's ok...for me. The overall look kind of reminds me of the Mexican soda drink called "Jarritos", particularly the Tamarind flavor. (I lived in Mexico as a young child and so I knew all about those things in Mexico...so good.)

T - Up front I'm getting some malty carmels and wheat - typical wheat beer, except, and I like this, it's not overly tangy like most Wheat beers. Refreshing. I really should have drank this after mowing the lawn instead of before. But again, I was kind of expecting this to be a let down, so I wanted to get this one over with so I could enjoy what I've got left in the fridge. It's very watery, but that goes along with the refreshingly smooth overall taste of it.

O - I like it. It is good to see that it received a B here on BA. I like that, but I think it could be even a B+ or even A-. That's just me, though.
Definitely won't be the last Dunkelweisse I drink in the future. If I see this on the Beer menu at a restaurant, I might just order it...as long as I can enjoy enough rare beers on the menu.

Pours a medium amber with a reasonable cloud. Head is adequate and leaves a nice lace.

Aroma is better than expected weisse yeast and a touch of banana. Band-aid and roasted grain. Fruity yeast is complimented by a nice clove and nutmeg aroma.

Flavor is full on weiss. Banana and bubble gum, clove and lemon grass. A good amount of roastiness to the malt makes this entertaining. Hops are in the background. My only complaint is a slightly mettalic, coppery twang that comes out of nowhere.

Body is a little thin, but not terrible.

For AB this is a pretty good attempt.

(EDIT) As this beer warms it gets better exponentially. Very good example of a weiss beer.

One of the best if not the best of A-B's efforts. Classic weisse aroma with the standard spicy fruitiness found in the Bavarian unfiltered wheat beers. Poured with a good long lasting head and plenty of lace. Nice dark hazy amber color. Flavor is same as aroma but with more malty. Definitely fresh! Very drinkable. One thing is its lack of depth. Very short finish. But pleasant.

Pours like cherrywood with a middling little head. Not bad, but not great.

Tastes like honest to god wheatmalt--clove and white pepper--but then there's a nice, firm nuttiness to it that'd be more at home in a brown than a weisse. It works.

Tastes like it smells, a mildly spicy hefe mellowed out by a nice nuttiness. The back end is more fruity and herbal, and it finishes off on some tasty, lightly alcoholic yeast. This is well balanced, tasty, *and* complex.

I'll tip my hat to a well brewed beer regardless of who brewed it. This isn't world-changing, but it's a dang good session and were it not for political stuff I'd probably buy it ahead of some other kind of medium-fancy beer, lik, say, Fat Tire.

Slightly hazy medium-amber with a small, off-white, foamy head that diminishes to a tenacious film. Smell is very wheat-dominant. Pineapple, caramel, a little clove, and a lot of banana. Toasted malt and a wheat sweetness on the taste. Banana still there, clove more noticeable, light spice on the crisp finish. It has a medium body, dry and slightly chalky texture, and moderate carbonation. It's an OK beer, nothing seems TOO out of place, but it's nothing special. A bit weak for the style.

The smell had a nice sweet german yeastyness to it, big clove and bananas with a touch of sweet maple.

The taste is a bit on the thin side, but does have a nice lightly sweet and fruity flavor, with a good bit of banana nut bread showing up. Could use some hops.

The mouthfeel is thin and watery.

Overall a farily average Dunkelweiss, still probably one of the better Michelobs I have had.

Smell: Aroma of toasted bananas and dark wheat malt with a zing of clove-scented spice.

Taste: Toasty, tangy dark wheat with a mild, unassuming sweetness. Kick of banana and clove on each and every sip. Hints of caramel come and go. Very light spicy hops and bitterness. Drying finish with a lingering spiciness.

Drinkability: Would I have another? I highly doubt it. But it's still a commendable try for A-B.

Quick forming and quick dissipating head, which is light tan in color. The body is dark copper in color with slight haze. Not really much in the way of a real weisse beer.

The aroma is bready, with a slight hint of clove and some fruitiness.

It starts out really quickly with an over ripe banana flavor, but is quickly cut by a salty and metallic flavor like with some tartness.

Thin in the mouthfeel and kind of boring. This brew was touted as a decent interpretation by some, but I disagree.

Presentation: 12 oz longneck, red label. The date on this is a bit cryptic, instructions say to swirl the yeast in (but I didn't read that til after pouring).

Taste: Medium bodied with a fairly high level of carbonation. The same banana bread comes through here, with a bit of nutty malt flavors too.

Overall impression: Drinkable beer, not a bad example of the style. This six pack will go fast.


Michelob Dunkel Weisse from Anheuser-Busch
Beer rating: 80 out of 100 with 324 ratings