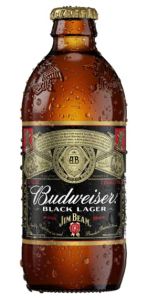 Notes:
View: Beers
Reviews: 40 | Ratings: 82 | Log in to view all ratings and sort
Reviews by dons:
None found.

T - Some caramel roasted malt, light whiskey, finishes on the sweeter side with a lingering caramel and delicate whiskey presence.

M - Big medium body with initial carbonated pricklies that give way to a soft finish.

O - By far the highest rating I've ever given something with Budweiser on the label, enjoying this one.

Budweiser Reserve Black Lager, a collaborative effort from A.B. and Jim Beam. Poured from the bottle into a pint glass, the head's three fingers thick and eggshell brown, which webbed lacing, and a clear black body.

Smells like coffee, gloriously roasted malts &a slight touch of the Jim Beam.

I taste a slight sweetness with the aforementioned components. Nothing boozy tasting about this brew. There is also a minute smokiness going on, which I suppose is attributed to the stave aging this has undergone. Smooth and clean finish.

I was definitely hesitant buying this beer. The prior Reserve releases have been decent enough but fell a bit short on the finish. I was pleasantly surprised with the result of a beautiful walnut colored, toasted malt, chocolatey delight, with a smooth mouthfeel. I have had German and Russian beers that tasted similar and that speaks to the quality. As for the finish, once again I wish there was more of a hop presence. That being said, best of the Reserve series in my opinion.

T: very very smooth. Strong malt, sweet vanilla, little Smokiness that lingers at the end. You can taste a little bit of the bourbon Barrel aging but it’s not very pronounced.

O: this is a great drinking beer. It’s very smooth has good flavor, and a good showing from Budweiser. I personally like the copper lager more, but this is an easy drinker. Just be careful 7.1% ABV you can easily find yourself in trouble haha

Taste: Sweetish toffee, vanilla leading towards light additions of toast and roast (giving a fast, fleeting hint of washed-out coffee). Chocolate and a kiss of zesty oak - as before, it's all very, very, very mild. Semi-dry, lightly woody, toffee-tinged finish.

Overall: Well, it's not the worst thing I've had this weekend! At best, you've got a rather light-leaning albeit clean black lager. Its Jim Beam character is also on the low end, though, much more and it would've really squashed the underlying beer.

Admittedly, I have very strong negative opinions of Budweiser and its family of beers, however, I will set all that aside, and review this as honestly as I can, as though I were given this in a blind setting.

Pours a brilliant mahogany brown colour, nearly crystal clear, and remarkably red when held to the light. The beer is topped with nearly four fingers of incredibly light tan, dense, and foamy head, which has some impressive staying power. Some tenacious lacing is left behind as the head slowly slinks down. A very fine trail of effervescence can be seen rising straight up the middle in a thin pillar.

Nose: That classic clean lager crispness with these deep, warm, rich toasted malt aromas. There's very simple grains at the base of it. After spending some tine nosing it, the roast really comes to the forefront, and begins to smell more and more like a stout. Rich caramel, cocoa, nutty toasted barley all serve to create a very "dark beer"-like aroma, and yes, the Jim Beam barrel stave influence is quite there, and doesn't need much digging for.

Palate: As with many dark lagers, that first sip is always quite surprising. After having your nose buried in a wafting bouquet of dark toasty malt, you condition yourself to expect a rich roasty experience, and are subsequently taken aback by the light lager delivery. However, do not be fooled, as this is truly nothing like Budweiser's (in)famous American adjunct lager - watery and bland, seemingly lacking any and all flavour. No, this is actually quite flavorful and stout. It's similar to a dopplebock in many ways. Clean, smooth lager malt, almost fresh and bright, and then the gentle roasty notes flood in, caramel, toffee, a bit of cocoa, a touch of coffee, with the dry roasty character getting a bit roastier as it progresses. The bourbon barrel stave influence is also detectable, with a hint of bourbon and a hint of oak flashing here and there. The only real Budweiser influence comes near the finish, with this thin, light, slightly metallic taste that seems to linger for a bit, though thankfully masked a bit by the dry roasty finish. It isn't particularly complex or groundbreaking, and the bourbon influence isn't tremendous, but it has all the trademarks of a black lager, with a little bit of something extra.

Mouthfeel/Body: This is the first thing that captured my attention upon taking the first sip. I was expecting a weak, watery mess, but that just isn't the case. This actually has some heft to it. It sits in this perfect little area between light and crisp, and smooth and heafty. It's crisp and drinkable like a lager should be, yet there's a wonderful roundness to it, that really helps accentuate the roasted malts. Effervescence is fair, very fine in nature, and a bit on the lacking side, but not so much where the beer drinks flat. Some roasty drying in the finish.

Overall: Admittedly, I'm not only surprised, both also rather impressed that Budweiser managed to pull off an enjoyable beer. It's a shame they don't put the same effort into their core lineup. In the grand scheme of things, is the beer itself something to write home about? Probably not. Is it so unique and interesting, that it practically stands in its own category? No, hardly. Is it a fairly enjoyable, fairly affordable beer that stands a bit above its brand reputation? Absolutely. If you just want a good black lager, and aren't looking to blow $16 on a four pack of pints, I highly suggest giving this a try. I know it says the B-word on the label, but just try to ignore that long enough to take a sip...it's not so bad.

Budweiser Black Lager has a very thick, beige head, a clear, bubbly, copper appearance, and minimal glass lacing. The aroma is of faint brown bread crust, and the flavor is similar, but more pronounced, along with a syrup aspect, but no bourbon, from what I could detect. Mouthfeel is high medium, and Budweiser Black Lager finishes medium dry. RJT

Flavor: More strong chocolate on the tongue. A little bit of burnt, smokiness. Then a profound bourbon flavor. Sort of a mashed, over-ripened apple flavor. Maybe some hints of vanilla if I'm stretching. Just mostly milk chocolate with a smokey, bourbon finish/bite. (3.50)

Feel: Heaver-bodied as expected for 7.1%. Heavy and under-carbonated. Drinks a little like bourbon in that regard. Leaves a bourbon/alcohol bite on the palate. (3.25)

Overall: Some nice milk chocolate flavors get washed out by a smokey bourbon flavor. I suppose many will like this, but for me bourbon and beer don't really mix well. Has that fire-safety drill smokehouse smokiness to the flavor. Then the alcohol is stronger and has a heavy bite. (Final Rating: 3.63)

Interesting flavor. It's robust and dark roasty malty, but with a very distict "dryness" about it, and with the slightest hint of smokiness at the end. Overall it's a decent brew.

Budweiser hits it out the park yet again with a stunning Beer. The collaboration with JIm Beam is proving to be a Beautiful relationship. Lets stat with looks. Pours from the bottle a bright umber and settles in the glass with almost no cap. A slight swirling gives a bit of cap the rapidly dissipates. As for the Color, you get a deep dark umber. Very simular in appearance to a stout. Little to no lacing can be seen. Aroma is nice. On the nose I get a comforting hint of toasted oak and vanilla. I wish someone made a scented candle that smelled as good as this Beer! Rich and warm. This beer is inviting you to have a sip. Moving on to taste. On the top, I get a wonderful toasty Oak and undertone of vanilla. Very much a Whiskey profile of flavors. The middle is where a slight bit of rye sourness comes in and that warming effect of alcohol. The finish is a resolve of the whiskey notes. it develops into a boozy, woody, sourness. Smooths out as it leaves. Semi-dry finish. The Roasted Malts provide you with a char that complements and adds backbone to the flavor of this Beer. Now talking about the feel. Not as thick and sticky as I would have liked to see, however, Budweiser is going to go for drinkability above all. So, rather light to medium body. Over all, In love with this Beer! enjoyable and encourage you to try it! This is a Great Beer for the winter Months. Cheers!

This is a Budweiser? Wow! Color me impressed.

Overall:
A really nice sipper that hides the alcohol well and roughly corresponds to the Schwarzbier standard except for the high abv and thicker mouthfeel. Think of it as a high gravity wood-aged interpretation of the style.

Bottle from Hannaford caught my eye, what the hell I'll try it.
Dark brown with garnet at the edges and a light tan head that persists. Light toasty bready light hints of chocolate and some light vanilla and oak tannin. Not horrible but could use some more body.