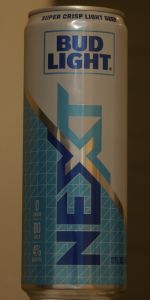 got a single and poured it into a glass. almost looks like water. Doesn't taste like beer. has some odd taste to it.

Clear, pale yellow, fizzy head that disappears. Smells almost like candy, or a low-carb sweetener, or burnt popcorn. Taste is a hint of the same odd/mild/fragrant sweetness, but with a hint of corn syrup and a faint rotten 'garbage juice' flavor that I can't quite put my finger on (almost like cheese...?) and a lot of clove which might gain it some points with the nerds... it isn't the worst tasting beer, but it isn't good, either. Gains points for being stupidly easy to drink and having zero carbs

It should be listed as a different style, but this is the first of it's kind: A beer-flavored alcoholic seltzer. Some credit is due as this was a cool experiment by InBev, but the experiment was a failure - maybe add some hops? As it stands, I expect this to disappear soon and quickly become a relic

You preppy financial advisor types might not like to hear this, but this beer is fine. It's barely beer but the flavor isn't bad. Definitely fruity and barley tastes like a beer, but for those that don't like seltzers or are on a low carb diet, This is a must. Obviously this wasn't going to taste like your crafty local IPA's, it wasn't meant to. It is what it is and its not half bad.

Poured from a can. Super light in color and clear with a small white head. Smells of corn, and a sweet floral hint. Flavor is sweet corn and slight fruit and floral. Feels and tastes more like a seltzer than a beer, it's like an odd cross of a cheap light beer and a seltzer. Not a fan. Downgraded this a little more because I almost didn't finish it

So right off the bat this is the lightest colored beer I can ever remember - It's a shade of gold barely above clear - oh yea and the beer itself is perfectly clear and very effervescent. It essentially looks like carbonated seltzer water. A couple finger sudsy head forms on the beer, but quickly fizzles out. The aroma is ... well ... missing? It's got some light notes of light corn, sweet white bread, and that's about it.

So, the taste is incredibly bland ... Its tastes like topo chico with a subtle hint of light beer. The comparison to seltzer is blaring in its blandness. But here's the thing - I would drink this over *any* of the hard seltzers on the market. Sure it's bland, but it tastes way better than any of those aspartame laden seltzers. Feel is essentially carbonated water. Think topo chico. It is super refreshing and easy to drink. Fizzy, bright carbonation.

Overall this is a terrible beer compared to other beers. However I strongly suspect this is a "beer" for seltzer drinkers and in that regard its the best option on the shelf.

Bud Light Next brewed by Anheuser-Busch with an ABV of 4.00% This Light adjunct lager pours out of a 12oz slim can into a pint beer glass. The color is a super pale yellow color almost clear with a super thin head that goes away fast. No lacing to speak of, not saying that is a bad thing. The smell is faint with mirror grains an malts, not much to write home about. So far nothing bad , but nothing great either. Now for the taste, it is WATER... No flavor what so ever, tap water has more flavor than this stuff. Do your self a favor an get a pack of flavored Seltzer water. Was really hoping for more with this brew. It is light an smooth, if you want something that doesn't taste like beer, here you go. I would not buy this brew again, period. Sorry Anheuser-Busch, this is a definite no go. I want some kinda flavor. I know the low carb thing is in, but Michelob Ultra at 2.6 Carbs an Natural Light at 3.2 Carbs, lots more flavor an it not horrible.
Just my input.

Like drinking a LaCroix with a splash of light beer. Should not be labeled as beer. Was excited to try because I'm on a low carb diet. I'm an alcoholic and I chose to not drink over drinking that shit. That should tell you all you need to know about the taste

Light enough, “drinkable”, but still manages to leave a syrupy feel in the mouth. Not for me

12oz slim can stamped 06AUG22 VO0027 poured into an vintage hourglass pint glass at fridge temp 4% ABV 80 calories 0 carbs per label. The beer pours brilliantly bright with a hint of yellow color and fizzy snow white head letting me know this isn't water. The head recedes to a thin ring and hangs on. The aroma is faint with a hint of ambiguous citrus. The taste is lemon water with a hint of grain hidden way in the back. Mild bitterness. The mouthfeel is very thin bodied with above average carbonation and a dry finish. Overall, inoffensive light lager.

Bought a 12 pack at Safeway for $9.99 and now I know why it was so cheap. With 4% ABV, this sucker keeps you sober enough to drive home after your little tailgate party. Wifey also won't get a beer belly drinking it so that's a plus. In terms of taste, it is godawful. It is worse than a normal Budlight. Tastes like if you wrung your sweaty gym shorts out and drank it.

you are about to start seeing this everywhere, they are pushing hard, just watch the super bowl tomorrow (from what i hear anyway). this is supposed to be the next generation of bud light, and i am positive that it is the lightest beer ever made, zero carbs is the thing here, zero, in a beer. i am not a huge fan of this better for you space in beer, its not that many calories to save, id rather sacrifice elsewhere and drink beer that tastes good, but this space continues to grow. i kept wondering if it would be good, so i was surprised when my first thought on tasting this was that its not bad, its almost more important that it isnt bad than it is actually good, it doesnt taste like much, but that works both ways, nothing metallic or cheap, not lousy alcohol either, and while it has just a little sweetness in the finish and maybe a light fermentation element if i seek it out, its impossibly mild. it looks like an energy drink in the pale blue and silver slim cans, i thought it might be clear until i poured it, like water clear, and its close, not even yellow, maybe one shade toward beer colored away from the absence of any color at all, just wild, but it does have and hold a pure white head, has a ton of sparkling carbonation, and looks really tidy, but the lightness is almost disturbing. no hops at all in aroma or flavor, just a little generic malt sweetness in the center, an almost red apple suggestion too somehow, minerals, and faint crackery character late, just so minimal that the cleanness and sort of apparent purity it has stands out, especially compared to the lot of other cheap lagers out there in this space. this will either revolutionize this category and everyone else will follow, or people will realize this is the final evolution of flavorless healthy beer and it will kill the entire genre, i am certainly hoping for the latter, but for now i guess this accomplishes its objective. the fact that its so minimal works in its favor i think...

Bud Light NEXT has a very clear, bubbly pale straw appearance, with a thin head of foam and minimal lacing. The aroma is of fermented grain with subtle lemon. The flavor is of water, with possible cereal flavor. No bitterness is detected. Bud Light NEXT has a thin body and a dry finish.

Poured from a can into a pint glass
Appearance – The beer pours a clear very light straw color with a tiny head of foam. The head fades super-fast, leaving almost no lace on the sides of the glass.
Smell – The aroma is light overall, consisting mainly of a light corn and caramel smell.
Taste – The taste begins with a very crisp and very, very, light grain taste that fades away almost instantly. There is a little bit of a caramel and corn sweetness, along with some light paper like tastes, all of which fade a bit as the taste advances, leaving one with a very seltzer like taste to linger on the tongue.
Mouthfeel – The body of the brew is super light and thin with a carbonation level that is very high. For the abv., 0 carb nature, and style the feel is appropriate, making this one quite seltzer water like and very slammable.
Overall – Tastes more like a seltzer then a brew with a super light beer flavor. Good for hot days of long sessioning.


Bud Light Next from Anheuser-Busch
Beer rating: 73 out of 100 with 22 ratings