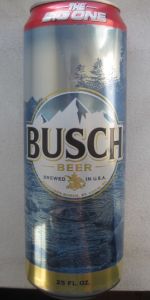 Notes: Busch and Busch Light are both brewed with a blend of premium American-grown and imported hops and a combination of malt and corn to provide a pleasant balanced flavor. Additionally, Busch Light undergoes a longer brewing process that produces a lighter body and fewer calories.
View: More Beers
Recent ratings and reviews. | Log in to view more ratings + sorting options.
Ratings by hybridnoisebloom:

I'm sure I must have had this back in high school and forgotten, but I'm recently revisiting any AAL I can find. Oh my is this abysmal. I just had an Old Milwaukee and it was a gem in comparison. Pours piss yellow with bubbles that fade to nothing. Aroma - I had to smell this multiple times to confirm with my sensitive sniffer - is wet cardboard. First time I've ever engaged the lowest end of the scale after near 1k beers. Flavors are much "better", in that it's remotely palatable, though I'm not certain what the heck is going on - just corn/grain? Dunnoh, but finishes fairly dry and clean thankfully, though with a bit of metallic. Yikes.

Picked up a tall can at the beer store (Ontario) for $2 which was on sale, normal price $2.25. It’s not the worst beer I’ve had but don’t see myself buying this again. There is better options at this price point.

Truly terrible. It's appropriately light, but has a grain profile that tastes like they used expired materials. There's no reason to drink this crap when Hamm's exists. Don't do it to yourself.

This is the beer of my college days. I drank so much Busch over a 4 year period, out of a keg, I have very little memory of that time period. Went up to Circle K to fill truck up with gas, so I was of course then low on funds and didn’t want to spend over $10 for a 12 pack of something. I already know I am shooting low. Was gonna buy Budweiser till my eye spotted the limited edition Busch 12er for 9.99. Had to. Just for nostalgia. It’s pretty bad, tastes kind of like beer. Budweiser which also is a poor beer tastes a smidge better. But my only other option was an 18 pack of Rolling Rock for $15. Which I probably will but next time I fill up truck for gas. I have Busch a 3, but really it’s more like 2.5-2.75 overall. But a good memory of when very little mattered and I was just pounding plastic cups of keg Busch beer.

So Many People Trash this Beer I think Because it's cheap but I love this beer !

This is a beer that is beyond refreshing and is perhaps the most underrated beer for its price point. Yeah it may not look as good as a craft beer, but smell just reminds you of relaxation and bliss. It just feels so nice as it pours down your throat, cooling you down after a long hot day outside. The mild yet great taste of Busch is what people look for after a long day’s worth of hard work. There’s nothing like an ice cold Busch during a hot fishing trip at the river.

This is a solid , cheap hot weekend beer for a budget. #DrinkWhatYouLike

Its a cheap American corn beer, the f*ck do you want? Why come on this site to bitch when you know what it is? This isnt a craft, ipa, micro brewshit. It a beer you buy to drink after work or at the dock or vegged out while watching football. If you can find it in a tallboy you know what it is. Not great, not awful, some foam, only skunked if warm. I cant believe theres a light version of it based on how light this one is, i would never try that, but Michelob light exists so hell maybe theres some kinda trashy golf fan out there who it would be perfect for. Its middle line American beer, dont bitch, if you like budlight you wouldnt be able to tell the difference blindfolded. Throw me one, can or bottle if it exists, i wont complain.

Honestly, I made an account because of how wrong I think the current score is for this beer. There's no way busch isn't paying for reviews on this site or something. I've been known to drink shitty beer in the past but this one really puts the SHITTY in shitty beer. It's simultaneously too sweet and also lacking in flavor. It leaves an awful taste in your mouth. In my opinion, literally every other beer at the same price point is better.

12oz can - review from notes

This is a decent adjunct, I like how clean it drinks. You need to keep it ice cold, but that goes without saying for the style. Just okay, with very little off-flavors (a little skunk and rotting corn water, especially if it heats up)

I don't understand what the fuss is about. This isn't the best beer but it isn't the worst either. Perfect for when you are on a budget or having a party.

Drinking this at a friend's house, free beer is good beer, right?
Well no, not necessarily.
Looks light golden yellow with a nice foamy head that dropped quickly to zero and no visible lacing.
Smells like corn, I know there are people who like corn in beer, but I do not.
Taste follows the nose.
Mouth feel is light for the style.
Overall free beer is sometimes okay beer and that is okay.
Cheers!

Not bad for a cheap beer

It does have a beer flavor but its light still good

Probably will get more in the future

I'm a connoisseur and I have tasted some of the best rated beers along with the worst rated beers and living in Southwest Texas all my life I've learned that the majority of people in my area like crap commercial beer and think craft beer is terrible. An excellent beer to them is Natural Light which is if I'm not mistaken the lowest rated beer on BA. It's always hot here so after a blazing hot workday you won't discriminate an ice cold beer especially if it is offered to you. I had a Milwaukee's Best one time that was so good and so refreshing but only under extreme conditions. Beers like Budwieser, Busch, Lone Star, Coors, and Miller I prefer to drink with the addition of key lime juice and salt. I also prefer cans for this because you can break the tab off, use a lime to wipe all over the top and then salt it. It's the only way I can enjoy these types of beers but when money is tight I usually get Miller Highlife or Lone Star. I had to buy Busch today because I couldn't find a store carrying the ones I wanted. Now I will discuss the attributes without the addition of lime and salt.

Looks: If you hadn't poured it yourself you'd think it was a glass of ice cold piss.
Smell: Smells like ass with a hint of corn. Maybe peanut
Taste: Tastes like whoever brewed it had no concern to mask the alcohol which has a small amount of methanol along side the ethanol.
Feel: The mouth feel is not something that is worth rating. You wanna swallow as fast as you can. Do not swish.
Overall: Overall this beer is tolerable but far from gourmet. A commercial beer will always have low ratings.

Upon opening it, I felt as if a dead skunk had farted directly into my face. I then noticed the sweet aroma, which had hints of Zyklon B, Sarin, and rotting fecal matter. Mild undertones of oak. As it pours into the mouth you notice the dread first. An abomination such as this biological horror is an affront to God Himself. The foam coats your tongue and stings like razor blades coated with ghost pepper and salt. It goes down like Fluoroantimonic acid and triggers a wave of potentially deadly seizures. The more brew that flows FROM the can, the more of your soul flows IN to the can. The aftertaste is comparable to going down on an old Taiwanese hooker at the end of her shift, in the dark with bad aim on your part. I mean really, you were drunk as hell and God only knows what you put your mouth on. As this concoction reaches your stomach you get the feeling that you've been brutally violated several times but upon calling 911, they just told you that "You can NOT undo what has been done". You and you alone caused this atrocity. You immediately begin feeling as if you've inadvertently murdered the entire human race. Your genitals shrivel up and turn to dust as you watch in horror. The screams of men, women, and children beg you-BEG YOU, to kill them. It becomes apparent that you have unleashed an unyeilding evil. A dark and malignant miasma. The fallen angels bellow with reverence, vindication, and approval. The shadow grows near. You feel as if you have caused an extinction level event and more suffering than any intelligent being in the entire Universe could ever comprehend. As this surprisingly affordable brew is exposed to the oxygen in the air, it reacts like a fine wine. This aeration causes the smell of chlorine gas and the taste of sulfur and moldy roadkill. God is dead. Blood pours from the sky in torrents as dying children cry out for their parents. All semblance of mercy, of law, order, and justice has been erased. And what rough beast, it's hour come round at last, slouches towards Bethlehem to be born?

Not bad for the value and would consider it a great beer for casual get-togethers and cookouts!

I'm a beer drinker. I like good beer, like crafts of various types, and I like low quality beer like Hamms. I'm constantly laughed at by virtually everyone that knows me over my love affair with Hamms. Enter Busch beer. Being a Hamms conissouer, I thought that if I could drink that I could drink anything. I bought a 6 pack of this poison 2 days ago and let me tell you...it IS poison. It smells like wet cardboard. The kind that gets stuck at the bottom of your trash can for months. The feel is that of something terribly wrong happening in the mouth...perhaps carbonation, perhaps a toxic chemical reaction with human saliva.

Now for the taste - As mentioned, I can drink pretty much anything but I honestly couldn't manage to choke down a half can of this before pouring it out (my buddy Mike was there...he saw it happen). The taste is 100 percent carbon paper. Pure and simple. $5.99 a six pack...it's not worth the .99 much less the 5. Steer clear at all costs!