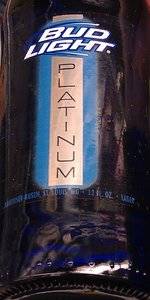 haven't reviewed this yet. Poured into a shaker pint.

L: 2.75. a shade away from ginger ale. Head disappears quickly. Good carbonation despite the twist-off cap
S: 3. No hop character to speak of. Barely and rice.
T: 2. basically Malt liquor. Not a beer you want if you want something that tastes like a proper lager.
F: 3.25. With the higher ABV comes a harsher feel.
O: 2.75 Do not recommend

12 oz. poured into Pilnser glass, $2.09 at HEB
Look: Light straw, no lacing, nearly transparent, average carbonation, no head
Aroma: Sweet corn forward, a little skunky
Taste: A little sweet, skunk taste on the back end
Mouthfeel: Flat, no carbonation
Overall: Disappointing, no head, the sweetness is cut by a poor finish. Pretty boring. I don't mind a big brewery offering but I do mind a bad offering. Not worth the money
Do not pair with foor, or even drink.

I wouldn't say it's awful but it's just a flat line. Not good, not bad. I don't know what they were trying for but they missed it. The only redeeming quality is the strength of it. It gives you a decent buzz.

If ur a bud light guy this slaps. The same bud light flavor with a stronger bud light taste. With a stronger feel. So good. Ppl who don’t like it are just basic ipa drinkers who thing their superior for being “edgy” even tho IPAs dominate the market. Think PC video game players. Both are inferior but are arrogantly quote on quote… sigh…. “‘Superior”’

Edit: all bias aside this doesn’t deserve a terrible rating it’s honestly so good. Like a good basic hair on your chest without the alcohol burn drink. So fire. If u have a pussy between ur legs you’ll think different tho. Either way happy drinking.

They took bud light and somehow made it higher ABV while still being extremely watery. If Bud light is your go-to party beer, you'll like this one because less will do more.

Watch the head on this beer disappear faster than a trailer park prodigy skips out on his baby mamas child support. This is literally just a malt liquor in a pretty blue bottle. I mean don't get me wrong it has 50% less of a diesel taste than a Natty daddy or steel reserve, but it's still a high abv truck stop stud marketed as a club beer. If it's the same price as other 25 oz cans grab it, the buzz is nice and the sweet taste doesn't burn the tongue

This is a beautiful beer to sit down a get a nice buzz off of. As far as looks go, I drink out of the bottle and the bottle of this bad boy is a beautiful dark blue. This smells like your average American lager but I will say it has a bit more of a bold taste than your regular Miller or Coors Light. This is quite a grainy beer but a smooth and easy-to-drink one, nonetheless. Finally, the feel is one of the best for an American lager. With the 6% ABV, as I said, you get an incredible buzz off a few while barely noticing you are finishing them off!

It taste like a larger VERY similar to regular BL. I would suggest you just by BL instead.

I used to drink a lot more beer, for the effects, and sometimes I would drink this. Cheap, and enough alcohol that two 24oz cans will give you a decent buzz. I guess that would be the positive part of the review. I just tried it for the first time in a while. Bought a 24oz can. Poured into a beer stein. Watery yellow, with a large head that disappears almost immediately. It smells kind of like corn syrup and rubbing alcohol. The taste is like a hint of beer, and it's quite fizzy.

You know what? This is beer-flavored hard seltzer!

I have to say that I was surprised at how decent this beer is. Is it awesome..no. But it is not bad at all. Nothing really special about the taste but it is quite drinkable. Not heavy at all considering the 6% ALC.

Not super good, but it's drinkable. Very sweet going in, with a noticeable aftertaste that is even sweeter and kind of...off. Not a snob so I'll just say this. If i'm just wanting a few drinks of something that tastes good this will not be my go to. But if I am wanting to get beer drunk throughout an entire day, the 6% is very appealing with at least a tolerable flavor. 4/5 because its not the best flavor wise but hey, 6% is 50% more alcohol than 4%. It gets the job done if you want it to.
I guess to match the forum -
Look: ?? i just drink it? I dont care what it looks like
Smell: Beer. Just your standard cheap beer.
Taste: Sweet (for a beer). I hate sweetness and literally almost vomit after eating cake. But it doesnt taste like sugar like others have stated.
Feel: Like beer. Really, almost everything about this is pretty standard.
Overall: Guess that's what my first paragraph was about. If you're that worried just spend 14 bucks for a 12 pack and find out.

Taste: Cereal, mostly corn flakes and cheerios. Some lightly toasted bread. It tastes more malty than regular bud light, with less off-metallic and sour flavors. Red apple and pear in the background, coming in only briefly after the initial breadyness fades out. Ends on a clean, but somewhat tiresome flavor of white sugar.

Feel: Sticky. Medium body, Medium carbonation. If this was less syrupy it'd be a lot better, the sugar really comes through on the mouthfeel to make it feel a lot heavier than it needs to be. Borderline unctuous.

Overall: This isn't bad, but it's very sugary. I don't know if I'd buy this over bud light, mostly because of the body. Part of the appeal of BL is being able to crush multiple cans back to back. The mouthfeel on this is just slightly too sticky and sugary to be sessionable, but to it's credit it does have a better flavor, it's just not as "crisp" or refreshing. This would pair well with food like burgers and hot dogs, or really anything off the grill in the summer, although on it's own it's a little overbearingly sweet.

I didn’t have a whole lot of confidence going in on this one. Good thing too. Poured from a 12 oz bottle:

Appearance isn’t bad. It pours a VERY light straw color with a bubbly white head that sticks around for a little while, at least around the circumference of the glass. Lots of carbonation bubbles. Not exceptional but not bad.

Smell. Uh oh. The smell was mainly alcohol, maybe a bit of corn, but it was very faint indeed.

Taste... yikes. The bottle says “brewed for the night.” I hope no one ever has as bad of a night as they must have been having when this came to be. It’s a bit sweet right off the bat, but then turns to a watered down argument between booze, corn, and hops, and the booze wins. The beer leaves an almost metallic film on my tongue on the way down.

Feel - the carbonation is nice, and the body is obviously light, but I cannot get over the nasty film in my mouth. Thankfully the beer is chuggable so it can be over quickly and the 6% doesn’t feel like it’s there until later.

Overall - Bud Light is preferable to this in almost any scenario I can imagine. Not good.

*Note*
I had a second bottle, this time while eating Fritos, and that seemed to help with the metallic film. Didn’t make the beer better though, haha.

Oh man this one is rough. When i first saw it I thought it might be pretty good. Boy was I in for a surprise. I won't say its a bad beer but I have never had a beer that tastes less like a beer. Wasn't really sure what I was drinking. Overall not for me.

The beer is a transparent yellow with quickly dissipating head. There isn't much on the nose, vague alcohol notes mostly. The taste is bad. It is full of fusel alcohol and other off flavors, but with an initial sweetness. The feel isn't too watery and has good carbonation. Overall, this reminds me a lot of a malt liquor.

Picked up on a whim while mulching my flower beds. I was a bit leary with it being a bud product, but for a 1.50 I thought I'd give it a try. Looks likes lemoncello with fizz and a small white head, I can read this text through it easily. Smell of corn, strong breads, grass and hay, green bananas, but there is a slight piney, citrusy smell. The Smell may be the best part thus far, but there's also an odd smell that comes in at the back end like puddle water on a hot day. It feels like seltzer, what is this made from? Overall, one or two good or quenching thirst during yard work, but you'll need something to wash your mouth from the odd aftertaste.

Had this from a bottle.
A: pours light yellow body with small white head with no retention or lacing.
S: sweet, corn-like smell
T: tastes like a watered down lager; nothing special
M: light bodied; fairly crisp
O: not a special beer; had it to try it, but won’t be a go to anytime soon.

Beer pours a clear pale yellow color with a small white head. Smell is spice, corn, hops, biscut, and a faint malt scent. Taste is corn, with spice and mild hops taste, and is even thru the mouthful. Beer finishes dry, with a slight aftertaste and medium carbonation.

Beer is very much like a Bud Light Ice, certainly a much better beer than Bud Light. Beer is also a bit lighter than a Budweiser. This is the best tasting light AAL beer by far from the macro brewers. Not a bad beer overall and a good beer for summer.

Pours a lager colour with carbonation bubbles that float well after the pour. No head whatsoever. Smell is rice/adjuncts; taste is fizzy, rice and the typical Bud flavour.

Appearance: Pours a clear, champagne-like golden color with a small white head. SRM of 6. It looks just like the beer does in the commercial. A beauty. (4.25)

Feel: Medium-bodied. Low carbonation. Extremely smooth and long on the palate. Feels milky. Alcohol is hidden well within the body. (3.75)

Overall: A surprisingly good stronger American lager. More alcohol, but also a larger body and milky cereal sweetness to hide the alcohol. Overall, it's a better beer than your typical Bud Light, but it depends what you want. If you want to crush a number of them, this one could be dangerous. On the other hand, if you are wanting a more complex, and flavorful beer... well there's craft beer for that. Not convinced a craft beer drinker would be rushing to pick this up. Still it's a good beer and better than many light beers. (Final Rating: 4.03)

Bud Light Platinum from Anheuser-Busch
Beer rating: 54 out of 100 with 1986 ratings