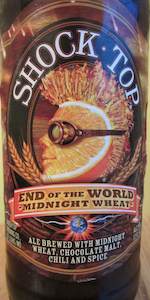 Notes:
View: Beers
Reviews: 78 | Ratings: 439 | Log in to view all ratings and sort
Reviews by Bierwolf:

Appearance: Mahogany hue with a one finger white head. No lacing.

Taste: Like a light brown ale. Malty with the flavor of baker's chocolate. A little watery. Don't really taste any chili.

Mouthfeel: On the lighter side of medium bodied. Average drinkability.

Final Thoughts: High on ingredients and low on flavor. Would I drink this again? No.

Shock Top seasonal wheat beer wasn't what I expected, wasn't as good as some of their other offerings, but it still hit the spot.

The beer poured out as a beautiful dark-honey color, very nice to my eyes. The head was thick, had staying power and with good lacing. I smelled strong scents of barley and malt with a distant hint of spice. It tasted very potent, not the sort of beer to guzzle, but to spin and take in slowly. The mouthfeel helped out with that since it rolled around my tongue thick and rich. What disappointed me was that I could only pull out the barley and malt flavors - none of the spice I smelled or cinnamon the bottle claimed.

Overall, a good beer but nothing overly spectacular.