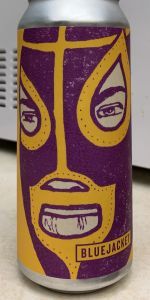 Mexican Radio has a thin, dying-away beige head and a dark brown appearance, with some visible bubbles at the bottom. The aroma is of assorted spices and dark bread crust. There is a similar flavor, with low bitterness and possible pepper heat. Mexican Radio has a rather thin body and a medium-dry finish.

NO can date, this release is 8%abv
Pours inky black dark as night with a med-smaller frothy brown head that fades semi quickly,. a bit of lacing, long legs

NOse brings lots of chocolate, milk chocolate, dark, layered, with some cookie biscuit notes into a malted milk ball, then the lactose, fair amount of it into a chocolate milk character, some spice notes and cinnamon, a bit of roasted coffee, and some sweet caramel, with a hint of vanilla

Taste is also rich, layers of chocolate, cocoa, milk chocolate, a little ganache like, again toasted cookie dough into malted milk ball character, some caramel and sweetness, creamy milky lactose again, fair amount, with raw vanilla and vanilla ice cream, mild baking spices, then fair amount of cinnamon and pepper heat, a bit of dark fruit in the middle, and a bit of roasted coffee, pepper and cinnamon heat really increases as it goes, with a light alcohol warmth, chocolate milk, with a touch of bitterness kicking in late, and lingering pepper heat and cinnamon and spice flavors

Overall I do like Mexican Stouts and this was pretty nice, I think the lactose went overboard and was too milky, but the layers of chocolate, cinnamon and pepper spice and heat were quite nice

16 ounce can, no dating on it that I noticed. Thanks to my buddy Denis for picking this up for me on a recent trip to DC! Served in a snifter, the beer pours dark brown/black with about a half inch tan head that didn't stay around for too long. There's a small amount of lacing. Aroma is nice, the brew smells like roasted malt, coffee, cocoa, cinnamon and some chile peppers. Taste pretty much follows the aroma, all the flavors are well balanced with each other and the chile pepper heat is subtle but gets a little stronger as the beer warms. Really tasty! Mouthfeel/body is medium, it's slick and smooth with a moderate amount of carbonation. I liked this, certainly would like to try it again in the future!

No canned on date. Served in a mead glass.

A: Dark chestnut brown with short-lived dark beige head with no lacing.

S: Aroma is light and subdued with chocolate, coffee, and dark fruit with vanilla

T: This beer picks up steam with the flavor a luxurious melange of milk chocolate, cocoa, cinnamon, vanilla, and light cherry note on the finish. The chiles creep in and about halfway through the can, they add some zip and extra interest to an already excellent stout. Low bitterness, enhanced by a subtle roast note, and sweet but very drinkable.

M: Feel is smooth and silky with low carbonation and full body without being heavy.

O: Exceptional beer that would really hit every area and really put it in the upper echelon of spiced adjunct stouts.

Served in a snifter at the brewery, just a ring of lacing by the time it arrived. Dark brown, near black color. Pretty thick body, light carbonation. Very similar to Mexican Hot Chocolate. Good chocolate flavor, not too strong. Smells like cocoa with tiny hint of chile. Heat of chiles is pretty mild it present. Up there with some of the chocolate/chile Prairie Ales.

L: Had this on-tap at The Answer Brewpub, poured into a snifter glass. Had a dark brown / black color and a thick, opaque consistency. There was a quarter inch of foamy, tan-colored, fairly long-lasting head. Average lacing.

T: Tasted of a hint of vanilla (very fleeting), some chocolate (always welcome), a bit of spices (cinnamon), some chili peppers (milder than I thought) a hint of the creamy quality, and a fair shot of malt. A surprisingly well-balanced, focused flavor. It's not as spicy as some chili-infused stouts, but still has a nice kick to it. Tasty.

F: A fair amount of carbonation with a smooth, warm finish. Medium-bodied.

O: A subtle and balanced stout. Worth a look.

One of the nicer Mexican hot chocolate stouts I've had that feels like something I could drink regularly. Instead of going all-out and overboard with either the cinnamon or the chiles, this is extremely approachable and restrained, exhibiting a pleasant balance between the various components. Moderately thin for the ABV and in comparison to other similar beers, however.

Poured a black body with minimal head and the aroma is mostly spicy with heat although some chocolate comes through. Like the aroma I get more spice/heat than anything and this is more of a chili beer than a milk stout to me; there is a lactic smoothness and some chocolate sweetness but the heat from the chilies is the dominant flavor and I wish it was dialed back a touch.

A dark beer with a slight bit of spice but not over powering. A creamy stout with balance. Overall a solid beer a wish played to the wished more.

black body with thin head that drops down to a thin ring. Well all the adjuncts are present in aroma and taste. The beer smells of earthy smoky ancho peppers, milk chocolate, vanilla, and cinnamon. Taste is the same with an awesome balance of the adjuncts. A medium bodied stout with low carbonation. Extremely smooth and this beer drinks very consistently from cellar temperature to room temperature; the beer does not get boozey at all and the aroma and flavor consistently do not change either. This beer is just as good as Prairie bomb, Abraxas, and Hunahpu. Only difference is that Hunahpu is as thick as motor oil and is slightly boozier as it warms and Abraxas is slightly thicker than Mexican Radio, but is also slightly boozier too. I would say that this is slightly thicker than prairie bomb thou. This beer is flying under the radar for sure.