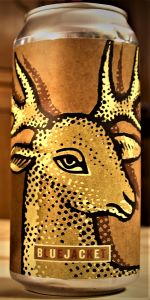 APPEARANCE: Black with a dark tan head. Looks nice for the style.

AROMA: Heavy on peanut butter powder (think PB2 if you're American) with a splash of cacao nibs. Not entirely authentic, but it's less artificial than most peanut butter stouts I've encountered....at least aromatically.

TASTE & TEXTURE: Shallow, which is to say I'm happy it's not a cloying chore to drink. The high but not over-the-top sweetness hides all its alcohol, and peanut butter powder is right at the fore without coming off too artificial. I get zero vanilla bean in this, but at least it's not evocative of Mexican imitation vanilla extract like some "vanilla" stouts. Lactose sweetness is evident, and probably the worst part of this beer since it adds so little. I can't say I pick up on any cocoa nibs...the peanut butter powder just drowns out everything else, even the beer's malt backbone (which I'm presuming is all dark and chocolate malt with maybe a hint of carafa).

OVERALL: A one-note milk stout hitting on peanut butter powder and milk sugar but little else, which is effective in disguising the beer's otherwise concomitant alcohol presence but doesn't exactly make for a tasty milk stout. Simple, shallow, narrow, boring.

Nose brings lots of peanut butter up front, toasted peanuts, a little sweet milk chocolate and candy bar notes, as well as a little cocoa and fudge notes, a hint of vanilla, and light roast

Taste brings more peanut butter up front but not as much as the nose, creamy milk chocolate right up there with it as well as lactose, a bit of cocoa turning to thick cocoa almost fudgey, a bit of vanilla, fair sweetness and again the candy bar like characters, a touch of bitterness, and a little coffee notes, mild sticky sweet finish but fairly dry with more dried lactose, milk chocolate, and peanut butter

Overall solid beer, the nose was loaded with peanut butter, thankfully the taste was not and all the flavors played well, as I've come to expect from Bluejacket

color is a cola brown with fizzy tan foam

smell is Peanut Butter, baker's chocolate, vanilla and a drop of caramel