I'll Have What She's Having
Evil Genius Beer Company 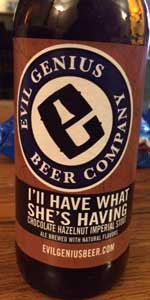 Pours a deep brown, minimal off white foam. Smells strongly of hazelnut, hint of cocoa, vanilla. Tastes sweet malts forward, hints of hazelnut, cocoa, vanilla - sweet notes dominate. Mouthfeel is very thin for a stout - minimal effervescence and a bit cloying with its off balanced sweetness.
Overall, a very good desert beer - a bit of a novelty - I would have a lot of trouble drinking more than one - pleasant, I wish it had more stout qualities - the texture in particular seemed too thin.

T: [4.75] Wow I get a lot of the hazelnut and it was not on the nose. It is nutty and flavorful and takes the front seat on the flavor. After the hazelnut I am getting the nice vanilla notes. I get some bitter chocolate late.

M: [4.25] Smooth and creamy with no hint of the 9.4% alcohol. There is some mild bitterness on the end that is from hops or a bitter chocolate flavor. Overall really nice body.

O: [4.50] This is a great beer. The flavors are rich and robust. The hazelnut and vanilla flavors really shine through. It tastes fantastic and the body is smooth and nice to drink. This is my first Evil Genius beer but hopefully not my last!

Evil Genius needs to figure out why almost all of their beers have a metallic after taste... Figure that out theyll have some solid brews.

A nicely rounded nutty aroma with a hint of sweet chocolate. The taste was a balanced sweetness, definitely getting the chocolate and hazelnut flavors. It finishes a little on the metallic /molasses side, which I don't mind, but a wee much. Enjoyed this at home. My sweet hubby, 2019 Christmas - surprised me with this one, and I'm ever so glad he did!

Pours a dark brown color with a small layer of beige head. The nose has notes of sweet chocolate. The flavor is sweet without a doubt but its not really chocolatey. Rather, the flavor is a bit artificial with an unpleasant aftertaste.

Notes via stream of consciousness: Wow, much darker than I though it would be. It's an absolutely opaque black even when held to the light, you don't want to spill this on yourself! The head is a fluffy dark tan. The aroma is chocolatey, nutty, and roasty. What's in here again? Just chocolate and hazel nut, OK. Of course they're not real, it's made with "natural" flavors. Oh boy, that's good. It's definitely a dessert beer. It tastes like rich dark chocolate and then the nuttiness comes out in the finish with some coffee-like roastiness. There's some bitterness there, keeping it from becoming to sweet or cloying. What's the alcohol content on this? 9.4%, that's certainly respectable, and I don't find it at all. To top off the dessert beer aspect of it the body is medium and it's moderately carbonated so as to leave it a bit creamy in the mouth. They've really scored with this one. It's not a beer that I'd drink often, but for what it is it's great. The head has only now dissipated and there's still an island floating in the center, and there's some very nice lacing left behind. Nicely balanced and rounded. Very nice. Well worth trying.

I'll Have What She's Having...but only if it's an imperial stout. Very dark brown--almost black--on the pour, but flashes of ruby light it up at the base. I imagine you'd get the same Hazelnut presence in the nose if you sniffed a bottle of Frangelico. This 9.4% Imperial Stout advertises chocolate and hazelnut, and it delivers on both. Looks like it would be viscous and chewy on the palate, but while pleasant, it isn't in the Ten Fidy ballpark, either. No question that it's a dessert beer, but that high ABV is masked, making it a bit dangerous, unless you're sipping by your own fireside. Not cloyingly sweet, either, but also sweet enough to make you appreciate the bit of bitter finish, probably from some burnt malts, as whatever hops are in there are subdued. Nicely carbonated, too. A nice beer by geniuses at Evil Genius, despite the name, as it would take a special woman to knock a few of these back.

What a weekend! I felt a cold coming on when I returned home on Friday and so I decided to ensconce myself at Chez Woody to watch hockey and reduce the backlog. This beer came home with me from The Fridge and is an intriguing addition to the weekend.

Having Pop!ped the cap, I decided to again see what I might net with an aggro pour. Once more, I had to back off, but the net result was a finger-and-a-half of dense, rocky, deep-tan head with great retention. Color was likewise easy - Black/Opaque (SRM = 44) since there was precisely ZERO light penetration. Nose smelled like hazelnut coffee. I am a huge fan of coffee, having retired as a U.S. Navy sailor over sixteen years ago, but flavored coffees do not do it for me, except blended with regular coffee. Just sayin'. Mouthfeel was thick, full, creamy, like a big dollop on my tongue! Jesus, this plus 9.4%. I may have to give up sooner than I had intended. The taste was like a Cadbury Fruit & Nut bar in that it was chocolaty, nutty and even with some notes of dried, dark fruits. Mmm. If I keep up like this, they are going to revoke my Hophead status! The lacing that was beginning to appear was going to require a jackhammer to remove. Finish was semi-sweet and the brewers should be applauded for keeping this in check. It could have been wildly over the top and totally undrinkable, but it was really good. That said, it was more of a one-and-done for me, probably better suited as a dessert beer.

T/F: Rich sweet roasted malts and grains... good notes of espresso and hazelnut... some cocoa mixed in. Some mild hop bitterness as well as bitterness from the roast. Medium bodied... lighter than expected and mostly smooth. Mild carbonation, and finish is sticky/sweet.

O: A big sweet Imperial Stout.... good melange of flavors and a tad on the sweet side. An able dessert beer but not tops for the style.

Thanks to Liz and Tim for bringing this to our Pi party.

Pours a dark black with cola-brown around the edges. Just a thin film of dirty brown on top.

Smells Hershey's syrup sweet with a slight air of booze. It doesn't smell fake or anything, but it's far too dominant. I can't really pull anything beer-y out of this. Not bad, but not beer.

Taste is far better. The chocolate is there, but it's nestled quite snugly in a sea of a pretty solid stout. There's a smooth sticky barley, but my favorite here is a a crisp, pungent hop at the end of this that dries the mouth out. Without the chocolate, this would be a disaster, but the way this hop presence is an end of the line for the sugary sweet chocolate is commendably well done.

Feels bold and full, with a decent density and a gentle swarm of bubbles. The dryness from the flavor cleans this out really well, leaving the taste buds dry as heck, but with a slight film on my tongue.

Overall, I have to rate this lower than I want to as this, I think, is really context specific. Maybe have with some ice cream, or brownies. A neat beer and worth a try.

Poured into a nonic pint glass: color is solid black, head is tan, presents about 1/2 inch thick and then dissipates to a solid top with some lacing on the glass.
Smell is cocoa and solid nuttiness, definitely a hazelnut like note, some lighter bitter roasted malt notes.

Pours jet black with a half finger of off white foam. Aroma is strong with an artificial hazelnut flavor. First sip is a rush of artificial sweet flavor, with a roasty finish. The flavor is dominated by hazelnut syrup, like what one might add to a coffee drink.

This one is a miss for me. The flavor isn't natural or particularly appealing. Body is on the thin side.

F- taste mimics nose....very sweet on the chocolate...almost like cocoa

M- thick yet creamy and smooth. Very nice complement of flavors. i like it!

O- well worth it and will always get it again.

Poured a brown body with offwhite head that quickly died and left little lace. Aroma is mainly hazelnut/nutty with little else. Medium-bodied beer that is not bad although a bit one note; I like the dryness of the beer balancing with nutty sweetness and the one I had (don't know if I could drink more than a couple) was enjoyable.

The beer pours out into a Duvel glass a dark brown that is almost back and creates a 1/2" dark tan head that soon recedes to a ring of foam, and irregular island and a thin film of foam on the surface. What foam and legs of lacing clinging to the glass seem closer to the liquid than when the head began to recede. Sipping creates lots of scattered pieces of foam that mostly cling to the sides. Mid-way through the beer there's still a foam island on the surface and some large and small patches of foam clinging to the sides.

The aromas are exactly what they should be for a Chocolate Hazelnut Stout, an appealing blend that reminds of both chocolate and hazelnut.

The flavors are as expected from the nose with the chocolate and hazelnut blending nicely but still identifiable. Pulling them together there is some sweetness that doesn't quite conceal the bitterness that shows up at the end. It is hard to be sure whether than bitterness comes from the dark roast malt or the hops or both.

The mouthfeel seems a bit on the light side of medium bodied and is creamy smooth with the moderate but persistent carbonation. The finish begins as the sweetness fades some increasing the prominence of the dark chocolate and hazelnut combination before they begin to recede and leave behind some dryness but no real bitterness to speak of in the back of the palate.

This is a beer I'll be looking to have again as a treat and change of pace when I'm in the mood for the chocolate/hazelnut combination. That said I doubt I'd be wanting to bottles in the same evening. Since the brewery headquarters are pretty close to local, I'm encouraged that they may do well enough to step up the game in brewing their beers if they suceed in establishing their own physical brewey rather than brewing in someone else's physical plant.

Pours clear, dark brown in color with 1/4 in head. Taste is caramel, dark chocolate, and hazelnut. Medium bodied, sweet, with low carbonation. One of the better Evil Genius brews I have had. Makes for an excellent dessert beer.