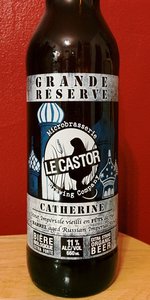 Pitch black with a hint of amber when held to the light. Topped with a fast dissipating, deep beige foam.

Smells fruity of prunes and plums, boozy as well. Oak aged barrel quality too. The deeper notes of chocolate are covered by the other qualities I've mentioned.

The oaken wooden quality of the barrel age come to the forefront again, as well as the fruity plum and liquorice blossom. Chocolate, coco and black liquorice are there too. There is a hint of sour crispness, and a deep bitter char which is very much in the background, almost undetected. Its a very pleasant flavour forward kind of brew. I get hints of white wine in there too.

Got this at Brew Ha Ha in Gatineau, Quebec. Drinking it Dec 28th in New Hamburg, ON. Excellent, smooth drinking brew. I would have held on to it longer but the cap didn't survive my long voyage, so I don't want it to spoil.

Pours an impenetrable tarry black, without any highlights at all but, maybe, a sinister caramel aura. A scant finger of brown head has subsided in less time than it took me to type 'head has subsided,' leaving a timid little ring of foam around the edge and a couple of insignificant little spots of lace.

Smell... the cap wasn't even half off the bottle before the room was infused with the boozy, tropical smell of dark rum, smells like February vacation in the Caribbean - which probably says more about how I spend my vacations than it says about the beer itself. Thick, sweet, dark, golden rum, jungle flowers and vanilla, and a little cat pee.

...let me just take a moment to note that I am two-thirds through my first glass and half in the bag already. But I'll do my best...

Feel: Drinks like a barleywine, thick-bodied, fat and sticky, but with just barely enough carbonation to keep it from being syrupy.

Overall... well, overall I wish that I had eaten something before I drank this entire bottle because I am now completely fucked as far as getting anything else done today. Where was I? Oh, right... I probably should have left this in the basement for another year but, hey, I could die tomorrow, right? Actually, right now would be good because I am pretty much totally anesthetized.

Bottle: Poured a pitch-black color stout with a medium size brown foamy head with OK retention. Aroma of roasted malt, black chocolate and boozy rum notes is interesting. Taste is a mix of light roasted malt with quite a bit of residual sugar notes with some boozy rum notes and some creamy black chocolate notes also perceptible. Body is full with nice oily texture and medium carbonation with some alcohol notes easily detectable. Not bad but rum is bit more dominant then I would have like it to be.

Wow, This beer kicks you... I've had it out now for half an hour and im done 6 oz. you really need to ease into it as the flavors and alcohol are strong and it really kicks you. One you ease in though, what a beer.

Appearance - Poured from a 660 ml bottle into a 12 oz tulip, the pour was black with very little head, maybe slightly less than a finger.

Aroma - Wood and rum were the absolute first things to hit my nose. followed up quickly by a strong dark chocolate, coffee, dark fruit like plum and licorice. This one is really fun picking apart the nose as the smells are so strong.

Overall - This is an absolutely fantastic stout, The high abv really does show its light but not in a way you'd mind, It provides a warmth not unlike a spirit on a cold winter day. The flavors mesh beautifully and the feel really works. If you can get your hands on this your in for a real treat.

Pours a thick-looking black with barely any head at all. The smell is very woody with the rum being really prominent before it warms up to near room temp. Rum, burnt wood, super roasty malts, vanilla, layers of toffee sweetness and alcohol warmth,dark fruits and some red wine-like astringency. This is a big, boozy beast but it is good once it warms. The only thing I wasn't too into about it is that the barrel seemed really, really prominent. I kind of had to ease my way into it and once I was accustomed to the strong flavors at play it was better, mellower, and smoother. I think if that aspect was toned down a bit I would go a quarter point higher on everything. We'll have to see. I'm hoping that a year or so of cellaring will smooth off the rumminess a little. Would have again. She packs a wollop!

Had the great chance of finding an ultra fresh bottle (bottled Nov 2 2015). It says on the bottle that a year of two of ageing would let it develop further but from experience, the hops loose a lot of their aroma with time. So being a true hop head, I drank this on Nov 9 2015.

L: Pours a very dark brown/black colour with one finger of tan head. Not much retention and lacing.

T: Lots of toffee, anis, licorice, coffee and some chocolate. Very potent but extremely well balanced between the hops (bitterness) and the malts (sweetness).

F: Medium bodied with some carbonation. A little boosy but great.

O: This beer is a winner and I strongly recommend it to those who don't mind a very potent beer. I will definitely buy it again if I come across it.

A: Pours black/deep brown without much head and the little there was didn't stick for long. The beer looks decent but nothing much. This is usually the case with barrel aged beers.

S: You definitely get the bourbon notes right off the bat: vanilla, leather, pepper, marshmallows and alcohol. You get also notes of dark chocolate, coffee and dark fruits, the usual for this type of beer. The overall smell is really light though.

T: Extremely drinkable for 11ABV and you definitely don't taste the alcohol much, if at all. The beer is extremely well balanced between roasted bitterness and sweetness, even when the beer doesn't feel heavy at all. You get the chocolate, the coffee, the marshmallows and all of the good bourbon qualities.

M: Quite light actually. Usually it's an issue for that imperial stouts are lighter body, but it somehow fits the beer really well. Very sticky though.

O: This is a very solid beer that I have no problem recommending any day. Great stuff, extremely drinkable for 11 ABV.


Catherine (Grande Réserve) from Microbrasserie Le Castor
Beer rating: 90 out of 100 with 19 ratings