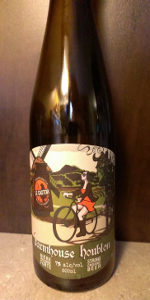 Farmhouse Houblon has a label depicting a woman bicycling through a green, rolling countryside on a warm, sunny day - the contents of the bottle look as though they were designed for exactly that activity. Bright, light, clear and well carbonated, this thing is refreshing just to look at!

Ahh yea, that's the stuff. I'll confess an amount of personal bias for this (Orval-like) combination of floral, grassy-green hops and funky, farmhouse Brett - this aroma has it featured on the main stage. Each element is championed equally; it beautifully blends fresh flower blossoms with tart festering fruits.

One can taste the grain, hops and yeast in and of themselves, but it's the bready, fruity, floral and funky nuances they impart that are truly appreciated. It's amazing to think these tastes of passionfruit, peach nectar, lawn clippings, roses, straw, wool and leather all trace back to those basic three ingredients...

Fermentation is a truly magical thing. Bubbles sparkle on the palate, scrubbing it free of that earthy hop bitterness and every drop of the 6.3% alcohol. Frankly, combined with the tartness, it can be a bit piercing at times and rushes the flavours out rather quickly. Still, there's fireworks in this mouthfeel.

Farmhouse Houblon - half the name is in English, the other French. It's appropriate for a beer that's part bitter, hop-forward, experimental American-inspired ale and part rustic, classic, true-to-form Old World Saison. Le Castor has ensured the best of each without compromising either. Great beer.

This beer pours a mostly clear, medium golden yellow colour, with two fingers of puffy, loosely foamy, and fizzy off-white head, which leaves a bit of isolated sudsy island chain lace in places around the glass as it evenly subsides.

The bubbles are fairly restrained in their ennui-stricken frothiness, the body a so-so middleweight, and sort of smooth, as the funk and hop contingent takes its foot off of the gas for the moment. It finishes trending dry, that same twin axe attack of hop 'n funk steering us according to their whims.

Overall, this is a very well-made hoppy and funky farmhouse ale, the two disparate essences somehow coalescing into a singular flavour force (yeah). Hmmmm, a cheese plate does sound like a good idea right now, even if I haven't exactly put in a long, hard day, as such.

A slight haze in a bright yellow body, bubbles pop up everywhere but slowly, a thumbs width of foam falls to a thin film leaving a fair amount of random lace

S more funk then I was expecting, cheesy, gym sock, spicy yeast? ,maybe the rye malt? still has some citrus and grassy hops, bubblegum, hard to place tropical notes and the funk sets in before you figure it out

T the funky farmhouse comes out even more but there's still a fair amount of hops rounding things out, neither really dominate, I think I caught this one at its awkward age in between stages

M lighter side of medium, a little foamy but somewhat expected from the style, just a little grit , yeasty finish lingers

O nice mix of hops and yeast, my glass is almost gone at this point so you could say its drinkable for sure

Solid funky version of the style, I liked it start to finish and its one of those beers you want super fresh and again well aged

Thanks to Marc for the bottle!

This is a fine Saison. It is rusty but not that much that it makes you think of rusty nails. It is dry as it should be towards the finish but there is also a malty sweetness. The real finish is hoppy, which is a nice twist once you get accustomed to it. The sweetness is also in the aroma and surrounded by some belgian type esters and phenols. Well balanced for such a extreme style.

Pours a nice hazy yellow body with an airy white head. Bit of saison funk, overripe melon and some lemon. Hops have faded obviously but still a nice, tasty ale.


A:
Pours a cloudy white gold that reminds you of clover. Big, heathy, creamy 3+ finger dollop of beige head that settles to globs, but is easily roused. Very good retention; speckled lacing. (4.25)

T:
Dusty fruit juice. Muted presence of everything in the nose, dusty and musty mango and lychee, some bright herbals. (4.25)

O:
Great saison.
This is a fine, bright beer that is utterly wholesome and utterly refreshing at once. Bright tropical fruit aromas takes you in and a round, dryly bitter, earthy lychee pulp flavor shows you out.
Very drinkable. Nice soft feel and imperceptible finish.
I am actually going to go get more tomorrow to see how it tastes in a couple months when the brett's more present and the hops are a little more muted. Well worth trying. (4.25)

Pours a bright yellow gold with a foamy billowing head. Looks gorgeous in the glass. Aroma has some tropical fruit on top of some grainy notes. Flavour is grainy, funky, somewhat barnyard like. Hops come through nicely and complement the farmhouse theme. Feel is prickly and medium dry. Overall, well balanced wonderful saison