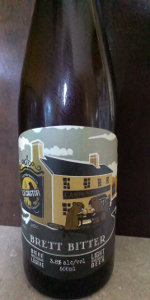 Hazy, effervescent golden yellow. Not really amber at all. Frothy off-white head, plenty of lacing. Very attractive in the glass. Aroma is faintly hoppy with a mild funkiness, an almost leathery scent, with some less appealing sweaty undertones.

Flavor is smooth, initially a pleasantly bitter hoppy taste tinged with a familiar Brettanomyces-driven earthy funk, slightly woody tasting. Finish is nice and malty, almost creamy. Mouthfeel is surprisingly good, given the 3.8% ABV. Like Au Fut's Brett Porter, this is the kind of beer I'm surprised I don't see more often -- a sort of British-inspired wild ale. It's also neat from a historical perspective, since I can only imagine what beers tasted like in 19th century Britain.

I have to agree with several of the points The Doctor made earlier -- resemblance to Orval, more interesting offerings available for the same price, not really wanting to drink several of these in one sitting (as one might with other session-gravity beers). All in all, not my favourite Le Castor offering, but a pretty good one nonetheless.

It's between blonde and amber color-wise with lots of big carbonation bubbles and a small head that stays for a long time. Nice wild smell, really funky and woody. Tastes really good, you get a sweet side from the malts with a little bitterness from the hops and a full lot of flavor from the wild yeast. Nice carbonation in the mouth and at 3,8% ABV it's really a good session beer.

The aroma is mainly Brett, which I like. A telltale medicinal, tart cherry scent, a bit funky. Some caramel as well, but more subdued. Flavour is not as good. The Brett is there, but the whole package is a bit thin. The base beer is a bit light to provide much of a foil for the Brett. However, the flavour that is there is nice, just too light. I expect that if this beer was presented without the Brett, I wouldn't much care for it.

A:
Pours a cloudy golden-tan (Orval-esque) with a huge, luscious beige head that is built like a rock only ever dropping to near a finger thick. Awesome retention; scummy foam insulation lacing. (4.75)

T:
Slightly yeasty with a tinge of hops and little to no tart taste, bready dough, some yeast character, hard water. (3.75)

O:
This is a tasty enough beer made around an interesting idea if not something more substantive than that.

It pours beautifully with as close to a perfect head as it gets. It looks like you're pouring whipped cream into your glass. The nose and flavor are complimentary, but it smells more tart than it is (it isn't). All in all it is drinkable cause it is simple. However, it is so simple that it doesn't exactly make you crave pounding a bunch of them. That is certainly not to say it is a bad beer, but for the price I would like something a bit 'fuller' a bit more varied flavor-wise and maybe even something a touch stronger.
Overall good. Give it a shot if you see it, but you can get better beers with higher ABV, richer flavor profiles and more solid gimmicks than "this is what a cask of forgotten bitter maybe would have tasted like" for the same price. (3.75)

Pours a hazy copper with a thick, full head that dissipates very slowly leaving lovely lacing in its wake. Mild "horse-blanket" funk, grass and pear aromas. Welcome hop bitterness with mild brett funk. Medium body with medium carbonation. A great English Bitter that is made better by the brett. This is a beer that I could drink regularly for sure.

Look: poured the first glass carefully. Clear gold. Second glass was hazy due to yeast getting poured. Nice thick head. Constant carbonation throughout the drinking experience.
Smell: Pear, apple cider, honey. With a bit of warmth, the barnyard aromas come out, although a bit faint.
Taste: Very similar to the smell with a bit of sour candy.
Feel: Lots of carbonation, finish is a bit short. That's what you get with lower alcohol levels.

Overall: i was expecting more brett, like some Bandols from Provence. Easy drinking with the low ABV. Nice for a grey Sunday afternoon.