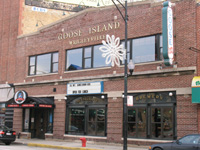 Instead of going to the Braves-Cubs game yesterday (I thought it was going to get rained out) I spent lunch in Wrigleyville and checked out the Goose Island location there.

The place was just about empty except for a number of customers sitting at the bar, but I am sure it gets crowded closer to game times. (While we were there, a big delivery truck with a Matilda advert painted on the sides parked along the street and about 10 kegs were unloaded.) We sat at a table near the window and were given menus and a May beer list, each inserted in a protective sleeve. The beer menu had a number of “Refreshing,” spring-inspired, white and wheat brews. I was tempted by the Cubby Blue (a blueberry ale) but chickened out and safely opted for Honker’s Ale for my first beer, which was served in a 20-ounce imperial pint (considered a normal “glass” unless, I guess, a 16-ounce pint is requested).

Our waitress was friendly and prompt but I did not ask her about any beer. My friends said the pulled pork sandwich was the best they have ever had and the veggie burger was pretty good. Except for a massive amount of salt, the fries were also pretty choice. My friends also said the in-house root beer was excellent, but I stuck to the real beer.

My second beer was a Green Line, another “Session” beer listed on the menu along with Honker’s Ale and En Passant. Among the other styles were “Hoppy,” “Malty,” “Sour,” and “Belgian.” The menu even listed a gluten-free brew. Near the entrance is a kind of hostess desk where glasses and shirts are sold. Before leaving I bought a “Willi” glass, which the brewery is always recommending as ideal glassware.

Though I did not get the full Wrigleyville experience since it was so early, I will definitely visit that Goose Island location in the future.