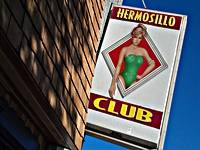 Notes: The Hermosillo is a neighborhood beer and wine bar in Highland Park, Los Angeles. Previously a night club with an infamous reputation, The Hermosillo now serves craft beer, 30 wines by the glass, and creative bar food. Home to the original Highland Park Brewery location (production only), too.

See the HPB Chinatown listing for their beers.

Great place to drink decent beer, eat spectacular food, and people watch, be it inside the bar or by the windows.

Don't forget to tour the brewery in the back! I always play that joke on friends their first time there. Barrel warehouse is the best.

Just around the block from my friend's house, in a very nice neighborhood filled with restaurants and record shops. The exterior is rather unassuming, but inside the place is surprisingly huge and unpretentious. The facade is bricky and tavern-like, the bar is large and well-staffed, there's shuffleboard and one of those games where you swing a cable to try to catch a ring onto a hook, and they were playing the Galaxie 500 Pandora station at a reasonable volume. Basically, it was my kind of place.

The prices were good for the west coast. So was the food. The beer tended toward contemporary styles, with lots of fanciful sours and fruit-forward IPAs, but there was still a good amount of stylistic diversity and everything I tried was very good.

We wound up spending like 4 hours here without meaning to, we were having so much fun. Certainly, my impression was somewhat influenced by the joy of hanging out with old friends, but we also went to several other places and none were as enjoyable as Hermosillo. The staff were super cool, the locals were friendly, and the location was great. The place is a must-visit if you're in the area.

Visited here during their sour beer tap takeover during LA craft beer week. Fairly standard dive bar vibe, especially in the neighborhood it's in. Cool place, with nice servers who are responsive and quick about getting things done. Selection is nice; they had several HPB standards along with a nice selection of CA sours including West Ashley. They also had some Cantillon for on-site drinking as well. Food was good as well, pretty exceptional burger actually. Overall, a nice spot which I enjoyed very much. It was a bit of a pain to get to this place off I-210, though. I will have to visit the Chinatown location next time I am in LA.

this place is top notch. might be the most well rounded brewery in Los Angeles. They always have plenty of styles to offer and their west coast IPAs are the best I've ever had. The service is great, the location is great - if you haven't been yet, do it. do it now.

This is a frustrating review to write, in that I so much want it to be even better than my rating, which is pretty damn high. The vibe is perfect: a historic East side L.A. gentlemen's club, with lots of room for sitting and standing, and beer and food copiously flowing. There's a bartender who started calling me by name after my very first time going, and always remembers, no matter how long it's been since my last visit. And the (HPB) beer has steadily improved since they started brewing, to the point where it's probably in the top two L.A. proper breweries. My dings against quality and selection might seem minor, but they're important enough that I end up not going quite as much as I might otherwise.

First, taplist-wise, there's sometimes a strange imbalance between styles; I've been more than once when the majority of beers were saisons/wilds, which I appreciate, but which I rarely eat with pub food. Other times, there are barely any hoppy beers, or some preponderance of beers that I'm really not that into. I think they could learn from Cellarmaker in SF, a brewer that really keeps a balanced, intriguing list at all times. Second, the food: much of it is quite good, but there seems to be a conscious effect to avoid anything resembling "traditional" pub food, and when it comes close, it's either weirdly oversized or undersized. The grilled cheese sandwich could feed a family of four, and the papas nachos (which are awesome) are only served as a "snack size," when they could easily be a bigger entree. Again, I'm comparing to another brewery with food, Tired Hands, which has this aspect nailed. On the one hand, they have the "house-cured charcuterie plates," but they've also got a simple goddamn burger with fries. (BTW, TH also nails the balanced taplist thing.)

If it seems like I'm being hard on the Hermosilio, it's only because they're *this* close to being truly, not almost, great. Balance that taplist and offer more basic grub on the food menu, and I'll be there once a week, instead of once a month.