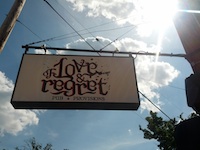 View: Place Reviews
Reviews: 22 | Ratings: 46 | Log in to view all ratings and sort
Reviews by yourefragile:

Went to dinner with my long-suffering bride. Every so often I pick a winner, and I believe this was one of them. A very cozy, intimate, TINY, dimly-lit neighborhood bar with a great beer selection (although heavily skewed toward Stillwater offerings), a fantastic wine selection (read: happy wife), and incredibly good food. Yes, everything is pricey but you only go around once, so get over it. I had their crab cake sandwich (had to do it: it's Baltimore); she had their "Sweet Potato Noodle Stir Fry Dinner", which filled you up but made you feel relatively virtuous for eating healthy. Both were outstanding.
Staff were attentive, courteous, and informative, offering beer and wine suggestions that turned out to be spot on.
The decor is brick, old wood, tin ceiling, and (interestingly) linoleum floor - not particularly elegant, but comfy. Clientele was mostly slightly scruffy but evidently well-to-do Millennials (otherwise they couldn't afford to come here).
It's located in the Brewer's Hill section of Baltimore, east of Fells Point and Little Italy and right across the street from the former Natty Bo brewery. (No, you won't find any National Bohemian at OLAR.) A very classy, redeveloped neighborhood that is well-lit, well-policed, and apparently quite safe.
All in all, highly recommended.

Finally got to OLAR! After years of waiting it was worth it. The selection of beers were extensive, the tap list was nice and there was an even long vintage bottle/can selection too. The prices were a little on the high side for some things but when in the city I understand. The service was attentive and nice. The food was incredible. The smoked grilled meatballs were outstanding, I can't praise them enough! I liked the vibe of the pace a lot, dimly lit no TV's just very low key and chill with candles lit. I'd stop back when in the area.

DoubleDaisyCutter from District of Columbia

This is one of my go-to places in Baltimore. Every week I am in town, I come here once. They have around 20 taps with some of their own stuff, some collab stuff, and some random breweries that are awesome as well. The bartenders treat you well and will help walk you through the drink menu, the beer menu, and the food menu. If you're a wino, they have the gas corking system that allows you to have one glass without buying the whole bottle.

For the beer, they allow half pours, which is nice when you are wanting to try a lot of their offerings. In addition, if you talk with the barstaff, they have an outstanding cellar with killer beers and vintages. Yes things carry a price, but you have to expect that when you're drinking a rare 2008 brew.

It baffles my mind when people see a place that is high quality and then bitch about the price. I realize some restaurants underprice their food, but I have no problem paying a little extra for food that is done this well.

get the Pork Shank.

Don't really know what's going on here. If you type "Stillwater Artisanal" into Google maps, it will send you here. But Stillwater is a gypsy brewer and so, by definition, doesn't have a full-on brewpub. So this is kind of like one of the Mikkeller and Friends locations, I guess.

The place is right across the street from the old National Bohemian campus, in the basement of a very old and bricky building that oozes charm. The decor is original if not entirely distinctive, the lights are warm and low, and the vibe in general is hip but welcoming.

They had about a dozen taps and a dozen bottles and a vast majority were either made by Stillwater or a Stillwater collaboration. They had a couple of other rare-ish beers from regional breweries and 4-5 ciders on tap, along with a large array of good, weird whiskeys and liquors. If you're a fan of old timey apertifs, you're in luck.

And if you're a fan of beer, you're in luck. Stillwater suffers from the same problem that drags down the scores of Mikkeler beers: the quality if somewhat inconsistent, yes, but also the prices of the beers is very high, and so often they'll sit on shelves for months or even years, and then when some sucker (me) comes along and shills out 4 bucks for a 12 ounce can, he gets kind of pissed because it's past its prime. Also, finally, while Mikkeller and Stillwater are both inventive, neither chases after the preferred style-of-the-moment of the American beer scene.

But here, inside a nice bar, the prices aren't as obscene as they are in a grocery (still kind of pricey for what are essentially house beers, though). And you're more or less guaranteed freshness, along with a friendly and knowledgeable description of what each beer is going for. The beer selection is vast and inventive and so if you have enough money you'll walk away very satisfied.

And that's really the only rub I got against the place: the price. I know it's a different area and going for a different vibe and an entirely different business model, but compare it to the Three Floyds Pub, where you still get a 20 ounce pour of most house beers for 6 bucks or less. Here, 10-12 ounce pours run from 7-10 bucks.

OFAR is a fancier thing for fancier people, and while it's well executed in that regard, it's still not *quite* my thing, even though I enjoyed myself very much. It's nice, is what I'm getting at, but its location and pricing put it out of most people's reach.

I lived in Baltimore for a bit and loved it, and it is always amazing to go back and witness all the new bars and restaurants and general beautification of the city. Of Love and Regret is one of them.

Super cool place, tight and smart. Packed on a Saturday night but they have a second floor that is a lot emptier and nicer. Plus they have a little bottle shop up there too!

Let me tell you about the food- small and pricey plates but so incredibly good. Not your average bacon-wrapped dates, perfect Icelandic cod fritters (with the fluffiest batter ever), cheese balls… bar food, elevated. So good.

I had a Freigest Gose Atlantis (with seaweed) ) and a Stillwater/O.L.A.R. Cuvee 1 (golden ale aged in red wine barrel with wild yeast and pineapple).

The 27 taps are all rare and beautiful, including meads like the Mankana Coffee mead I had (from South Africa). 12 Stillwater handles, 5 Freigeist, 3 Monarchy and some ciders.

Stopped here from brunch while in Baltimore for the weekend. Place is a perfect blend of hipster, artistic, and craft centric. Music plays softly to allow good conversation. They have a chalkboard and menu listing 20 taps of Stillwater selections with a couple guest taps. The staff was no only very attentive; they know their beer and made suggestions. The pours were all in appropriate glassware. I went with a stout that was a collab with a Spanish brewery, as well as a Jester King\Stillwater saison. Both were outstanding. To eat, my wife and I picked the Venetian Eggs Benedict. The menu is eclectic, though really good. Can't imagine someone not enjoying a meal here. Afterward we checked out the shop upstairs and I got some bottles for the trip home.

Might be one of the best places I've ever gone for a beer. Perfect to bring a non-beer lover as the food and other drink options looked solid. For craft drinkers, this represented the artistic side of the industry. A tad pricey but well worth it for the experience.

Stopped in after viewing Brewmore Baltimore where the brewer for Stillwater Brewing and owner of OLRPP was highlighted. I've know some of his beers for years and finally had the opportunity to stop in. The outside is nondescript but as soon as you walk in you know its a great beer bar. The beers were awesome and the selection was a combination of Stillwater beers and some guest taps — all great. I didn't have any food but from what I could see and from conversations with others there, everything is done first class. Definitely due another stop (ok, many more). Yup, if I lived within walking distance I would have a great problem.

I visited Love and Regret for the first time while on a business trip and ended up there nearly every evening. I absolutely love this place! The bartenders are friendly and super knowledgeable about beer. The place is really relaxed, and the quality of beer is amazing.

The bartenders are both very passionate about the beer and the food. And they should be, as everything here is fantastic. My wife and I go here about 2-3 times a month for brunch on Saturdays and Sundays. The brunch menu is fantastic. The menu is limited, so you know everything on it will be incredible. A few things on the menu will change now and then. Weekly burger special and steak & eggs special. Typically have 15-17 Stillwater beers and another 10 or so guest beers. Small "bottle shop" area on 2nd floor.

The people behind this place have put forth some effort. I'll agree that it's expensive, so I don't get there as often as some other beer spots. Burgers are still a decent value as they are epic with adventurous toppings. Beer taps are half Stillwater, half quality guest beers. No crap here. The bartender was really into his craft and educational when things were quiet. Recommended, for sure.

Food exceptional quality for bar style. Beer selection will bring out the adventurer in you I promise. Location is on the small side, as most places in the area tend to be. Get there early and enjoy what the creators behind Stillwater have dreamed up for your tasting pleasure.