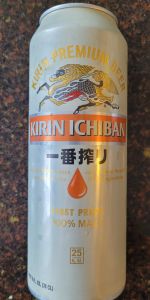 Notes: Kirin Ichiban is one of the world's most unique premium beers. The Ichiban shibori process uses only the most flavorful portion of the finest ingredients.

Wow only 64 I actually really liked it! I I tried it from a small bottle gave off a nice multi aroma beautiful golden light color I actually had some nice hoppy flavor to it as well! Definitely a premium lager!

L - Poured from a bottle into a Pilsner glass at 50 degrees. One finger white head. Minor lacing.

T - Taste follows scent. Light bready malt. Not hoppy at all. No bitterness. A little buttery. Easy to drink.

Tall can of Kirin Ichiban, billed as first press 100% Malt, pours a crystal clear, light straw gold with two fingers of foamy head. The head has… surprising staying power? Or maybe not? If I was more objective I wouldn’t be so surprised, expecting a macro to be as bad as the Labatts and Coors of the world. This looks objectively great. Straightforward and crispy lager aromas of strong cereal grains and toasted malt. Slightly grassy background. Classic and straightforward.

Unfortunately, the palate falls short of the appearance and aroma, which are both straightforward but very nice. Not that the taste is bad per se. The malt is more gentle, but the grainy taste of a lager is here. Slightly bready in character, slightly grassy with the mildest of bitterness, the taste is washed away by a slight watery sensation. Light bodied as can be expected with medium carbonation that can only be described as crisp, there is a nice prickliness on the tongue that quickly washes the beer down on each sip with a very snappy character. The only thing left each time is a very, very mild biscuity, gently malty bread finish.

Objectively, if you’re honest with yourself on the feel and look of the beer (and the taste being thoroughly average) each rating would absolutely clock way above the Avg on BA. Hard to see people here rank it so low on looks when lagers and pils from Anchor, Founders, or Deschutes breweries are given almost perfect marks despite looking nigh identical. The beer is thoroughly unremarkable in the taste department but by no means *bad*. If anything, this beer clocks above most macros simply by way of avoiding the completely washed out corn adjunct taste of most macro beers, and avoids the metallic tinge common to all too many canned macros.

Would I go out of my way to have this again? Unlikely. Did I enjoy it more than most macros? Absolutely. Is it bad tasting? Not at all. Most Asian-themed, Chinese, and Japanese restaurants tend to have limited selection on tap, so is this something I’d order over other ones there? Probably yes!

When people say ‘hey the beer snobs hate macros but I love my crisp and clean beer!’ THIS is the taste I always imagined. Bud, Coors, Labatt, Busch, all are unsavoury in some ways, some metallic, some unfortunate corn-y tastes. Kirin Ichiban surprisingly outpaces all of those beers.

Important Identifiers: Kirin Ichiban First Press 100% Malt, poured from a 473mL can. No canning date, but drank from a large shipment from the LCBO, likely fairly fresh. Can bottled and brewed under license by the Labatt brewery in Canada, rather than the Japanese brewery.

Despite copping backlash for being "yet another generic mainstream lager", this beer actually carries itself well. Yes, there's some corn and a bit of grass, but it's moderately hopped, crisp and generally well put together, which is exactly what this beer should be.

In the glass, it pours a shining golden yellow. The Head quickly disappears and carbonation is not exactly jumping out of the glass.

Aroma-wise there's not much there. Perhaps some crackers and bread and the faintest floral hoppy note.

Taste-wise it's dry, moderately bitter and carries unmistakable biscuit with some corn and grass, but none of the offensive blandness that can characterise some generic international lagers. For mine, it's the moderate floral hoppiness that carries this beer, and it does so in a way that doesn't unbalance the beer given the relatively light body.

Mouthfeel is dominated by significantly more prickly carbonation than is evident from sight, but it's not an unpleasant or overbearing sensation.

Overall, this beer is what it should be. It's meant for consumption without significant contemplation, and its dryness and relatively neutral taste profile means it would suit most foods. If you expect a hoppy, fruity craft lager, you'll be disappointed. if you expect a reasonably generic international lager boosted by a moderate but not overbearing bitterness, which is what this beer is, you'll be pleasantly surprised.

Pours clear yellow with a short-lived head of white. Corn bread with a touch of honey in the nose. Light bodied with a crisp mouthfeel. Toasted corn flakes on the palate with minimal bitterness and faint malt. Finishes watery and timid in flavor.

12 oz. bottle poured into 13 oz. tumbler
Look: 2-finger creamy head, light golden almost transparent color, heavy carbonation
Smell: Strong bready aroma hits you right away, a little fruity,
Taste: Malt forward, slight bitterness, some sweetness on the back end. A little more complex than a typical macrobrew.
Feel: A tongue tingler, mouthfeel pretty typical of lager, dry finish. The flavor lingered after finishing the glass,
Overall: A middle of the road beer. Would I get it again? Probably, if the mood struck and I was doing a Japanese-themed meal.
Pair with hamburgers, pizza and fast food. I wouls also go with sushi, Ramen and a teriyaki or yakitori.

Meh American Lager!!! Pours a nice clear gold color with a big fizzy white head that fades fast. Thin bands of lacing on the glass, head retention is less than average. Taste and aroma is the "rice and corn" background with a little maltiness and some mild grassy hops. There is bit of a metallic taste here too....Not great. Mouthfeel feaures a lot of carbonation and an overall weak, watery "feel". A lawnmower beer at best.

Bought at a Ramen Restaurant in Lejona (Spain). 330 ml poured into a glass.

-Almost no head of foam. Pale yellow colour.
-Herbal and herb smell. Not strong but not weak.
-Rough taste. Not bad but nothing special.
- Carbonation can be felt a lot. Really a lot.

Pours a deep golden color with a tin topping of a white head. Nice lazy carbonation bubbles abound. Head is dissipating into the beer.

Smell is like a clan lager. Big punch of like a bready smell. There is a bread that is made with lots of eggs and I cannot think of the name. This smells like that soft pillowy bread.

Very nice hit of that 100% as advertised malt right up front. The malt does taste seems to have just a faint hint of sweetness. That punch of malt up front leads one to think that this may be a heavier full flavored punch. Yet the sneaky part is halfway across the tongue this flavor profile fades to a nice clean lager.

Mouth feel does seem a bit more toward medium but can be deceiving due to the fairly crisp finish.

The rating on this beer is to low. I am sorry but this is sitting at a 64! No this beer deserves better than that. I will say if you have not tried this beer get you some. If you like a nice clean easy drinking lager this one works. And at 5% ABV a person can still afford to have a few. Cheers! And hats off to the brewers of this beer!

Back in days, I had the Kirin ichiban that was made in Japan for several times, and I would say it’s totally different thing when compared with that made in North America. The Japan version has a very distinct fruity taste, and I don’t know why, it’s not like the 1664 which use orange peal as ingredient, but still, fruity.

This one pours a clear golden straw yellow, with a small head, and lots of lcaing.

This smells metallic and skunky, with a grainy sweetness and some corn.

This is not very good - I was curious because I had never tried it, but I guess perhaps there was a reason for that. It's got that vegetal bitterness a lot of these cheap lagers have, with no real hop character. It's not inoffensive enough to be even worth it.

This is light bodied, with a harsh finish - it's not all that drinkable.

I can't really recommend this one. It probably wouldn't pair well with food, either.

I bought a can at the lcbo in Ontario
poured a 2finger head into glass that leaves a lace as you drink it
a very refreshing and enjoyable beer from Japan.