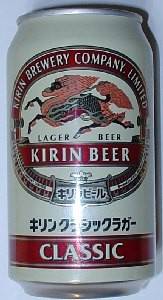 Kirin’s old types of beers are much more worthwhile than its new ones. The Lager (in a bottle) was a quite okay beer - to an extent that I might consider it the best rice lager in JP - so I was tempted to try this classic-looking Classic. It is not as impressive though as the Lager, but it somehow reminds me of a European lager, I guess because of the slight malty sweetness to it. Otherwise it’s not bad but I would definitely choose the Lager over this - if was to choose from Kirin, of course.

500ml Bottle in Dotonburi area of Osaka, Japan (¥280):
Very much a basic pale lager with the usual corn & maize adjuncts coming through with touches of maize & rice not far behind. There was a faint sweetness to this one at points & I managed to get some hay & grassy hops further on but there wasn't a whole lot to this beer & it's one that I could have lived without trying.

App: Average Asian beer. Piss yellow with a 2 finger head that disappears considerably quick. Has a lot of carbonation and I had a really cool swirly carbonation that I was pretty impressed. Maybe it's just my bottle but what the heck, it's pretty cool.

Smell: Nice sweet smelling malts and that's it. There is also a bit of skunk smell in the beer.

Drinkability. It's a light beer but the lack of flavour makes it not drinkable.

Not my favorite lager but it has character.

Appearance - Looks like a typical Japanese beer from Kirin. Golden in color, white head, bubbly, and some lacing on the glass.

Smell - It's got a nice aroma. Not very strong up front but if you get a good whiff, you can detect the hop, and malt, as well as some rice and whatnot. A little sweet smelling.

Taste - It's pretty good. Not very rich for a lager but it's good. The best part of it is the finish. It's got a nice bitter finish that makes you feel good.

Mouthfeel - Not so creamy but it's not so watery either.

Drinkability - I can go for a couple of these but there are more interesting beers to move on to after having one.

Overall, it's an OK lager. Just not the same as others.

For starters, this beer is MILES better in the bottle than in any size of can (from 115mL to 2L)! This is an unprejudiced bottle review.

Appearance: Looks like it's supposed to look, pours decently from the bottle, with half a centimetre of head, a decent amount of lacing, and the colour of a diabetic's urine. For the style, good.

Smell: Not altogether septic, smells like any good-by-Asian-standards Asian lager. Definitely comparable to Tiger or Asahi Super Dry or any of those other well-known so-called Premium Lagers from Asia. I can smell some adjunct presence but it's not overwhelming, and the grassy hops smell like a Bavarian field in the springtime, which is enough to give it a pass on the aroma side of things. PLEASE NOTE that smell and taste are quite strongly affected for this beer when poured from a can.

Taste: Cold. Well, there's some hoppiness there. I don't know what to tell you - it tastes like you're drinking a beer, and if it's a cold beer in hot weather then it's not bad - it's not skunky and it's not overly artificial-tasting so it gets a pass for taste as well.

Mouthfeel: Again, better in the bottle than in the can. Easy to swallow, doesn't leave any gross feelings in the mouth etc etc etc.

Drinkability: Higher than almost all Japanese beers I've had since arriving here. No adjuncty aftertastes, easy to get down, and actually quite satisfying.

Overall: Despite the inconvenience, and the extra weight in the backpack when riding a bike etc, it's worth getting bottled beers here (well, I guess that's pretty true anywhere). Even though I can get a choice of fifteen beers from a vending machine 100m from my house, it's worth going the extra mile for a bottled beer that's at least marginally better.

Kirin's beers are easily better than those of Asahi, and better than most of Suntory's beers. But since everyone drinks beer from the can here, it's hard to find a variety of Japanese beers in the bottle. I suppose the popularity of the can in Japan can only be understood by those who have had to sort the garbage in this country.

In short - quite a good Japanese beer. I wouldn't call it a rice lager; while rice may be involved, it's been pretty well eliminated from the final product, as evidenced by a non-slimy palate after finishing the beer. Mouthfeel is OK so rice content is under control.

Not bad, worth a try, one of the best easily-available Japanese macros.

Appearance: I'm tired of trying to come up with new adjectives or similes to differentiate between these cookie-cutter Japanese lagers. It's clear and yellow and that's all you need to know.

Mouthfeel: Frothy and spritzy and slick and syrupy.

Drinkability: Oh, how I tire of these fizzy, yellow beers. Even so, this one is pretty well put-together and largely inoffensive. More chuggable than drinkable.

taste, mouthfeel and drinkability? that's right, you guessed it. very predictable and incredibly boring. but at least i have a funny line to put in this review. *ahem*... these PRETZELS are making me THIRSTY! ... thank you. you see, i already know this beer is macro fizzy crap, but i want to review it because i am trying to review as many j-beers as i can while i live in japan. so i got some pretzels to eat along with it. and you know what? not so bad. i'll give it an average drinkability score because it sure does a good job of washing down these salty beer snacks. other than that, not impressed.

the reason i'm not totally bashing kirin classic lager is because it's not so bad for the style. it's a style i will probably never get again once i move back home, but at least it's not as god awful as happoshu.

A pretty good-looking cream foam head on this beer that reminds of a boiling mud pit. The smell is worty and fairly unappetizing, although strong.

The taste has a bizarre chemical/processed/sour mineral element mixed in with an otherwise not too bad taste, positive on the hops, big on grain flavor. A big, stranglehold carbonation sensation that was pretty awesome.

They're copying off Sapporo I believe with the "classic" idea--from Sapporo's "classic" beer offering.

Big rocky white head that lasts to the bottom of the glass. Hazy yellow body. Very spicy hop aroma for a Japanese lager with plain pale malt background. Quite more aromatic than the Ichiban Shibori.
Plain pale malt body flavor with rough bitterness.
A bit of harshness on an otherwise insipid beer.