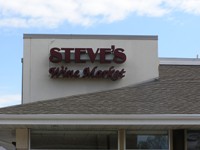 View: Place Reviews
Reviews: 19 | Ratings: 38 | Log in to view all ratings and sort
Reviews by rossracing:

Steves, along with Riley's and Woodman's, has a deep selection of quality beer. Steve's also has some of the best prices, and their beer lady is always incredibly helpful in suggestions. Generally speaking, they do not hold beer reservations, but they will special order the beers that they can that are not in stock. Between Steves and Rileys, you can find almost any beer that hits madison that you would want to try (assuming you get there before it sells out for the limited release stuff).

Oh, and they have GREAT cheeses and a large wine selection too!

I love living a mile away from this place.

I heard about this place during my visit in Madison and was a bit of a drive out away from the UW campus. I found it to be quite nice - it’s a quasi upscale wine and cheese shop, with quite a nice selection of beer - they had the usual wisconsin micros, regional micros that are sometimes hard to find in the state, interesting Belgian beers, Stillwater, New Glarus, a few 3F bombers that I was not able to find in the other places. The staff was a bit aloof, but fairly nice - prices were on the high side, but they give you 10% off after six bottles.

After visiting Steve's on Mineral Point a few times, the realization came that i'd never been to this Steve's, possibly due to the average reviews. I'm happy to report the selection here is great, with plenty of things I didn't see around elsewhere.

Beer is the first thing on the left when you walk in. A door or two were devoted to singles, and I noticed about 5 FFF bombers that I didn't see elsewhere. Opposite the coolers were separate shelves for imports and US craft (bombers, 750s). Local craft seasonals were a strong suit, as were Belgian (Mariage Parfait, Rodenbach Vintage), German, Scandinavian (Mikkeller), and English imports. Locals: O'So, Rush River, Ale Asylum (Ballistic), Sand Creek reserve series, South Shore (bombers), Capital, Lake Louie, and more. Full lines from the majority of these breweries. Also plenty of US craft beers from the Bruery, Founders, Dark Horse, Jolly Pumpkin (seemingly scarce around town), Bells, Goose Island reserve series, and more. The selection was dense and varied, lots to see, so take your time to look around.

Checkout was quick and the cashiers were pleasant. There wasn't anyone on the floor in the beer area, but the staff seemed approachable if you need help. Stop in at this Steve's, you won't be disappointed.

I stopped here when I first moved back to Madison after school. I was near Hilldale getting lunch, and I saw Steve's across the road so I decided to walk over.

The service wasn't anything out of the ordinary. The employees sat behind the counter while everyone picked out what they wanted. The selection was decent, but nothing spectacular. They had a variety of Wisconsin beer, DFH, Bear Republic and more. There are other places in Madison that have a better selection though.

Not a terrible beer store, but it didn't stand out in my mind so I don't plan on revisiting.

Candyland. I'm from Milwaukee, and even the beer stores there don't compete with the vast selection of Steve's micro brew selection. I like how they categorize their beers geographically!

They also post beers that are "new" and beers that are "sale" by putting stickers near the prices. I find this helpful, although they put a "new" sticker by Lakefront Eastside Dark, which is definitely not new. Perhaps someone got stuck in a beer time warp?

I stopped here after an interview today. I was a little reluctant to go to this location based on the reviews. I didn't think they would have a great selection. Boy was I suprised. I was like Chunk from the Goonies in an ice cream shop when I walked in the door. Coming from Minnesota we have some great beers available. Wisconsin blows us the hell out of the water. At this location they had Dogfish head, new glarus, stone, capital, lakefront, viking, bear republic, great lakes, bells, founders, sprecher, sierra nevada, 3 floyds, and even smuttynose. There were many other standard craft brews that I can't even remember. For all the brewing companies listed above, they had the flagship brews and usually a few rare/once brewed beers and seasonals. To give you an idea of what was there, here was what I got:
--6-pack Smuttynose Finest Kind IPA
--4 pack DFH 90 min IPA
--Stone Arrogant bastard bomber
--Stone Oaked arrogant bastard bottle
--Stone RIS
--Stone Ruination
--Stone IPA
--Stone PA
--Stone smoked porter
--New glarus mixed pack (organic revolution, fat squirrel, IPA, and spotted cow)
--New glarus raspberry tart
--New glarus belgian red
--Stone Vertical Epic 08/08/08-last bottle

I was astounded by the selection. In addition to the great american crafts, they had a ton of Belgians. They had all the chimays, rocheforts, and many others. If this liquor store was down the street from me, I would be broke. That was the only downside by the way. It was a tad bit pricey. But it was so worth it. Definitely check out one of the "Steve's" locations if you are in Madison. I will be going back there again soon.