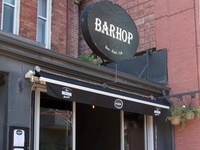 Rated by yancot from Canada (ON)

Great, intimate bar feel, but some tables a little cramped. Sizeable selection of constantly changing local microbrews and a huge selection of cans to take home. Decent selection of food, burgers are alright, supreme fries are absolutely killer. Super friendly service, but it can sometimes take a minute to get to you.

Definitely somewhere to come back to whenever I'm in town!

V - Dark and small and tables/seats too close together. A typical old school beer bar. - 4.0

S - Disorderly, a bit pushy, not entirely knowledgeable about the beer in the menu. - 3.75

Sel - A good variety, but a bit lacking on the high ABV and roasty beers at such a turn of season time. - 4.0

F - Disappointing. A good beer bar with a limited selection of food and at my visit a number of menu items were unavailable. - 3.75

Reviewed by eberesford from Canada (ON)

Reviewed by FaradayUncaged from Michigan

4.54/5  rDev +6.1%
vibe: 4 | quality: 4.75 | service: 4.5 | selection: 4.75 | food: 4
Great place to stop and enjoy some of Canada's best offerings. Gave it a visit during a quick stop in Toronto and was not disappointed. Service was great and the selection was better than expected. Beers can be ordered by the taste, in 4-beer flights or separately from flights. Food prices were the only negative, but that comes with the territory of being within the city (or so I assume).
Mar 31, 2016
Rated: 3.94 by simplejj81 from Wisconsin

Rated by Kurt_Berger from Canada (ON)

4.41/5  rDev +3%
vibe: 3.75 | quality: 4.5 | service: 4.5 | selection: 4.5
Stopped by late and the place was hopping (Sorry). A single room with a long bar and the usual seating accommodations here and about - or should I say aboot? Great selection of brews in a lively atmosphere makes for a pleasant part of any Toronto Beer Tour. I enjoyed the following local crafts: Indie Ale House Couch Surfer, Northwinds Route 26 and County Durham Black Katt.

The King Street West location is right on the streetcar, which you can hop on any time.

Reviewed by KATCanada from Canada (ON)

4.25/5  rDev -0.7%
My main beer place in Toronto. If you want drinks this is the best place to do it in Toronto. Belgians, American stuff (Evil Twin, Jolly Pumpkin etc.) Laid back atmosphere with knowledgeable servers. Good mixed crowd. Good whiskey selection also.
Only thing preventing a higher rating is the food. It sucks.
If you want the best Toronto beer experience, go here. If you want to eat and drink try Beer Bistro or Bier Markt.

3.85/5  rDev -10%
vibe: 3.75 | quality: 3.75 | service: 3.5 | selection: 4.5 | food: 3.5
Walked from the Hilton Garden Inn on Sunday June 22nd afternoon (maybe not the best time too enjoy a brew or two) + the World Cup of Soccer is being played , NY Yankee's are in town !!
V-patio is small , cozy and right on a major streetcar route , the sun is shining so we can deal with the downtown noise
Q-expect more from downtown Toronto as this was the first place we visited , very noisy (no atmosphere)
S-seemed to be understaffed , patio service was slow getting drinks & food , especially food
S-great beer selection even with the server/waiter 'that's a big beer sir' & 'are you sure' type of attitude
my sister Michele enjoyed a couple of India Ale House 'Breakfast Porter' and I got to try Great Lakes 'Thrust' & Bellwoods 'Witchshark'
F-the seafood poutine was horrible not recommended
prost LampertLand

Reviewed by beckerboots from Canada (ON)

4.06/5  rDev -5.1%
vibe: 3.75 | quality: 4.25 | service: 4 | selection: 4.25 | food: 3.5
This place is a little gem. Read some of the BA reviews and had to visit. I was not disappointed. Stuck right in the heart of a major steetcar intersection ( I believe due to construction). I had the idea it would be noisy, smelly and busy. What a shock. King Street is always a high traffic area, but inside the friendly confines of Bar Hop it was beervana . The beer menu was user friendly; in fact maybe too much. The communication with my non-drinking wife ceased. I was too engulfed in ABV's IBU's and Plato to hear about her Eaton Centre exploits. Note To Self: Do not make a habit of this. Our server was very in touch with the product. Food options were limited, however good sized portions and prepared to order specifications negated this drawback. Two cask offings and a plethora of micro brews made this a memorable experience. Tried the County Durham Cask and a Leftfield Saison. Both were served in proper glassware at the correct temperature. Biggest testimonial from that wife of mine, who pretty much hates every beer place in the world. She said she would return to Bar Hop because she enjoyed the food and ambiance. I love her for that type of candor.
Jun 03, 2014
Rated: 4.25 by bumchilly25 from Canada (BC)

The wait staff was very knowledgeable, friendly and prompt.

And the beer was great. They have ~20 taps pouring local craft beer and have two rotating casks. I did not spend a lot of time reading over the bottle list, but it seemed to have a lot of options, but maybe no whales.

The atmosphere was inviting and overall, I had a very enjoyable lunch!

Reviewed by MarcatGSB from Michigan

It's a small place, kind of nestled in between some of the taller structures down on eastern part of West King street (if that makes sense).

I didn't get the chance to try any of the food, although the lunch crowd seemed very happy and the food appeared to be tasty, as MasterSki mentioned, kind of glorified pub food, which is fine and dandy with me. That sort of thing works well with beer, hence why they have been doing for years and years.

The draft list was very impressive. Mostly Toronto beers, with a few from surrounding Ontario area. A very well rounded draft list though, with everything from quite a few selections of Pale Ales and IPA's, to some local odd ball things like a wine barrel aged Saison, which was damn delicious. The bottle list is sufficient, but nothing that compares to Beer Bistro or BarVolo. Honestly, the tap list is much better at BarHop than Beer Bistro tho.

A great place, I'll probably wander back over there today to try some of the grub and get another pint or two, cool place.