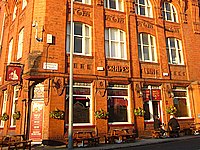 Quite simply one of the most remarkable Victorian Brewery Taps I have ever had the pleasure to drink in. A totally authentic, stunningly beautiful Bar that serves the full regular range of high quality Real Ales from the Robert Cain Brewery, and all in the peak of condition. If it is summer, take your drink, walk outside, face the building, look up and gasp in awe at the simply breathtaking complex high rise architecture of this Victorian leviathan. Robert Cains Brewery is THE remaining working personification of all those Old Posters and Adverts that you may have seen depicting the many archetypal sprawling Victorian English breweries from the late 1800s. Built in a time of great civic pride, and a true offspring of the mighty Industrial Revolution, this is a building that was constructed to produce beer, and great quantities of it to the working masses. A resplendent well-preserved moulded red brick façade with many engraved windows  it simply does nothing to hide its sheer class, breeding, pedigree or heritage.

The Cains Brewery Tap is open to the public, and is housed within the Robert Cain Brewery on Stanhope Street (nearby the modern Gatehouse entrance). It was returned to its former glory in 1993, and in doing so, it has gained many awards for its accurate and sympathetic refurbishment from such esteemed luminaries as English Heritage and CAMRA.

The Wooden Bar itself is a literal marvel to behold. Many of the Cities craftsmen from the shipbuilding hometown of the Titanic, also worked on Bars as well as Ships. It Shows. Parts of the bar counter with scrolled supports, were rescued from a neighbouring pub prior to demolition and can only be described as being of the highest calibre.

The Brewery Tap serves the full range of Cain's traditional ales, as well as up to 3 ever changing Guest Beers from other Independent Micro-Breweries and a Real Draft Cider. The food is superb and typically wholesome, as is the friendly and very helpful service. Real Breweriana, and not cheap copies, adorns the walls.
A true Liverpool landmark that is only a 15 minute walk from the City Centre, and a great place to drink great beers.

Probbaly the largest Working Piece of Victorian Breweriana you will ever see.

A locals place with lively conversation and an unpretentious air. The beer is regional Cains and is good with other stuff as well. The food is not bad at ll and very cheap. The thing that makes this place is the wood work; the bar, the paneling, the scroll work in certain places. It is a must visit if you want a low-key Liverpool experience.

Right on the Brewery gates, this is an impressive pub.

The woodwork thoughout is very ornate, a true work of art which should be seen by as many people as possible, so make sure you visit this bar if you are ever in Liverpool.

The beer (Real Ale) is of course all Cains, which isn't a bad thing. They do also sell fizzy stuff if you can't handle the proper beer.

Fair distance from the centre of the city, or any other place of interest, but as I have already said, a must visit bar, when in Liverpool.

Visited this place when i was on holidays at a friend's house at Liverpool. Victorian Style beer pub which serves many traditional Ales. The atmosphere is dominating English Victorian Style and i have to admitt that this pub has LOT of wood in it. Very attractive place with good and friendly people around. As far as food is concerned I'll be honest and tell you guys that i haven't tasted the food and therefore i can't tell you my opinion about how it tastes. What I can tell you though is that this place has a variety of choices in it's menu. Great bar that really impressed me