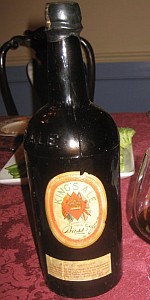 Reviewed by Beer-Zombie from Oregon

Onto the beer: I was a little buzzed when I got to sample a one ounce pour. Going off memory, the beer was dark and consistent like soy sauce. Aroma of teriyaki, leather, earth. Flavor was dust and must, plum, raisins, leather again. Easy sipper. No carbo. Full bodied.

I've had a lot of beers, and I have been brewing for about 4 years. But once you try a beer that is over 100 years old, nothing else even matters. Great experience

It pours a dark brown with hues of red, no foam, no lacing. As expected.

Smells of caramel malt, leather, tobacco, very fruity of the dark pitted kind, notes of sherry and more than a hint of fruity tartness. Oxidation is obvious.

Yep, the oxidation took a turn to the tart side; damn cork. Still has lots of sherry notes and leather, light sweetness, but really, it resembles a wine more than a beer at this point. Strong too, lots of heat in the swallow.

Full bodied. A chore to drink. 3rd time seeking this brew out wasn't so lucky.

Reviewed by KooVee from Finland

Amazing very clear colour that is somewhere between ruby and tawny port. No foam to speak of.

Amazing aroma. Unlike anything else I have ever smelled. One could sit for a while just sniffing the beer. Tobacco, leather, hard to define aromas that are so complex, elegant and strong if such a combination makes sense. Like it is one or two phases past / to the 2nd or 3rd power of the usual dates, figs and raisins of aged beer.

Taste matches the aroma with even more subtlety. Hard to associate with anything else except fine 30+ yo port or a 50 yo famous vintage of wine, out of things I have tasted. Yet, this, much older bottle, felt like it could take on another century, whereas those benchmarks were definitely at the edge of senile. One bottle was not showing any signs of being oxidized, the other had slight signs of acidity and oxidation, but not to any distracting degree. Aftertaste is endless.

Really a sui generis beer one should taste at least once. Does not really obviously resemble anything going by the name of barley wine today. One has to bow to the skill of the original brewers. The balance is amazing after such a long time. As a homebrewer, I am trying really hard to understand how this was possible, but I would bet besides the obvious on the live yeast. The bottles had a very thick layer of a dark mass of dead yeast on the bottom. I still have two more bottles left... could the yeast still be resuscitated....?

Reviewed by olradetbalder from Sweden

5/5  rDev +22.2%
Vintage 1869. Fan f-in tastic!
Dark brown, no head at all. Loads of cork in the glass.
Almost no smell, smells a bit like an old garbage can or sours.
Taste is amazing, like japaneese soysauce.

3.49/5  rDev -14.7%
look: 3.5 | smell: 3.75 | taste: 3.25 | feel: 3.75 | overall: 3.5
Big thanks to Jedwards for the final pre-move blowout cellar crash. Brewed in 1902 and bottled in 1905. Served in an Oerbier stem. Pours the appearance of soy sauce with no head. Nose expresses sherry, leather, root cellar dirt and raisins. The flavors on this beer are extremely strong and overpowering - leathery, tobacco, and acidity are over the top. Finish reveals rich chocolate. Mouthfeel is medium-light with a still carbonation and quite a bit of acidity. I have to say that this beer has held up incredibly well; however, the flavors are just way too intense. A splash was more than sufficient.
Jun 09, 2013
Rated: 4 by drummermattie02 from Texas

Reviewed by tjmodica from Texas

4/5  rDev -2.2%
look: 4 | smell: 4 | taste: 4 | feel: 4 | overall: 4
1902 Vintage decanted at Eb's 8/23/2012
Wow a 110 year old bottle of beer I'm stoked fro the opportunity to try this, Thanks a million Chris!
Pours into the glass a murky headless red brown liquor with faint legs when swirled. Wow that nose is rank. Musty cellar fumes mixed with sherry, wet cardboard and band aids. there a hint of caramel sweetness in there as well, but its hard to find under the other aromas. The flavor is more funk and earth with lots of sherry and dark fruit notes. A bit more funk and some plastic phenols round out the flavor. Medium body with a non existent level of carbonation and a harsh acidic sherry mouthfeel. How the hell do I rate this? Its clearly an oxidized mess, but the novelty alone makes me glad I got to try it.

Reviewed by woosterbill from Kentucky

A: The cork practically disintegrated into the beer upon opening, but a quick pass through a coffee filter yields a clear mahogany body that is totally still, and doesn't show much in the way of legs. It's ok, but not as attractive as the 1929 Prince's Ale that started the tasting.

S: Whoa, that's nuts. Hugely cheesy, musty, woody. Cobwebs, moldy bread, and madeira. It's improving as it warms and opens up, but the profoundly funky cheese not is tough to get past.

T: Big caramel sweetness up front, followed by the woody + musty notes from the aroma. Luckily the cheese doesn't come through. It's actually pretty darn tasty, and especially so for being older than the Model T.

O: How can I not give this a perfect score for Overall? This damn beer has been through two world wars; when it was brewed, mankind had never flown.

Reviewed by Pencible from Virginia

Tasted on March 13, 2010. Thanks to Traquairlover for sharing!

This poured a clear but very dark cherry mahogany with no head. It smelled like malt vinegar and iodine and port and raisins and prunes and leather and cigars, with some molasses and alcohol and brown sugar. It tasted like tobacco and port and walnuts, with some raisin and date and molasses and alcohol, and a bit of malt vinegar and leather and cigar smoke. It was thick with no carbonation, and had a lasting sweet aftertaste. Overall this beer has survived and thrived! Impossibly delicious after 108 years. It was fantastically complex with deep scents and flavors unlike any other beer. I could sip this for a long time. Every taste brings a new element of character or nuance to the flavors. And they all are balanced against each other in perfect harmony. Simply unforgettable.