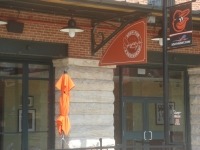 For what it is and it's location this isn't all bad. I mean right in the outfield of one of the most beautiful stadiums going right?! Large open windows right onto Eutaw St. The beers have always been ok over the years. On my most recent trip this week the IPA was pretty good. Service has always been attentive even in the thick of a ball game going on. A red, a wheat an IPA and a golden ale or something is the offerings. Taking no chances here. Have never had the food but there were at least 20 people having lunch on a February Wednesday so it can't be all bad. Take it for what it is. Don't expect much and go with the flow. You'll be ok. They always have a 16 ounce aluminum bottle Bud if need be.

Bartender was nice but the service was pretty poor, the beer was mediocre, and the food was so so. Too many breweries in Maryland to go back to this one.

Could the location of Dempsey's be any better for a baseball fan? Oriole Park is less than a throw away, the brewpub is housed inside the brick warehouse as seen on TV, and as a bonus, the Inner Harbor is just a few blocks away. With the O's out of town, wiggling into the brewpub was very easy. Lots of space inside, and a large oval shaped bar as the anchor. As I would have expected, there is some Orioles memorabilia on the walls.

Four different house beer pouring from tap (Wheat Ale, Golden Ale, Red Ale, IPA), selling at a reasonable $3.50 per 14 ounces. Flying Dog and Sam Adams were also on-tap, and for containers, around 30 options that included Lancaster, Starr Hill, Union, Heavy Seas, Old Dominion (but don't expect the same prices as the house beer). Thank goodness that guest beers are available, because after one house golden ale, I was not impressed. Upping the experience, the bartender was quick to take my order, and the beer menu does offer limited information of the guest beers (style, alcohol). This might be a decent place for a few beers in general but for house beers, I just hope that the golden ale was an aberration.

Typical overpriced sports bar, saved only by a selection of a few good craft beers. House beers (Dempsey) are average. I am an O's fan so I am slightly biased here. Otherwise would rate as a typical sports bar.

Went here during the off-season for lunch on a random Sunday afternoon. Pretty cool setting and really neat that it's basically in the stadium, and high top tables with large glass windows look right into centerfield which is a nice touch.

Place was pretty much dead but the bartender was very attentive and cheerful. Looks like they brew 4 beers which are always on tap (doesn't seem to be any seasonal or special beers). Tried a flight of all 4 which only cost $3-4 for pretty decent sized pours. The beers are pretty average to be honest, but drinkable none the less. Full pints were also only $3.50 or so, but get as low as $2 during Happy Hour. Ordered some food which was above average, although I highly recommend the 'bacon on a stick'... it's exactly as awesome as it sounds and is served in an empty 6 pack of bottles. Apparently it's won several awards and bacon competitions as well.

Anyways, if in the area I'd definitely stop by and check it out.... there's plenty of TV's and cool Orioles swag around and gives you a chance to try some locally brewed beers, but nothing I'd go way out of my way for.

Was in town to catch a few ball games and stopped in here after the game because you could not get near the place before or during the game. Good beer selection as well as four brewed by Dempsey's. Their red ale was their best brew in my opinion. Food selection is paired down on game days but still good. Also as I was there after a game, Rick Dempsey showed up and took pictures with fans and signed autographs. Cool place.

Stopped in here on a non-baseball game day and the place was dead. The place has plenty of glass and has a nice view of the baseball stadium's upper deck, but you need to be out on Eutaw St to look at the field. Definte warehouse feel here but it is also bright and airy. Light woods and a lighter grey bartop create a decent atmosphere. Four decoritive brew tanks with the names of the four beers are at the end of the bar. Loads of TVs here as it does fit the sports theme well.

This place offers four house beers - an IPA, Red Ale, Wheat, and a Gold. Not too much variety but the place is relatively new. We had pints of IPA and Red Ale, and both were very dull and uninspired. The IPA sported some citrus tones but little hop presence and the Red Ale was one dimensional - but again this place is for Oriole game day, so for the masses they may feel these house beers are great. Some other standard macro beers were also available.

All in all this was a short stay after finishing a pints. Not really a true BA destination despite the fact they make some beers here.

Dempsey’s Brew Pub & Restaurant in Baltimore, MD
Brewery rating: 3.23 out of 5 with 18 ratings