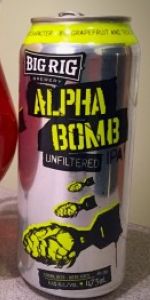 I bought a can at loblaws in Ontario poured a 2finger head into glass. hazy golden color.
hoppy and tropical fruits flavor.
meduim bitterness. and some malt .
leaves a lace as you drink it.
overall this unfiltered IPA beer is very good.
enjoyable
cheers.

A very hazy pour and tropical/citrus on the nose. It's very hoppy, but that's balanced by the tropical fruit notes and a creamy mouthfeel (not unlike a lot of milkshake IPAs I've had). Overall, very tasty and dangerously drinkable.

Too many big hop beers figure all they need to do is hop punch you in the face and walk away saying, "My work here is done.", leaving the bombed out wreckage of your palate by way of big fisted hoppy bitterness.

Not so with this brew. Big hops, but with just enough subtlety to make it work. The hops are tasty, backed up nicely by malty goodness. Grapefruit, some sweetness, soft on the palate. Hazy, big pillowy head, spotty lace. Not just one dimensional, so it works.

Pours hazy brass with a frothy, clingy head. Grapefruit, pine, mango and other tropical fruit in the aroma. The same hops fill the first sip. Some coarse bitterness in there too. The mouthfeel is medium bodied with creamy, full carbonation. Medium bitterness and some mouthcoating astringency in the finish.

An OK IPA with a bit of astringency that distracts. I won't try it again - many better IPAs on offer in Ontario.

Nice head on the pour, shows some lace.

Taste is a bit muddled, lots of flavours, but it doesn't really work. Some underlying vegetal/celery as well.

Moderate body has some serious hop acidity, with a crisp finish.

Pours a hazy golden-orange hue, with approximately one inch of bone white-tinted head situated atop. Over the next ten minutes, give or take, it settles down to a creamy cap nearly 1 cm thick, accompanied by a generous collar of foam and some unevenly splattered lace. Looks great, although the nose is comparatively quite muted - I'm getting muddled orange and grapefruit citrus, with green herbal-floral notes and plenty of resiny pine. There's also some bready malts and caramel sweetness, with suggestions of tropical fruit - papaya, perhaps?

The flavour consists of a bready, caramelized malt backbone overlapping with some decidedly green hop notes. Citrusy orange/grapefruit notes and hints of papaya are discernible mid-sip, with the pithy flavours of the former soon being overtaken by the potent hop astringency of the back end. Earthy pine resin, dank herb and floral bitterness round out the profile, with these flavours persisting through the finish and into the aftertaste. This IPA almost seemed approachable early on, but the 84 IBUs seemed to build with each sip - meaning that this is a brew I would only recommend to seasoned hopheads. Medium body, with low carbonation levels that meekly agitate the palate; the overall mouthfeel is rather smooth and a little slick. A bit of a palate shredder, with the unrepentant hop bitterness & acidity reducing this one's drinkability, IMO.

Final Grade: 3.8, a B+. Alpha Bomb is the first Big Rig IPA I've tried thus far, and I have to say it's pretty much what I've come to expect from this brewery - a perfectly serviceable brew, but not necessarily one that stands out from the rest of the class. As someone who drinks IPAs quite regularly (and is generally unfazed by their bitterness), this one is beginning to approach my tolerance limits. Reminds me of Amsterdam's Boneshaker - which, for the record, is an IPA that I do not mind drinking, but also do not pick up very frequently. Take that as you will.

Fresh can from Sobeys ottawa for 2.95. Good bitterness but needs less malt/sweetness and more fruity notes.

kelvarnsen from Canada (ON)

Copper and slightly hazy with no carbonation. Topped with 6 fingers of off white head, which leaves a nice lacing.

Very umami, biscuit and cracker like qualities along with guava, pears, pineapple and oranges. There's a solid grapefruit bitterness as well.

Excellent, well rounded IPA bursting with tropical fruit notes both on the nose and on the tongue. Drinking in New Hamburg, Dec 29th, 2017.

Looks beautiful; pours lightly & uniformly cloudy golden-orange with a nice fluffy white head. Aroma dominated by grapefruit. Taste is grapefruit & tropical with hints of pine, light grassiness, lemon rind, & mild astringent bitterness at the finish. Mouthfeel is light/smooth with just the faintest hint of wanting to be Mosaic-smooth. A pretty good Ontario IPA; I'd drink it again but have others to go to which I prefer to this one.