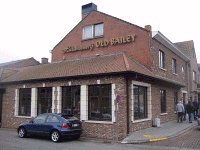 The Old Bailey describes itself as a Home Brewery. Opened in early 1996, but I visited it at Easter 1999. It is a very modern, impeccably presented, large brown brick building set in a small but apparently affluent village. It comprises a Brewery, a Tavern/Tea-Room, a Restaurant, and 2 Functions Rooms - one for 80 people, and the other an impressive Cathedral like room that holds another 300, so it can get busy. This is an extremely well thought out and constructed Home Brewery, money was clearly no object whatsoever during construction, and this is reflected in the very high quality of the Brewery Plant and the Fittings & Fixtures in the Bar and adjoining Rooms. The Brewery was totally custom- designed, fabricated and installed. It is visible through a large glass door at the very end of the Building. There are no recycled dairy tanks or loose floor tiles here, everything has a place, is always in its place and the Brewery is very spick & span indeed. So much so, it looked under utilised I have to say, I have a distrust of clean Breweries.
3 Beers are brewed at Old Bailey, a Wheat Beer, Troebel at 5%, a not-so Bruin at 5.5% (more of an Amber/Pale Ale) and a Blonde Ale called St. Honoré at 6.5%. All were available on draft, and served by a waiter that had more efficiency than Commander Data from Star Trek. House Beer was above average, the St. Honoré the best of the bunch for me.
In addition the Old Bailey has other beers available, comprising a mix of the famous (including Orval) and some changing local beers from Flanders (including Poperings Hommelbier on my visit). The food was excellent and good value for money.
Food menu was limited but what was served to our Party of 30, or so, was good value and extremely good.
An extremely impressive, accomplished and very well managed establishment, with an almost perfect house brewery and bar. No doubt time will remove some of the sterility that is inextricably linked with this perfection. I for one was just dying to mess up the perfectly aligned Tables and Chairs.