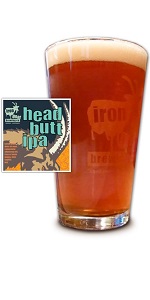 Great IPA and local for me !

32oz grunt/howler/mini-growler/growlette/whatever purchased at the brewery for approx. $6. I've had this numerous times in the past, but have yet to formally review it until now.

Poured an extremely clear, copperish shade of amber, with a decent-sized off-white head.

Piney tree sap aroma along with...strawberries? My palate is just good enough to be dangerous, but even with that caveat, I'm a little mystified by the aroma. I know this was originally brewed with southern hemisphere hops, back when IG first opened. Maybe it still is, and that's a hallmark of the particular hops used (Greg & Heather, one half of the couples that are the owners/brewers, have told me the hop bill, but I can't remember what it is). It's a thick hop aroma, but there's enough of a malt backbone to keep it from being too much of a hop bomb.

This tastes like what I would call a Pacific Northwest IPA: Piney taste upfront backed with citrus. The piney flavor is almost too big, and might well be too big for people who don’t dig that. I do, but just sayin’. The fruity, strawberry flavor I detected in the nose is present here, but it is subordinated to the piney aspect of the flavor. There’s also a sweet, honeyish flavor that I’ve never picked up on before. It’s kind of in the background, but it’s there. Despite its being a “regular” IPA rather than a double, this is a BIG, flavorful IPA.

A little bit too big in the body for me to rate in elite numbers for the mouthfeel category. Oily, resiny mouthfeel.

When I want an IPA that is big and fresh (it’s brewed about two miles from where I live, so it takes some work by an incompetent bar manager for it not to be fresh), and not too alcoholicly massive this is what I tend to think of. This and Riverkeeper (from River City, and a totally different kind of IPA) are my two current favorite IPAs on the local beer scene. Unless something tragically changes, I’ll be having this again.

A really good IPA with a dry bitter finish. One of the better IPAs in tow.

Reviewing from memory. I've had head butt several times both at the tasting room and at a couple other places locally.

This is arguably the best IPA being brewed in Spokane right now. I can fault its appearance a little due to it being very cloudy each time I've had it but other than that it's a go-to.

The aroma is dank and pops right out, which means the hop flavor follows. Bright, citrusy, great beer.

Bright pine and citrus hops on the nose, very light grain. Similar on the tongue. Drinkability is very good. Overall, a good, solid, enjoyable example of a "Classic NW" IPA. worth having.

22oz bottle, thanks be to IronDjinn for bringing this to our most recent backyard BBQ catch-up.

This beer pours a hazy, medium copper amber hue, with two fingers of puffy, tightly foamy, and somewhat creamy bone-white head, which leaves some stringy dissipating lace around the glass as slowly dissolves.

The carbonation is adequate in its plain-Jane frothiness, the body a decent middleweight, and smooth enough. It finishes off-dry, just, as the gritty malt persists, and the mixed and matched Pacific Rim hops keep on keepin' on.

A good IPA, sure, but a bit unbalanced in the malty background to be deemed a stellar example of the style. Still tasty, though, and easy enough to put back as thoughts turn to my fryin' up some cheeseburgers duties.

Mouthfeel is medium, a little bit of what I would call "fluffy". Overall, this is a good solid beer. Don't turn it down if you run into it.

Poured into a Seattle Beer Week pint glass. Pours a medium coppery amber with a nice two finger white head with good retention and lots of lacing; looks good. Aroma of caramel malt, citrus and lightly grassy hops, lemon citrus. Flavor is caramel malt, piney and citrus hops, orange and lemon citrus; finishes with resinous piney and citrus hops, high in alpha oils. Medium bodied with light creaminess. A classic Northwest style IPA with a good, flavorful malt body and hefty hopping that really comes through in the finish. The finish is a little unbalanced towards alpha bitterness than herbal hop flavors, but the flavor that is present is quite nice. Glad I found a bottle of this on my recent trip through Spokane and it invites me to try some more ales from this brewery.

Pours a hazy orange under a magnificent foamy head. Nose has orange up front, followed by some sweetness, and a "clean" sort of sensation in the back of the nose. I don't mean soapy, as I don't think it's a flaw thing, just a very nasal passage opening quality. Like what menthol does, just without the menthol smell.

Taste immediately brings that orange that the nose mentioned, which pretty quickly takes a bit more of a grapefruit direction. The sweetness plays in a little towards the middle but moves out of the way in time to allow for the lingering lemony and bitter finish that sets up an enduring lemony essence for a while after this light to medium bodied beer is long gone.

Maybe not the most heralded beer on earth, but that doesn't matter because I'm pretty smitten with it. Great no nonsense, straight up IPA.

Poured from a 22 oz. bottle into a Snorkel glass. No date that I can find.

Appearance: Deep golden orange body, finger's worth of head full of tiny white bubbles. Large islands of lacing all over the the glass.

Aroma: Getting plenty of citrus, mainly orange with a little earthiness. Definitely getting some malt presence as well.

Taste: Oh, yeah plenty of orange in this! Pine and some grass makes itself known as well.

Mouthfeel: Kind of light which is surprising. But very easy to drink with a light amount of carbonation and a juicy finish.

Overall: This is a good beer to drink on a hot day in my opinion. Not overly bitter and decently balanced. A minimal amount of lingering bitterness is there, but not bad. Very tasty.

Thanks to beertunes for this one!