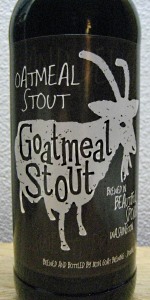 32oz grunt purchased at the brewery. I’ve had it numerous times, but have never actually reviewed it. Apparently this and the Trashy Blond will be the first bottled beers from Iron Goat, available locally by the end of the month.

Poured an inky black, utterly impervious to light. There was an inch or so of mocha-colored foam. Spotty lace.

Mollasses, dark chocolate and coffee in the nose.

Bitter and sweet tasting, with the bitter, coffee flavor and roasted malt notes and roasted in the lead. There’s a little bit of pipe tobacco and some booziness in the background, although the alcohol content isn't particularly high.

A really great oatmeal stout, a little more bitter than others I’ve had, but it makes for a more complex beer. I’m excited this will be one of their bottled choices, and expect I will be buying it regularly.

I had a Tap-A-Draft jug filled with Goatmeal Stout at the brewery. Poured in to a holiday stein.

Smell is a sweet cocoa and chocolate aroma.

It tastes a lot like the aroma, coffee, charcoal and dark chocolate.

Mouthfeel is full bodied, creamy and smooth with a mild bitter finish.

Overall a very good stout. Best in the area.

Had this on tap at both Jones Radiator and the Tasting room at Iron Goat.

It's always poured a bit cold for my taste but once it warms up you start to get the creamy mouthfeel and roastiness that's supposed to be there in an oatmeal stout.

I do find myself craving more character overall, perhaps that's a function of the yeast they use but I don't know.

It's a good beer, man. One that I'll keep ordering.

This beer pours a fairly solid black, with subtle basal cola edges, and two chubby fingers of puffy, broadly foamy, and mostly just bubbly tan head, which leaves some random splattered and streaky lace around the glass as it lazily bleeds away.

The carbonation is quite low and unobtrusive in its genial frothiness, the body a solid middleweight, and more or less smooth, which seems kind of underwhelming, given the guest grain ingredient. It finishes trending dry, as the malt, cocoa, smoke, and other sundry players converge somehow on that line of reasoning.

Not a bad, if yet somewhat twisted attempt at gerrymandering beer styles (overt smoke in a sweet oatmeal stout, for those not paying attention) - the base oatmeal stout character as resolute as ever, while the roasted character runs a bit rampant, to no one's real benefit. As mentioned, agreeable enough overall, but eventually you're gonna step back, and wonder why you just don't go straight and true in your choice of base beer qualities.

Another bottle from Jake65. Big, heady aroma, normal taste for the style. Cool name and label. Roast, chocolate, something off in the aroma. Tastes is roasty, some smoke and some coffee bitters.