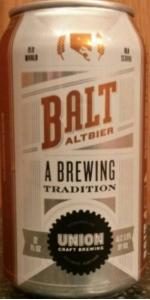 This German-style Altbier is our nod to an old world, old school ale. The word “Alt” is German for “old”, and refers to the traditional style of brewing before lager yeast was discovered. Balt is a dark, copper colored brew with a creamy head, a gentle bitterness and a clean, dry finish. Prost Hon!

Good Lord! I CANnot remember who provided me with this beer in furtherance of Thee CANQuest (TM). EDIT: It was the venerable tone77, my local, in-person trader! Yay! Credit where credit is due, I always say.

From the CAN: "Old World Old School"; "A Brewing Tradition"; "Start a New Tradition Recycle This CAN"; "This German-style Altbier is our nod to an old world, old school ale. The word "Alt" is German for "old", and refers to the traditional style of brewing before lager yeast was discovered. Balt is a dark, copper colored brew with a creamy head, a gentle bitterness and a clean, dry finish. Prost, Hon!"

Ah, the Baltimorons! I had never heard them referred to as such until my first encounter with John Waters. As a movie buff, I was elated to finally meet the man and he was up to his billing. I toast the master of schlock with this beer.

I had my CAN glass at the ready and directly following the Crack!, I instituted an inverted Glug. This resulted in a massive two-plus fingers of dense, light-tan head with great retention. The ex-Old Lady did not dig when I would pour this way, but since we are no longer together, I really don't care what she thinks. Color was more deep-brown than coppery (SRM = &gt; 22, &lt; 27) with NE-quality clarity. Nose had a musky scent, kind of an anise, chocolate and caramel, but heavy. Put some of this in an atomizer, spray it behind your earlobes and stand by, ladies! Mouthfeel was medium, but the tastes of milk chocolate and caramel were immediate and obvious on the tongue. The finish gave it a minty character that was undoubtedly from the hops. This seemed bigger than its advertised 5.5% ABV, but that was no problem for me. This was quite good, but too much on the sweet side for me.

Thanks to Lucular for this undated 12 oz. can that been hiding in the fridge since it’s arrival. I had the pleasure of having Kolsch in Cologne, but not Altbier in Dusseldorf. I intend to fix that, someday.

Pour is lighter than expected, dark orange, plenty of carbonation. Nose is dominated by chestnuts roasting on an open fire, bit of grain leafs. Leaves. They have leaves, right? Not bad.

Balt is creamier than A Cherry Berry suicide. Lovely dark malts, enough nuts to - is that a squirrel I hear chewing through the wall? The middle rolls in with sweet malts, slight roast, & a slight earthy bitterness. Slight spice on the end, though it’s the nutmeat that sticks with you.

This seems like a good beer for an early October night out on the deck with a dead cow smoking on the grill. Simple & direct. Good, solid beer.

A: Pours a dark brownish amber color with a good bubbly ivory-colored head with decent carbonation.

M: Mostly smooth on the palate with a good touch of bitterness near the end.

O: A nice tasting, malty altbier with good flavors of bread/biscuit, dark fruit, and brown sugar. Somewhat reminiscent of Brewer's Art Resurrection, though with a bit more dark fruit and a touch more bitterness, and more of a lagery wheat feel. Quite drinkable. Nice version of a not often seen style. Brewed right around the corner from where I grew up.

From the can, it pours a solid amber with a nice thick off-white head. Pleasant scent of toasted malt and caramel. Taste is similar, with a nice light bitterness. Yum!

Reminds me of an English pale ale. It is earthy and little sweet. Hops are on the back end.

Overall it is a very subtle and smooth very well balanced. That being said taste wise it isn't really exceptional. If you're a real fan of the style I'd try it but for someone like me I think $10 a six pack is just a bit too much for this.

A-dark caramel about 1 finger head
S-mostly pine,grass,and earthly notes
T-getting some hps up front followed by an piney bitterness. Finishes kind of sweet with the malts.
M-light and smooth mouthful, med body and carbonation
O-not bad pinic beer. Could see myself knocking some down after mowing the lawn.

Pours an almost crystal clear medium-dark copper. The head is a fizzy light tan that has barely any retention. The aroma is malty, bready and a little sweet. The taste is also malty, with similar qualities to the aroma. There's a slightly metallic quality on the finish after the first sip but it eventually disappears. The body is lighter and easy drinking with just a hint of carbonation.

A - amber with a short, sudsy off-white head.

S - smells sweet and a little chalky with a faint whiff of banana.

T - tastes like an intriguing mix between an amber lager and a Belgian witbier. Sweet and a little syrupy with caramel malts at first, but hints of Belgian spice follow - vanilla, clove mainly. Also a touch of tart apple.

Mouthfeel is medium and a little syrupy for a second, but turns soft and slightly chalky, which is another interesting element of this beer and another strange tie between an amber lager and Belgian.

Overall, an interesting, easy-drinking amber ale that could sub in nicely for more boring party beers like Yuengling or Blue Moon.

Balt Altbier from Union Craft Brewing Company
Beer rating: 85 out of 100 with 196 ratings