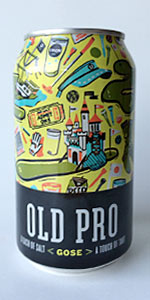 Notes: A dash of salt. A touch of tart. That’s what makes this unique German-style wheat beer a seasoned professional at serious summer thirst quenching. With its glowing golden color, peach & citrus nose followed by a prickly mouthfeel that leaves a gentle tartness and a dash of salt on the palate, the Old Pro never fails to bring you back for another sip.

Thanks to Lucular for this colorful 12 oz. can. I haven’t had a gose in a while & looking for something to break up all the dark & heavy. This fit’s the bill.

Pours like a white wine: light, nearly colorless, & after only a minute or two it could pass for a non-carbonated adult beverage. Smells just like Tamarack State Beach in Carlsbad, CA without the pleasing visuals.

Old Pro should have found a way to get a Morton’s sponsorship on that can somehow. Saltier than my fourteen year old eyeing her jobs list, the tang of sea air in the back of the throat dominates here, as it should. Anything else is a sideshow: mineral water, mild acidity. Sharp, quaffable.

And extremely simple, but that’s no knock here. Single-celled beers seldom work, but this one does. Very good.

Ladies and gents, I have found my new favorite American-style gose. Just deliciously tart and salty, easy to pound without even trying, I just wish that I had asked for more of them in the recent trade.

Can't get to Westbrook's distribution area? Live in the DC metro area? Like Gose style beers? This is THE one for you.

Can opens with a pop and a bit of head rushing out the top. Carbonation level is on the higher end, but it's a creamy texture as opposed to a gaseous one. Pour looks like straight Mountain Dew with the froth of a root beer. Solid.

As the beer fills my over sized nostrils, I'm reminded of my years living along the oceanfront. Briny and salty with waves of citrus. Orange and lemon with some wheat. Perhaps a slight bit of funk, but not entirely noticeable unless you were looking for it.

Salt and acidity. That's what this beer does. Once it hits your lips, prepare for an explosion of flavor from this little 4% scrapper. Lemon-Lime acidity with orange and a hint of coriander. The salt is all over the place...not subtle in the slightest (and I'm not one to use it sparingly on food). A bit of sweetness, but less-so than with say the Westbrook. This is straight sour and salt, definitely not one for the uninitiated. Some of the reviews below definitely reflect this.

Mouthfeel is what you would expect for the style. It's a highly chuggable summer beer that goes down fast and furiously. The head does add a bit of a creamy texture, which does eventually dissipate if you can wait for it. I'll take one of these to the face after a run and not even realize that I downed the can in a single, albeit large, gulp.

Overall, this is just a fantastic little beer. Chuggable, thirst quenching, sour deliciousness in a dirt cheap little can. I wouldn't recommend this as a first Gose to somebody who's not used to salt in a brew, but I'd have to guess that they would not be the target audience. I don't live in their distribution network, but I'll pick up a case of the stuff every time I'm across the border. There's currently at least two in my closet as I type this.

Many thank larryi86 for this little diddy.
a little fruit at first and then citrus and tart. A slight backing of wheat.
Cloudy yellow with a nice white cap.
Very nice thirst quenching quality with the tart balanced with a nice settling malt/wheat foundation. The tart has a very tasty citrus. The salt isn't clear but I can taste in laying on the tongue.
Kinda' light but appropriate. Bubbly and smooth.
I'd like to get more of this one.

As gose-y a gose as you're gose-ing to get! I love the can art, and the description of the Old Pro reminds me of a few characters I saw growing up on the Jersey shore. Anyway, the smell is a bit citrusy and sour, with a good helping of vinegar. The first sip is a wave of salt on the front of my tongue which quickly dissipates into the sour, bubbly brine of a beer. Besides salt and vinegar, and both flavors are very present with neither being overwhelming, there's a bit of dry wine flavor, like a brut champagne or just a very dry pinot grigio. Almost no aftertaste besides a bit of sour brett flavor, which doesn't last too long an encourages more sips. Not an everyday kinda beer for me, but a good example of a style which I consider a nice occasional treat.

Poured from 12 oz can into shaker pint.

S: Tart lemons mixed with salt and coriander. Faint earthy funk lingering around in the back.

T: Lemon juice with a hint of lime. Briny salt and a little coriander.

M: Light and refreshing. Finish is tart and slightly salty.

O: Nice cool down beer on a hot day. Not a normal style for me, but it sure did hit the spot today.

It is the perfect summer Baltimore beer.

Canned March 24 according to the ink on the bottom of this 12oz vessel.

It is a very milky, unfiltered pale straw color with a fizzy white head that almost disappeared before I could take a picture of it.

As much as I love a Gose, I run into this occasionally with the aroma. Unfortunately, it smells very much like vomit. It is very sour with a lot of lactic acid, some salt, and a little lemon. I hate when this happens because it is really hard to overcome, but I tend to be pretty sensitive to it.

There is a puckering sour lemon and acidity up front with a touch of spicy corriander, follwed by some sea salt that seems to tame it a little. The wheat is very subtle. Barley noticeable to me.

The body is not nearly as carbonated as I would have guessed and had that signature soft feel.

I like the seemingly traditional approach, and having only tried American versions it may be more representative of the style than I scoring towards. This one is certainly drinkable overall, but seems pretty unbalanced toward the sour end to me. Some more wheat grains would probably help quite a bit, and letting it warm up seems to help.