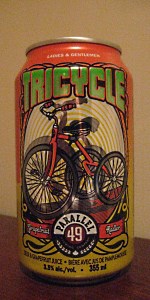 Grapefruit radler from a 12 oz can at the Fall 2016 L.E.A.F.
Looks more like pink grapefruit juice but tastes like a 50/50 mix of grapefruit juice and light lager. Light carbonation with minimal visible effects.

A: Pours a murky deep golden yellow in color with light to moderate amounts of active visible carbonation along the edges of the glass and faint orange highlights. The beer has a finger tall fizzy foamy light beige head that reduces to a tiny patch of extremely thin film and a very thin ring at the edges of the glass. Minimal amounts of lacing are observed.

S: Moderate aromas of grapefruit juice over the top of hints of grainy malts.

T: Upfront there is a hint of slightly sweet grainy malts followed by slightly stronger than moderate flavors of grapefruit juice. Not too tart and not too sweet. No bitterness at all in the finish.

M: Light to medium bodied with moderate amounts of carbonation.

O: Super easy to drink and refreshing, I could easily have a few of these in a session. Solid grapefruit juice flavor and aroma.

The beer comes in a rich golden yellow, absolutely hazy.

The beer hits of straight grapefruit juice up front. Fleshy yellow grapefruit, the juice, the slight hints of tart. Then onto a light malty quality that shows itself as a malt beverage in the end. Medium carbonation to move the beer along.

A brew that one could drink for an extended amount of time, as intended, but the great grapefruit flavor really helps this beer out.

Parallel 49 'Tricycle Radler' @ 3.5% , served from a 355 ml can
A-pour is a cloudy pink from the can to a cloudy pink in the glass with almost no head
S-grapefruit
T-tart , somewhat refreshing
MF-low/mild carbonation , weak body
Ov-it was left behind for me to try , one & done
prost LampertLand

Pours a light amber, smells of citrus. This is a very quenchable summer beer. Very light, grapefruit comes on strong at first with beer notes after. This is a highly drinkable beer, one could easily put away quite a few on a hot day!

355 ml bottle served cold into a Amsterdam snifter. Purchased as part of a taster's pack for what worked out to $2.30 CDN per bottle.

Smell - Lots and lots of grapefruit with a slightly offputting rotten fruit smell. It's not prevalent but detracts from the otherwise deliciousness of the grapefruit.

Taste - Lots of fresh grapefruit than increases in bitterness as you go, not only through the bottle but on each sip. Very mild graininess lurking in the background.

Mouthfeel - Smooth and refreshing with a dry finish.

Overall - As far as radlers go, you could do better and you could do a lot worse. Passable and refershing but filler as far as I'm concerned in the taster's pack.

341 mL bottle from their "Unparalled" mixed six-pack, currently available at the LCBO. They included a new beer in this year's sampler (that's good!), but the new beer contains sodium benzoate (that's bad). OK, it's probably not inherently bad - but how else am I supposed to awkwardly shoehorn a Simpsons reference into this review? Served well-chilled.

Pours an opaque apricot colour, producing one finger of fizzy, very short-lived white head. It's gone before I've even placed the bottle down on the table - no lace or collar, with only a few foamy wisps on the surface. It pretty much looks like sparkling grapefruit juice. The aroma does little to convince me that I am drinking something that contains beer - again, it's nothing but grapefruit zest and juicy citrus pulp on the nose.

OK, now I feel like I'm just going to be repeating myself for the rest of this review - because it more or less tastes like a mixture of grapefruit soda and sanguine/blood orange. Moderately sweet and tart initially, with a touch of juicy orange flavour - however, the bitterness of the grapefruit pulp dominates much of the sip, leaving behind a pithy astringency that quickly fades in the aftertaste. Light-bodied, with lively carbonation levels - it feels fizzy and crisp on the palate, like a radler is supposed to - though the pulpiness makes this one feel a little fuller on the palate than most.

Final Grade: 3.5, a B. Tricycle Grapefruit Radler is only 50% beer, but that fraction still seems a bit high by my estimates. I have had a lot of radlers over the past couple of months - many were worse than this, and only a handful of them were better. For what it is, this is not bad at all. I expect that fans of grapefruit soda will probably love it - the differences between the two drinks are minimal at best - but personally I'd prefer it if there were at least some residual evidence of the base lager's presence. Refreshing, yet forgettable - not something I would have bothered putting into the sampler pack, but as a summer patio thirst-quencher, it'll do.

F: Sour but a nice taste to it.