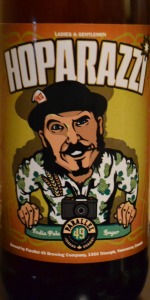 355 ml bottle served cold into a pint glass. purchased as part of a taster's pack so it works out to $2.30 CDN per bottle. So far so good as the ruby ale was quite tasty and the radler was better than most out there/

Appearance - Slightly hazy orangy copper color with a finger plus of long lasting white head. Some carbonation contained within and a few strings of lacing left behind.

Smell - A nice medley of hops, some of the leafy and earthier variety but citrus hops in the aromas of orange and grapefruit also peek through. Solid biscuity backbone that is non-descript but does its job nicely.

Taste - A little bit of citrus with orange, lemon zest and a hint of grapefruit being the dominant culprits. Can taste a nice flavorful biscuity lager underneath the initial hop push. Very balanced.

Mouthfeel - Smooth and crisp, with very solid carbonation. Probably on the heavy side as far as lagers go, but this one does pack significant flavor and decent ABV, so a really light feel was unlikely.

Overall - Probably the winner with the Gypsy tears from this taster's pack, Hoparazzi is a very well made IPL that I would be more than willing to shell out cash for on a regular basis provided prices were reasonable. This is definitely a brewery I will keep my eye on in the future.

This west coast IPA is a great beer for those that are just getting into Pale Ales or India Pale Ales. It has the citrus hop aroma that one expects from an IPA, but even though the IBU is rated at 50 it doesn't come across as really bitter. I suspect this beer will please both the uninitiated and the old pros.

A good beer. Not as balanced as others.