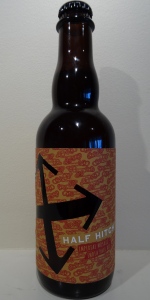 Hops climb up twine that’s just loosely tied to the trellis with a half hitch knot—and this Imperial IPA is just loosely tied to tradition. The Mosaic hop imparts surprisingly floral aromas instead of the more expected grapefruit-y notes. On the palate, complex layers of flavors might remind you of guava, mango, stone fruit and lemon, unraveling your idea of what an Imperial IPA should be.

This is a tasty and smooth IIPA. Brew date reads 12/9/2019 and I'm enjoying this on 1/14/2020. Snifter glass pour and the nose is very faint. The taste however is very complex. The look and color, are on point. The mouth feel is a little flat for me. Definitely Worth enjoying. Pour cold and taste at different temps. It will pay off

This is REALLY an imperial IPA. Hot and sexy, like a 1930s starlet dosed with perfume and lounging in a fur-trimmed negligee. Maybe I'm fantasizing, but this is one lush and lovely big hoppy brew.

Golden color with plenty of white foam. Fruity, but on the lemony side, with papaya, passion fruit. The label mentions guava, which is also right on as guava lingers in the aftertaste. It's a new flavor in my vocabulary, but Mosaic is the Boss Man hop. A little bit hot, but the alcohol is more of a force of nature than a flavor.

This is not very bitter at all. It's just total hop delirium. From the 375 ml bottle purchased at New Seasons Market in Portland. A rather pricey six bucks, but then you'd spend it to have that luscious lady, so what the hell. Make yourself happy and get a bottle.

Fucking delicious. This beer comes strait out the bottle with some 'tude. Mosaic hops bounce off the walls and strait into one's awaiting shnoz. Passionfruit, mango, melon, and a touch of balancing cattiness. The mosaic hop dominates this brew in the most loving way, like an older sister before you outgrow her. But, much like the sister, the hops are nothing without a solid base. Your hips will never wield the same pinning-power. The malt back bone in this beer delivers a smooth, sweet, caramely horse for those hops to ride in on, and finishes with a slight crystal bite that helps to clear the tongue of the otherwise lingering mosaic bouquet. This beer rocked my socks off, and made my spine tingle.

Poured medium-dark amber, beautiful and persistent off-white head, readied my tongue and belly for some mondo bitchin drinking. Highy recommended for homebrewers who like to play with hops.

A-The beer is mostly clear and orange-golden colored. A one-finger-tall head of white foam has good retention and leaves a nice coating of lacing on the glass. I can see a bit of carbonation keeping the head alive.

S-The aroma is quite tropical with suggestions of mango, peach, and mandarin orange. Malts are pretty light and on the sweet side of things with honey notes creeping in.

T-The taste is more of the same: lots of juicy tropical fruit and citrus flavors that trend towards sweet instead of outright bitter or pithy. There is a mild hit of bitterness on the finish that suggest pine and grapefruit. Alcohol is well hidden here.

M-The body is medium to full in heft with a bit of stickiness and coating feel. Carbonation is average.

O-A nice juicy example of an IIPA and good first beer from Crux for me. If you like your hops on the tropical side of things, look no further. Maybe not the most complex beer around, but I would drink more of this if it weren't so expensive.

Aroma is big sweet tropical citrus, like a freshly cut grapefruit. Must be the Mosaic talking. Nice and pungent and clean.

Taste is likewise full and flavorful, with lots of pale malt evident on the first sip to balance all those juicy hops. The hop bitterness is somewhat subdued, with more focus on their bright clean citrusy character. High ABV is well hidden.

Overall a really nice DIPA that knocks you down with pure flavor. More drinkable than a lot of high-ABV DIPAs.

A: Hazy darker gold with plenty of head and lacing.

T: More of the same, honey sweetness with some mango, papaya, even pineapple? Some dank/green character as well. Hop bitterness strikes a bit in the middle of the mouth but never gets too crazy...the background sweet booziness is another nice component.

MF: Signifant body in this one, lingers for awhile on the palate. Lighter carbonation too. Some dryness, expected with the abv and hops, but it's relatively balanced.

Started with strong malt taste. After airing out the hop flavors opened up and provided a well balanced taste.

Can I submit a review of beer on draught? Northwoods in Battle Ground lucked into a barrel! 8 oz pour in a Belgian glass. Golden opaque pour with lacy, frothy head that quickly subsided. The hop profile in this is a hop heads wet dream - citrus and tropical fruit, clean finish. Your mouth will never know its 10%!!

I have had this beer before on draft, and it is fantastic. First time testing it in a bottle.

Pours a two finger white head into my can-style glass. The head is pillowy, not quite creamy. Head retention is good, after a few minutes, a solid finger remains. After about five minutes, the head is mostly gone, but some serious film is left on top of the body. Lacing looks like it’ll be nice, but we’ll see about that. Body is golden orange in color, visibility is fairly high. Carbonation looks medium-high. So far a great looking beer.

Aroma is perplexing. I first need to start off by doing something I shouldn’t do, and that’s comparing it to what I recall the draft aroma being like. I recall this beer being a tropical bomb on the nose (very well representing the mosaic hops), very smooth, with low indication of alcohol. This version is different. Slightly booze astringency on the nose, very low for a double IPA, but higher than what I remember. It smells a hair oxidized, slightly too sweet, rough grains. For being drank two months after this was bottled, and at 9.5% these things really shouldn’t be an issue. I have on good authority that this beer was stored properly. Bitter aroma is there, but not in my face. Perhaps some light tropical fruit aromas, but not much compared to what I was expecting.

On some sniffs, you get a smoother, more pilsner like malt character, cleaner. As this warms, some of the aromas are coming out more, I’m definitely picking up more mango, melon. The off smells are also becoming less apparent as this warms. More fresh, bright, not as “stale”. Overall, the aroma improved to what I would consider “good”. I’m hopeful the flavor will “pop” more.

This is a damn smooth beer for 9.5%, with a heck of a lot lower sweetness than some of these damn double IPA’s, as well as a noticeable enough fruit presence, light mango, light papaya. Booze bite is hardly there, with a small twang that is almost welcomed. I think the best characteristic of this beer is how sessionable it is, which makes it very dangerous at 9.5% what I’m getting at is that it isn’t terribly complex for a double IPA. Not necessarily a bad thing, but somewhat surprising. Anyways, overall it’s a smooth flavor, subtle fruit, easy bitterness blends with an acceptable booze twang. Malt profile is not what brings the sweetness, it’s light bodied, and very nice. Getting some vanilla notes at the end as well. It’s an easy 4, I don’t think it’s quite a 4.25, but it is a tasty beer.

The mouthfeel is….interesting, good though. A light bodied double IPA, with a light sweetness that coats your mouth. The beer is probably a hair under carbonated for my liking, it’s definitely a low carbonation, not flat by any means though. For how sessionable this beer is, it works. Not a bad mouth feel at all.

The drinkability is through the roof, probably the most drinkable beer I’ve ever had if you are considering ABV.

Overall I had a hard time grading the flavor of this beer because of my past bias with the draft version. This is a darn tasty beer, but I just want a tiny bit more. Overall a really good beer, I just can’t go all the way and call it great, at least not this time.

The appearance turned out killer, a super resilient head, some impressive lacing, and a solid appearance all around.

Great smell and a lot of cirtus. It does a really good job disguising the 9.5%.

A - Pours a clear medium orange with a large fluffy tan head that fades very slowly.

O - A sweeter and more tropical and floral IPA. I did enjoy it.

Half Hitch from Crux Fermentation Project
Beer rating: 93 out of 100 with 517 ratings