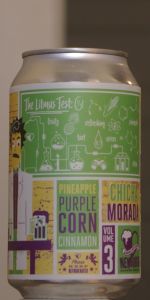 I am finishing up with Newburgh BC for the time being & while I am out of their famous collab beers, I have one that is a bit of an oddball for The CANQuest (tm). It is a Chicha beer, which does not currently exist on here as a style, but it should. You may remember/have heard of Sam Calagione's trip to Peru to try some & then to recreate it in Delaware. No? Well, it is made with maize (real, non-GMO corn) that is chewed (!) by the brewers & spat into jars (!!) where the saliva causes the corn sugars to begin to ferment (!!!). You CAN't get more traditional than that.

My apologies on several fronts. My pic does not adequately portray the CAN's label & I am working to have it removed & replaced. It is NOT a Berliner Weisse - it is Chicha & the closest thing that we currently have is "American Wild Ale". Finally, the name is too brief. I have submitted a ChANge Request to address all of this, but I apologize for my laziness in not having done so sooner. 8=(


I beCAN by Crack!ing open the vent with a great sense of trepidation. I had no idea what the CANtents were going to be like so I employed the slowest, gentlest C-Line Glug that I could muster into the awaiting glass. It foamed up to form just under two fingers of foamy, soapy, fizzy, Rose Pink (!) head with limited retention. Color was Mulberry (#C64B8C)/Hibiscus (#B43757) (SRM = N/A) with NE-quality clarity. Nose had a vinegar-like sharpness, but it was not off-putting. Neither was it a Berliner Weisse, though. Mouthfeel was surprisingly medium-to-fill, not quite creamy, but big for a Wild Ale! 8=O The taste was certainly unique, definitely sour as opposed to tart as I felt in in the hinges of my jaw & in my ears. It kind of put me in mind of a weak Flanders Red, but even that is imprecise. Finish was dry and sour, almost vinous, but even that is imprecise. Boy, this one was tough to pin down. YMMV.

The maize gives it an incredibe dark beet hue. The head is spritzy and a light pink like cotton candy.
I came into this skeptical; I really don't like cinnamon in my beers unless it's a stout. However, the cinnamon here was purposefully added--enhancing the pineapple sweetness and earth from the corn--and far from dominating. The aroma is an enticing blend of sweet pineapple and corn in an almost perfect ratio. Light body with a crisp carb, and soft feel.